C++ programming language supports many mathematical functions. Instead of focusing on the implementation of large source codes, these built-in functions are used directly to avoid space and time consumption, hence simplifying the code and program. C++ has a large set of categories of these default functions. These functions are present in the header file of mathematics that must be included while using any C++ math operation.
#include <cmath>

We will explain some common functions of the cmath library through examples. Use Ubuntu 20.04 for the implementation.

In this example, we will calculate the size of the angle of the argument in degrees. For this purpose, it is essential to add the math library in the program and the input-output stream library must also be included as a header file. In the main program, a double value is initialized that will be used in the parameter as an argument of the sin, built-in function.

A simple syntax for the sin method is declared as follows:

A double value is taken, and the return data type is also a double value. Save the code and execute it in the Linux terminal through a C++ compiler that is needed to compile the code in the Ubuntu system, so we have used G++ here along with –o that will store the resultant output of the file in another output file.

After compilation, execute it with the name of the file.

You will see that the decimal value will be obtained through the sin function.

A similar method is applicable for the cos function. As the cos methodology is declared to calculate the cos of the angle given as a parameter in degrees. The function will take a double value as a parameter and the return type will also be of double data type.

We have applied the built-in function in the cout statement.

We can also calculate the value of tangent by following the same approach.

This example relates to the exponents in C++ and their use. This power function is used in the program to calculate the power of the number or base that is raised to the power of the exponent. In this source code, both the values are of double data types; the base and exponents are written in the form of base power. In other words, the superscripts are the exponents in the mathematics language. This function returns a single integer value. The power function works in a way that the base number is multiplied by itself by the nth number of times the exponent has. For instance, the base is 3 and the power is 4, so 3 will be multiplied 4 times (i.e, 3*3*3*3).

Save the file and run it. You will see that the answer for 3 multiplied 4 times is 81.

For instance, we have taken a negative number here. The resultant value will be a positive value of the same number.

The result of the number absolute is given as follows:

This example is a collection of all the exponential functions. One of which is explained earlier. This will contain log types and exponents as well. 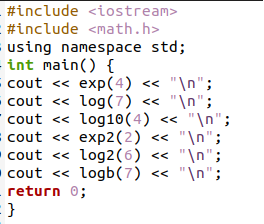 The terminal will display the resultant value of each mathematic function.

We have already explained some commonly used mathematic functions through the examples above. Now, we will describe some other remaining features that are included in the mathematics library. At the end of this article, all of the below-mentioned features will be implemented collectively in the program and we will execute them to see the results.

Now we will use the above functions in the code. 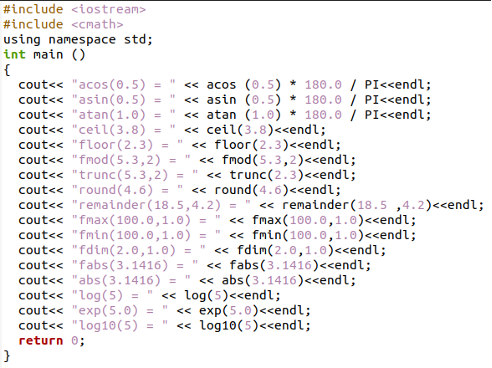 Execute them in the Ubuntu terminal to see the results of each function. 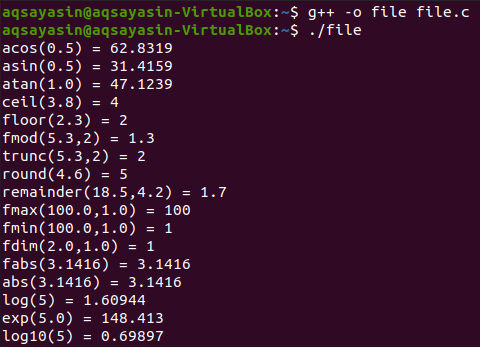 Cmath library is an essential part of the C++ programming language as it provides many operations and functions of mathematics when we use the programs to execute source codes. All of these functions are built-in functions. These functions take inputs in different data types, but both variables must have the same data type while performing the same operation on them. Each elementary example describes the working of the function.