Byobu is a modern terminal text-based multiplexer that supports BSD, Linux, and Mac systems. Byobu allows using multiple windows and sessions, and you can run different commands under the same single terminal connection. The tool is helpful, especially when dealing with remote servers and workspace.

The main reason for using Byobu is to save terminal states. If you are working on a remote server and is connected using a service like SSH, using Byobu will come in handy. For instance, if your session breaks in the middle of an update, you can reconnect, and Byobu will resume the sessions without breaking.

Furthermore, Byobu lets you group different terminal tasks without needing to open multiple terminal screens. It helps keep your screen organized. We will see how you can achieve that.

Byobu doesn’t come pre-installed. However, it’s available in the package manager. You can install it using the following command: 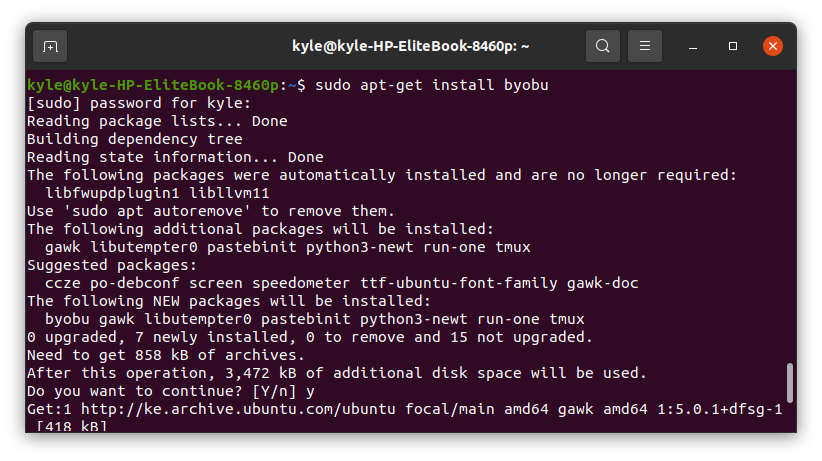 Once installed, confirm the version using the – -version flag.

How to Start Using Byobu

To get started with Byobu, you need to enable it on your terminal. To do so, use the command byobu-enable.

With Byobu enabled, you can now close your session and log back in to use Byobu. Type byobu on your terminal to pen the Byobu window manager.

It should be something similar to the following image:

We can try running a command and then break the connection to see how it behaves. Update your system by running the sudo apt update. Once the update starts, close the terminal window. 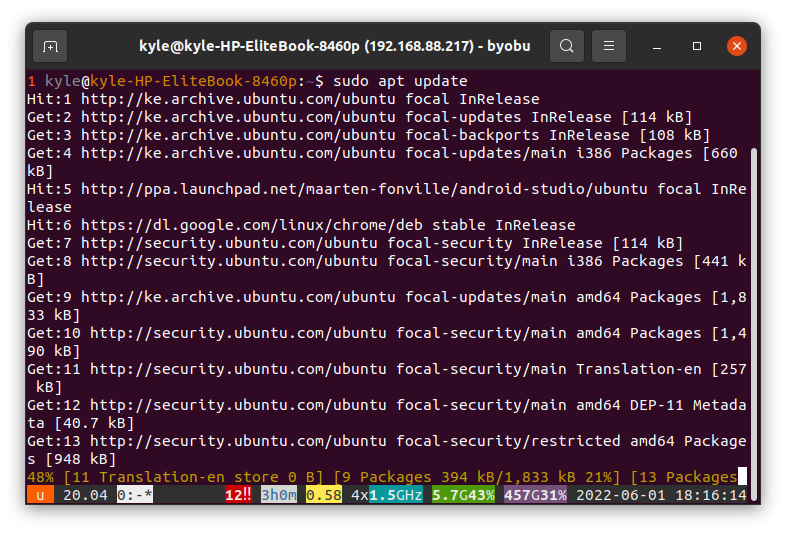 Next, open the Byobu as we did earlier on. 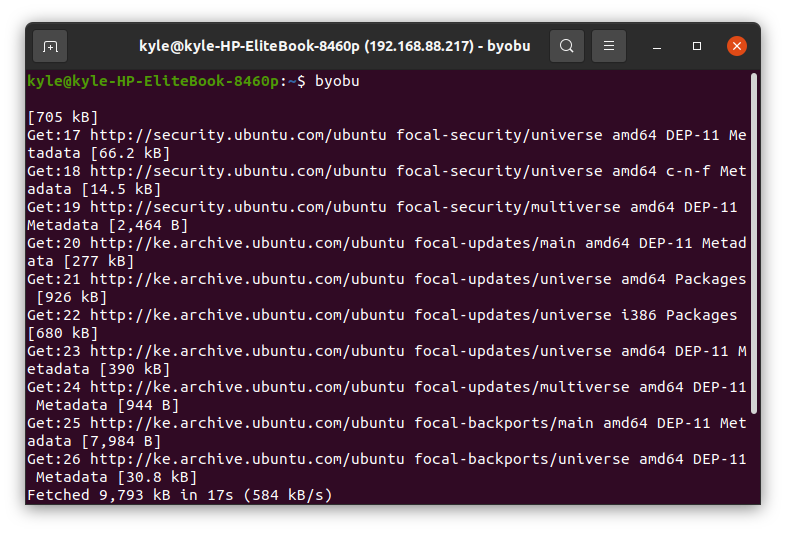 You will notice that the session resumes from where it was interrupted. That’s how Byobu comes in handy to save your workspace even after disconnection.

Once it opens, you can enter 1 to use tmux or 2 to use screen.

When using Byobu, you can choose to enable the colorful prompt. However, you should have it by default. If that’s not the case, use the following command:

Similarly, you can disable it using the following command:

Another great benefit of using Byobu is creating a running instance of different sessions without interrupting each other. The first session starts when you load Byobu. When you create different sessions, you will be prompted to choose which to use when you open Byobu.

Enter the number of the session to open it.

There are different options to use when handling the sessions:

To exit Byobu and close all your sessions, press CTRL + D.

You can move up and down your sessions using the ALT + UP or ALT + DOWN keys.

You can detach a single session without closing Byobu. There are two ways to go about this. First, if you want to close the current session, press SHIFT + F6. Your other sessions won’t be affected. Besides, you can relaunch Byobu at any time. However, when you have multiple connections and only wish to close the active one, press ALT+F6.

Byobu windows help in multitasking from a single connection. Below is a quick cheat sheet for using Byobu Windows:

Press F2 to open a new window. You will get a new command prompt for your window.

Like how you can scroll different sessions, you can press F3 to scroll left and F4 to scroll the windows on the right.

You may need to name the current window to tell its purpose easily. Press F8 and add your name, then press the enter key.

It helps give your windows order, and you can do that by pressing CTRL + SHIFT +F3/F4 and moving the window either to the right or left as per your preference.

When running a command that displays multiple outputs and you need to track the history, you can press F7 followed by either PgeUp/PageDown or Up/Down keys to scroll the history. Once done, press the enter key. If you wish to exit, press the F6 key to exit Byobu.

So far, we’ve seen how you can use Windows and Sessions on Byobu. There is also a way to split the windows either vertically or horizontally. This feature lets you run multiple tasks on the same window. Let’s see how that works.

1. To create a Vertical Pane

Pressing SHIFT+F2 will create a split of your current window vertically. 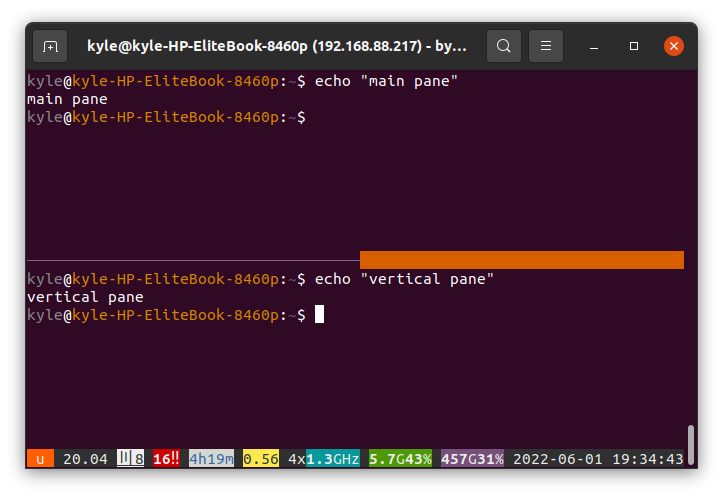 2. To create a Horizontal Pane

For a horizontal division, press CTRL+F2.

To resize the current pane, either change its width or height, use SHIFT+ALT+LEFT/DOWN/RIGHT/UP to resize it.

The UP and DOWN work for a vertical split. The RIGHT and LEFT work for a horizontal pane.

To move up or down your panes, press SHIFT+RIGHT/LEFT/UP/DOWN.

5. Split a Pane into a New Window

If you want to split a pane to a new window instead of the current one, press ALT+F11.

Byobu is a great choice when dealing with various tasks and you want to save their sessions. Besides, you can enable and disable Byobu anytime. We’ve discussed how and when you should use Byobu, and the examples presented help set the pace you need to understand Byobu.