In Minecraft, players can choose from several different weapon options that can either be a close range or a long-range weapon. Both the bow and the crossbow are useful weapons to have that are considered ong-range weapons. These weapons can help players to fight creatures from a distance, allowing them to avoid taking melee damage. When killing monsters in Minecraft, having a bow or crossbow is handy.

While fighting different mobs during a raid, you can climb to a high vantage point that will give you the advantage to kill them from a distance as most of the mobs belong to the ground. Both weapons are super useful when it comes to survival or killing mobs but there are some .differences in them that will be discussed in this article so that you can decide on a weapon that is suitable for you. 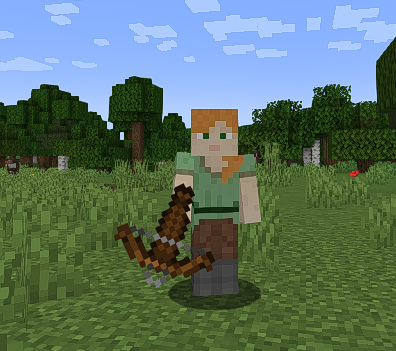 Comparison between Bow and Crossbow

Some of the differences between these two weapons are discussed below:

Time also plays a crucial role when it comes to fighting different mobs and saving yourself. This is where bows take the lead as their reloading time is 1.1 seconds whereas crossbows take 1.25 seconds. Although the difference isn’t significant, the additional 0.15 seconds might save the gamer a heart.

The range is also useful since you don’t have to get close to the mobs to kill them, especially if there are several, therefore crossbows have more range that can cover 100 meters whereas bows can cover 50 meters.

Durability decides the toughness and longevity of the weapon which is 465 for crossbows and 385 for bows.

How to Craft a Bow in Minecraft

For crafting a bow, you need three sticks and three strings and place them in the order shown below on a crafting table:

How to Craft a Crossbow in Minecraft

For crafting a crossbow, you need one tripwire hook, three sticks, two strings, and one iron ingot and then you need to place those items in a specific order in the crafting table to get the crossbow as shown below:

Enchantments are another feature accessible for both weapons, but they are distinct for each, making both unique, and you can select any of them based on your preferences.

In Minecraft, bows, and crossbows both are considered long-range weapons that can assist players in combating enemies from afar, allowing them to avoid suffering melee damage. In this article, we’ve gone over some of the distinctions between these two weapons to help you determine which weapon is best for you.