One of the most enjoyable ways to play a video game is by playing it with a VR headset. VR, or virtual reality, immerses you in a virtual world. Virtual reality has completely changed the way we play games. This gaming mode lets you feel that you are in the game, which is a wonderful experience.

Due to the realistic immersive experience that it provides, this technology can be used for practical applications, as well. VR is being used in military, medical, education, aerospace, and other important industries. Experiencing a flight simulation is one of the key steps in a pilot training session. Whether you do it for fun or pure professional purposes, enjoying a flight simulator in VR is quite an impressive and educational experience.

This article provides a list of some of the best flight simulators available to enjoy with your VR headset.

There are many flight simulators available on the market. Some are purely for entertainment purposes, and others give you more authenticity. Simulators for entertainment purposes have simple controls and easy-to-grasp gameplay, but for more realistic experiences, things change a bit. In a more realistic flight simulator experience, an entire cockpit is created that displays the data you read and buttons you press during flight. It is up to you to decide whether to play for amusement or if you want to go with a more realistic experience.

A decent headset and controllers are required for a worthwhile simulation experience. There are three big names that dominate the VR market: Oculus, HTC, and PlayStation. HTC and Oculus both have tethered and standalone headsets for PC, while the PlayStation VR headset is for PlayStation 4 only. The depth and realism that this simulator provides are so impressive that no other game can provide the same experience.

To fully enjoy the immersive experience of flight simulation, it is recommended to use HOTAS instead of motion controllers. A HOTAS, or Hands-on Throttle and Stick, is an aircraft controller that comes with all the critical switches, throttle, and stick needed for the user to control the plane and provide a realistic aircraft simulation experience. 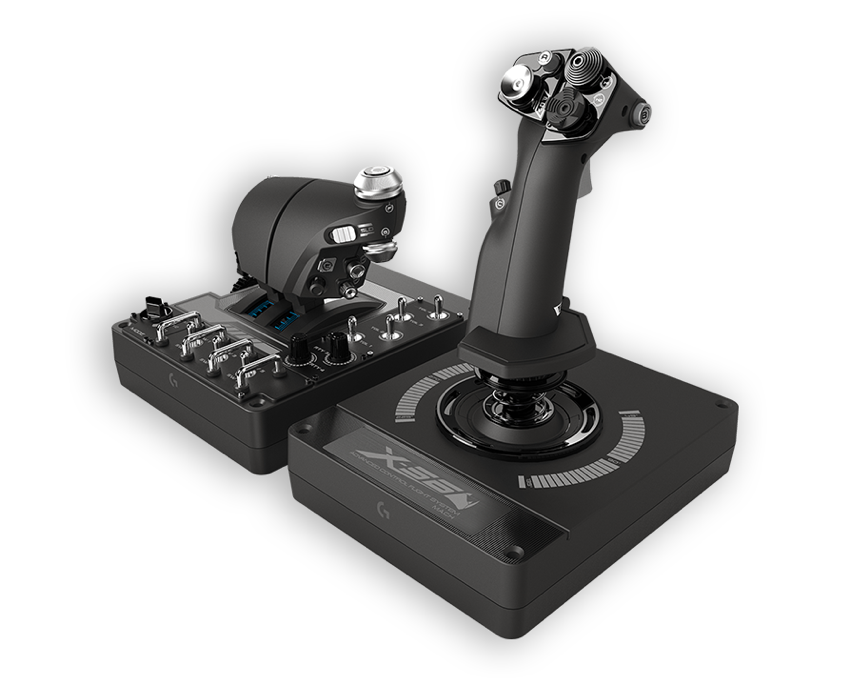 This simulator is easy to learn, and anybody can learn how to play it. If you are a beginner, then you can choose to use semi-automated or fully automated controls; but if you are a pilot license holder, then nothing can stop you from going with the full manual control.

The base version of the Microsoft Flight Simulator comes with 20 planes and 30 beautifully modeled airports. This game can be bought for Xbox One and Windows PC. 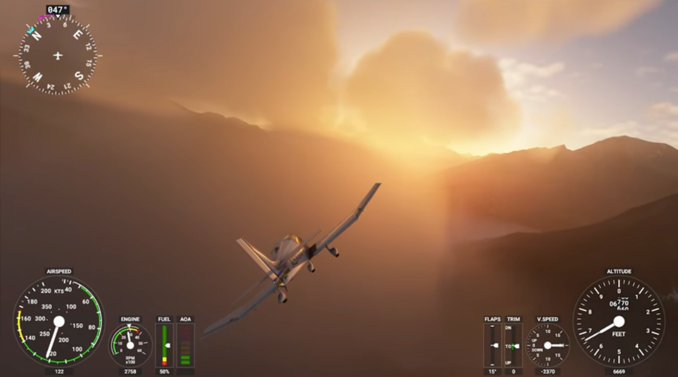 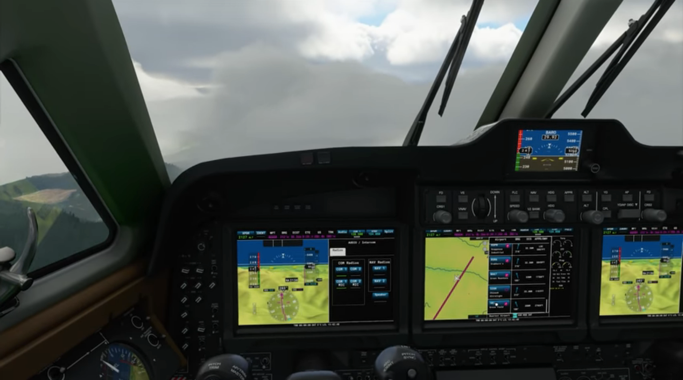 DCS World, or Digital Combat Simulator World, is an exceptional flight simulation game created to offer relaxed activity suitable for the specific experience level of every player. The best part of DCS is that it can be downloaded and played without investing money. There is plenty of paid content that can be downloaded for this game; however, this content is completely optional. This flight simulator is worth trying because it is free to play. There are two types of airplanes in the game, with a free version of a WWII-era trainer and a modern attack jet. This flight simulator was released for virtual reality in 2015. Both the Vive and Rift headsets are supported by DCS World.

Entering the cockpit for the very first time is a great feeling. This game provides a very interesting quality of VR to make the player user feel as if they are in another world, which is impossible when gaming on flat screens. DCS World even allows you to leave the cockpit to move around in the airplane. This flight simulator has an easy tutorial to train beginners, who can learn the complicated controls in the cockpit much more easily. DCS World is also more user-friendly than X-Plane 11. 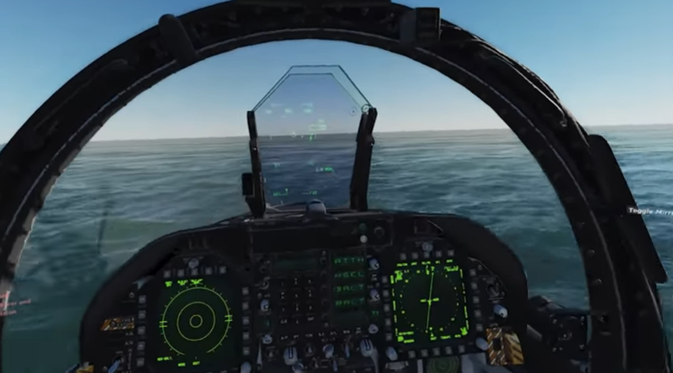 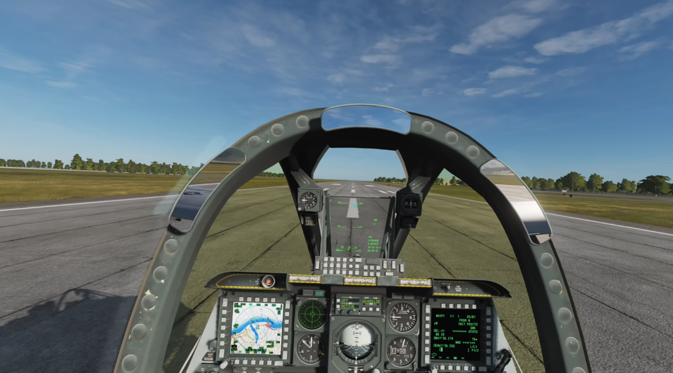 The cockpit design is very realistic. Pressing buttons, turning knobs, and reading data are quite easy tasks with a headset.

Controlling the plane by using a digital yoke instead of a physical controller takes some time to become acclimated to; nevertheless, the controls can still be learned eventually. X-Plane 11 can be accessed from the Steam store. The greatest shortcoming of X-Plane 11 is that it does not have the mass appeal that more straightforward and simple flight applications have. X-Plane 11 usually costs $60 on Steam, but the price can go as low as $20 if you wait for a deal. 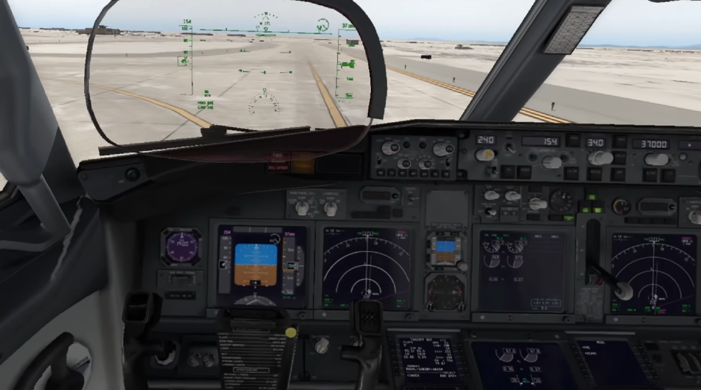 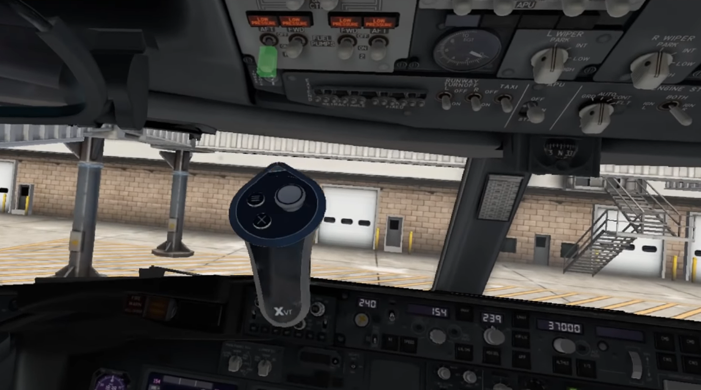 Ace Combat 7 is a wonderful game that can be played on the PlayStation VR platform. This flight simulator will be launched this year, with a finer graphics mode, as well as haptic feedback handheld controllers. This game is appealing for all kinds of game lovers, providing great mechanics and straightforward controls.

This simulator is more of an action game. If you are looking for an energizing, relentless aerial battle, then Ace Combat 7 is the title for you. Luckily, PlayStation games can come extremely inexpensive when some time has passed since the game was first launched. The chances of getting an action flight simulator for under $20 are highly unlikely, otherwise. 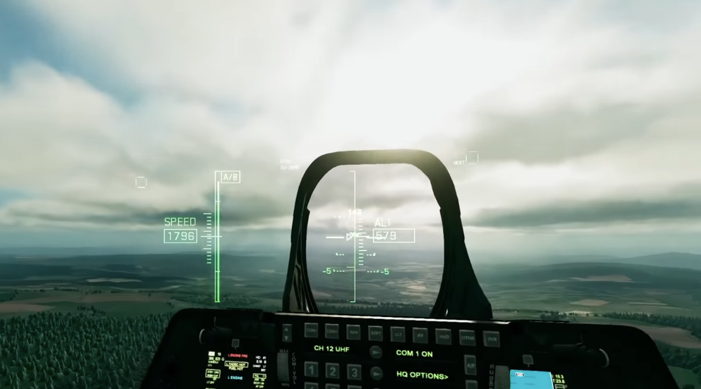 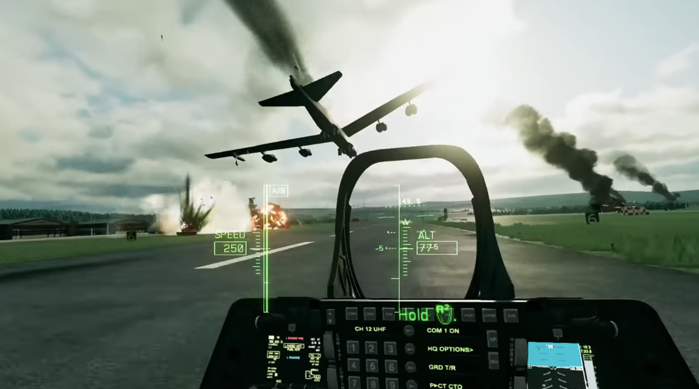 This flight simulator is the simplest option on our list and is the best choice for casual gamers. It is a “cartoon-ified” flight simulator, with a low poly cockpit and environment. Ultrawings has fun gameplay, but more hardcore fans might not be interested in this flight experience. This flight simulator will be great fun for everyone, whether you are an experienced pilot or a beginner gamer. This game is available for the SteamVR and PSVR platforms.

Ultrawings is between a flight simulator and an arcade-like flier, though it is inclined toward the more arcade-like style. Rather than paying for extra airplanes, you need to win them in-game by completing challenges. Most challenges require you to fly planes through rings, firing targets with a gun, or effectively setting down your plane at an assigned spot. In this flight simulator, mechanics are not complex, and flying around the vivid world can be very satisfying. You can fly around different islands and find new air terminals, and each island and air terminal comes with its own unique challenges. 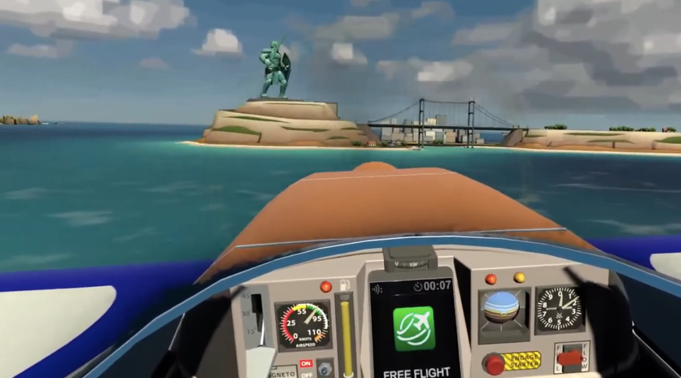 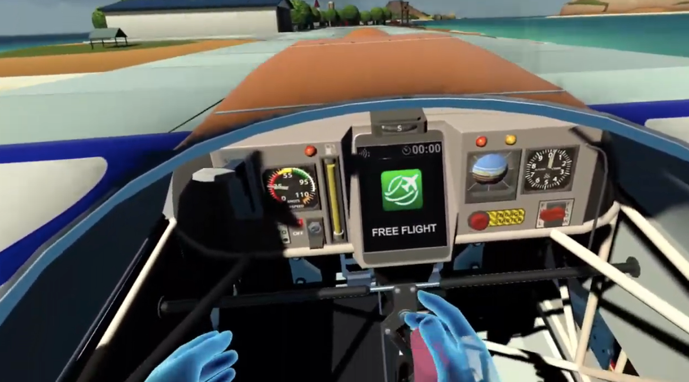 Another enjoyable flight simulator is Aerofly FS 2. This flight simulator was in the public eye even before it was ported to VR. This game comes cheap, too; you can get it for $20 or less. This game includes 20 airplanes, a pleasant presentation of guides and maps, and a digital Interactive Flight School. Inside the cockpit, it is very satisfying to turn on all the switches because there is a tactile response when you press down a knob or turn a lever. Moving a switch in this game is not error-free, however, due to the absence of physical obstructions. However, this is a constraint of VR controls that needs to be controlled. The primary drawback of this game is that it has no dynamic environment. For this reason, the game environment looks less realistic, and everything seems to be flat outside the cockpit. There is no other aircraft, no weather changing, nor any other features that mimic reality in this flight simulator. Furthermore, this game only has a single-player mode. 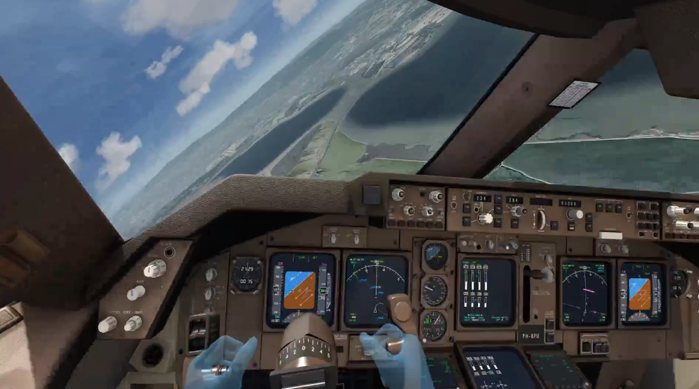 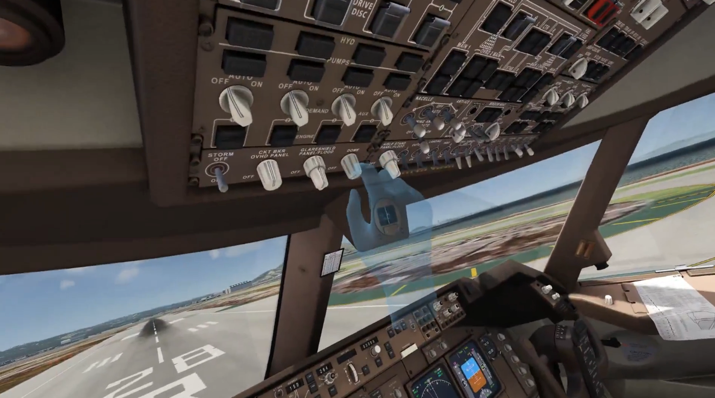 VTOL VR is a futuristic combat flight simulator and is one of the most liked simulators on SteamVR. Visually, it is not the best, but the developers of VTOL VR have proven that you do not always need amazing graphics to enjoy a game. VTOL VR is a well-polished game that comes with three different fighter’s plans, including AV-42C, FA26B, and F45A. The cockpit is extremely interactive and simple to use, and it takes very little time to learn and understand this game, unlike other flight simulators. The game gives you a number of missions with various objectives, but they are not story-driven. The objectives are mainly to hit ground targets and fight in dogfights. You can even design your own missions with custom objectives. 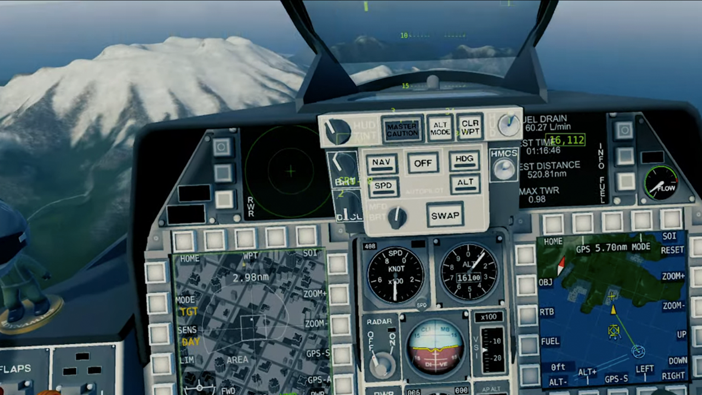 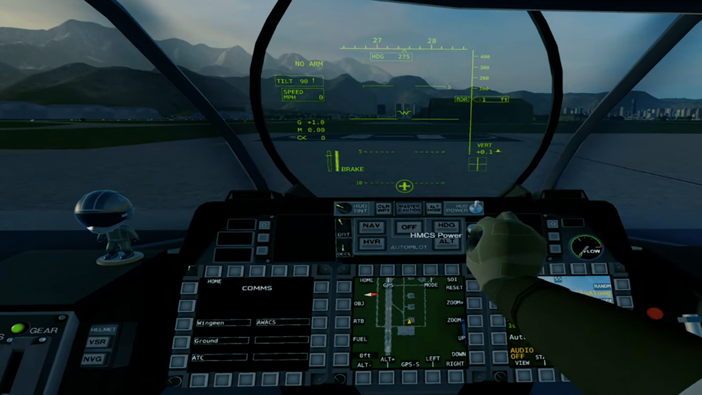 War Thunder is one of the few simulators that are both multi-platform and include native support for Linux. This game is an online multiplayer game based on ground, air, and naval battles.

The air combat in War Thunder is more of an arcade-style shooting game with full VR support. The detailed graphics and high-resolution textures of this game make its appearance visually stunning. Like other flight simulators, War Thunder also has a steep learning curve. The interior of the aircraft is detailed, and the mechanics are well refined.

As a whole, War Thunder is a fun and super addictive game. You might find yourself spending hundreds of hours playing this game. One thing that players might not like about War Thunder is the in-game purchase feature, and some aircraft that require purchase are very costly. 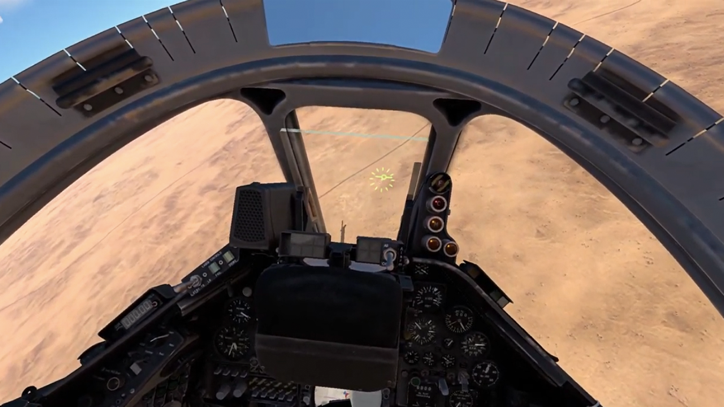 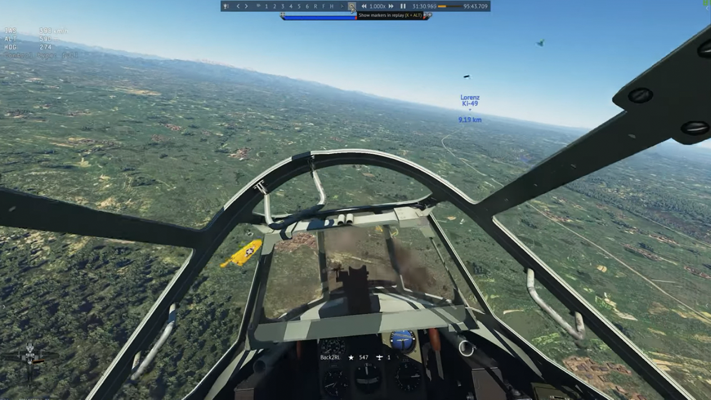 One of the most unique and interesting approaches to VR technology is flight simulation. Playing flight simulators with VR technology gives an astonishing experience that cannot be achieved through playing games on television or computer screens. Several flight schools have already adopted VR technology for training purposes because flight simulators can act as realistic training instruments. VR games are on the ascent, and we do not anticipate that developers will disregard flight sims at any point soon.