“The reason many people use Linux is the application programming, system administration and other command line tasks. When it comes to command line tasks, Terminal Emulator is the heart of the Linux system. It is one of the most used tools by Linux users. There are many user-friendly graphical distros like Software Centre and Integrated Development Environments available for Linux, but many users prefer the terminal to perform tasks quickly and efficiently.

The terminal is the default emulator in most of the Linux distros, and it is used for various tasks like programming, system administration, network monitoring, etc. But it has some limitations which you might have faced while performing various tasks.

Most Linux distributions ship with default terminal emulators such as xterm, but these are not good enough for many of us who are continuously engaged in programming and other command line tasks. So today, in this article, we are going to have an in-depth look at the 7 best Terminal alternatives which you can use on Ubuntu.”

Tilda is a terminal emulator which is more or less similar to popular terminal emulators such as Gnome Shell, Konsole and xterm, etc. But it has some features you will not find in any other normal terminal emulator. Tilda is not a full window terminal emulator; instead, it can be pulled down and up from the top of the desktop screen using the special key on the keyboard; generally, it is the F1 key. 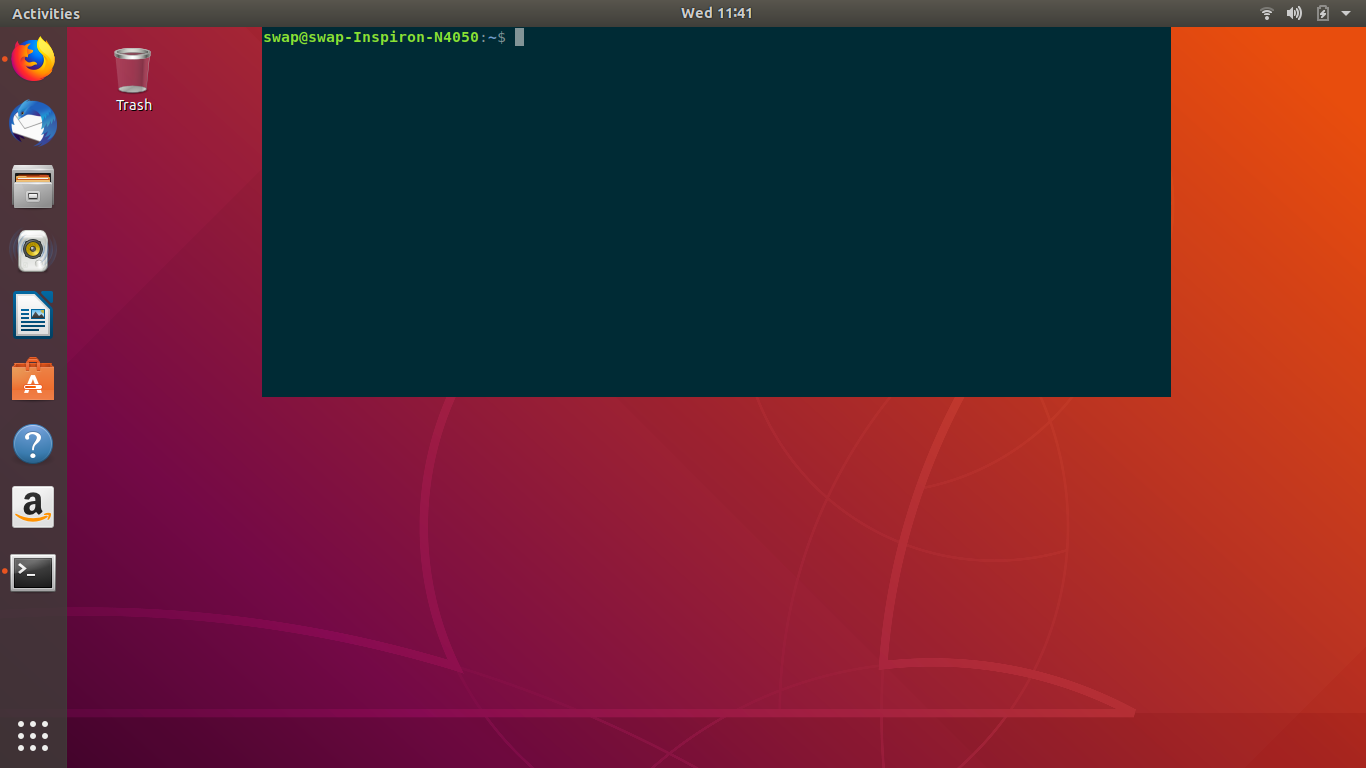 Apart from this feature, Tilda is a highly configurable terminal emulator; as you can notice in the below screenshot that there are many options to configure tilda, you can customize its appearance, background and text colors, window size, scrolling preferences etc. Also, you can customize keybindings according to your needs. 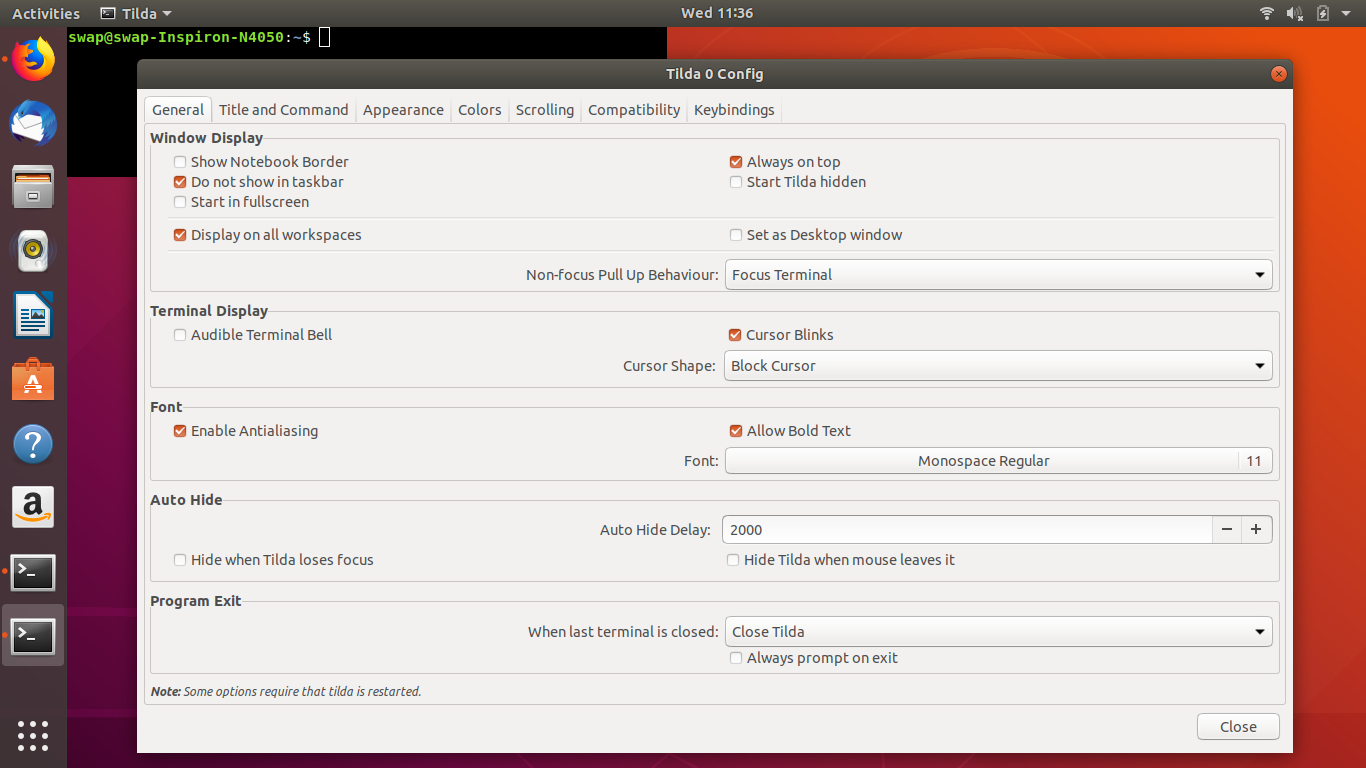 During testing, Tilda worked flawlessly, which is a pro and other positives are tabs support, works on minimal dependencies, and one feature I really enjoyed is its transparent nature which lets you see information from the application running under the Tilda window. But there are some annoying bugs that came to my notice during testing, like you need to close the Tilda window completely before shutting down your system and some minor glitches that don’t make much difference in the overall performance of this emulator.

Guake is another drop-down terminal emulator on our list; it is written in python and developed for Gnome Desktop Environment. Basically, Guake is inspired by the First Person Shooter video game Quake; it adopts the behavior of Quake’s console, dropping down from the top of the desktop screen by hitting keyboard key F12. 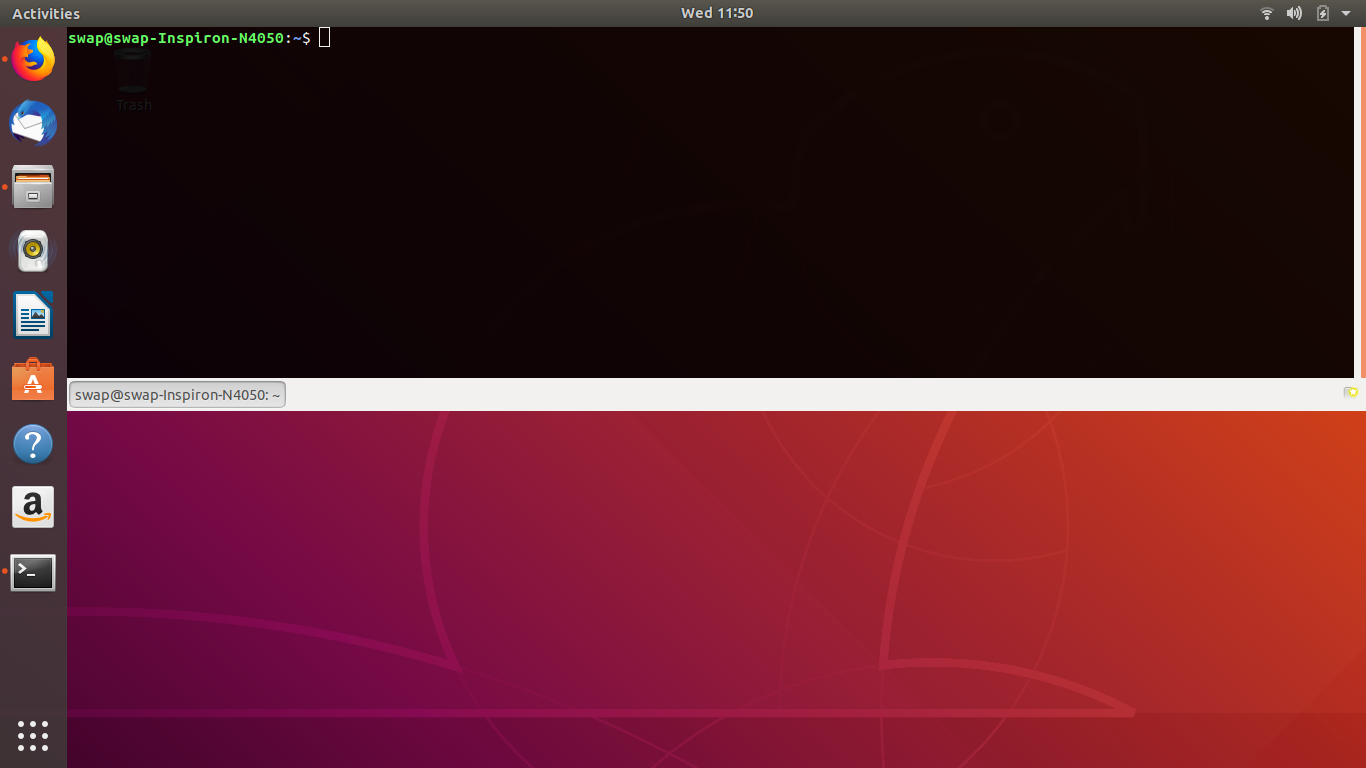 Guake is also a highly configurable terminal emulator; as you can see in the below screenshot, you can customize its color palette, appearance, keyboard shortcuts, and scrolling pattern, and you can also tweak the shell and quickly open it. 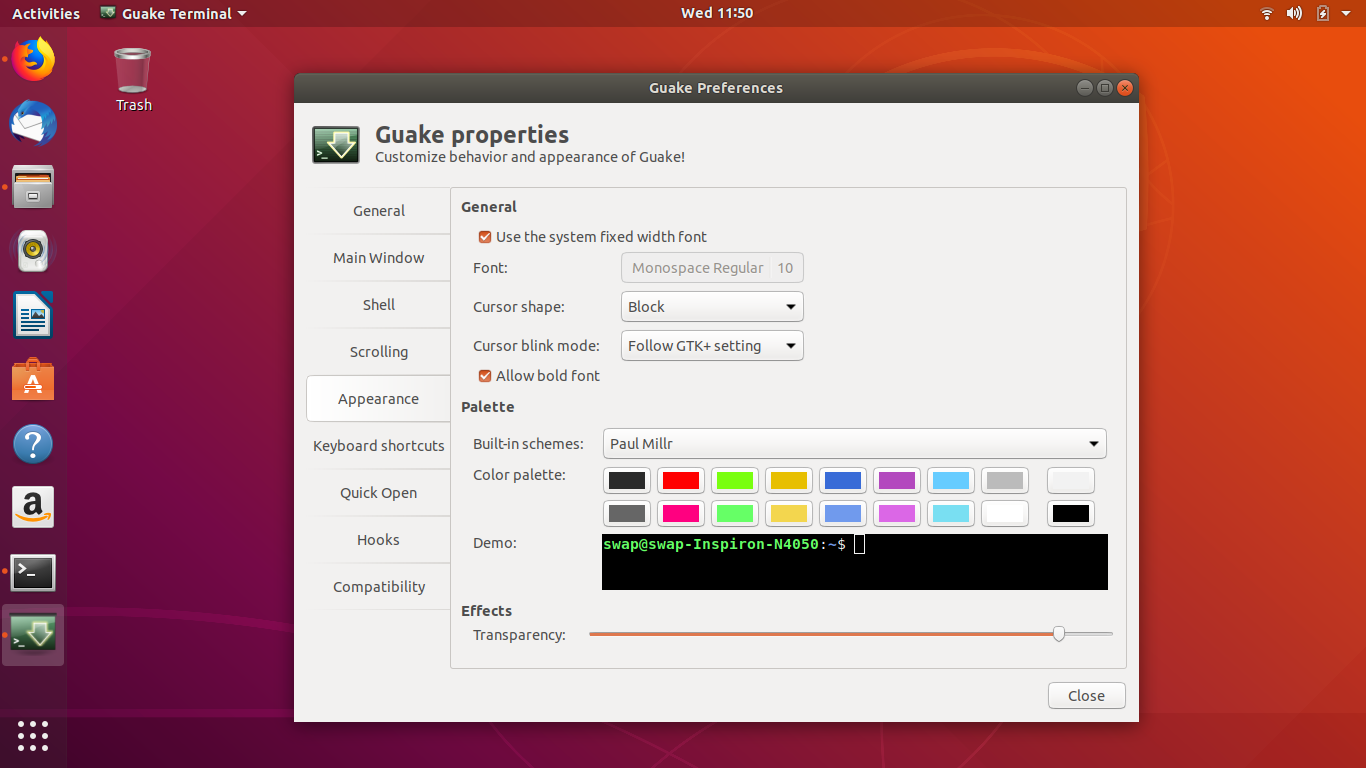 Testing of this terminal was smooth, and I have found some pros as follows, fast and lightweight, support for multiple tabs, highly configurable, and most importantly, it is a very user-friendly emulator despite being lightweight and running on minimal resources. But there are some cons that might persuade you guys to choose another emulator; first of all, it is not a cross-platform terminal emulator, and occasionally it becomes unresponsive and slows down a bit even if you have powerful hardware.

Remember those days when we used to work on those really big old-school cathode ray tube monitors? That was some fun, wasn’t it? With the next terminal emulator on our list, which is Cool Retro Term, I am going to take you back to the good old days of command line work. This emulator will give you a look and feel of working on cathode ray monitors with bloom-around characters. 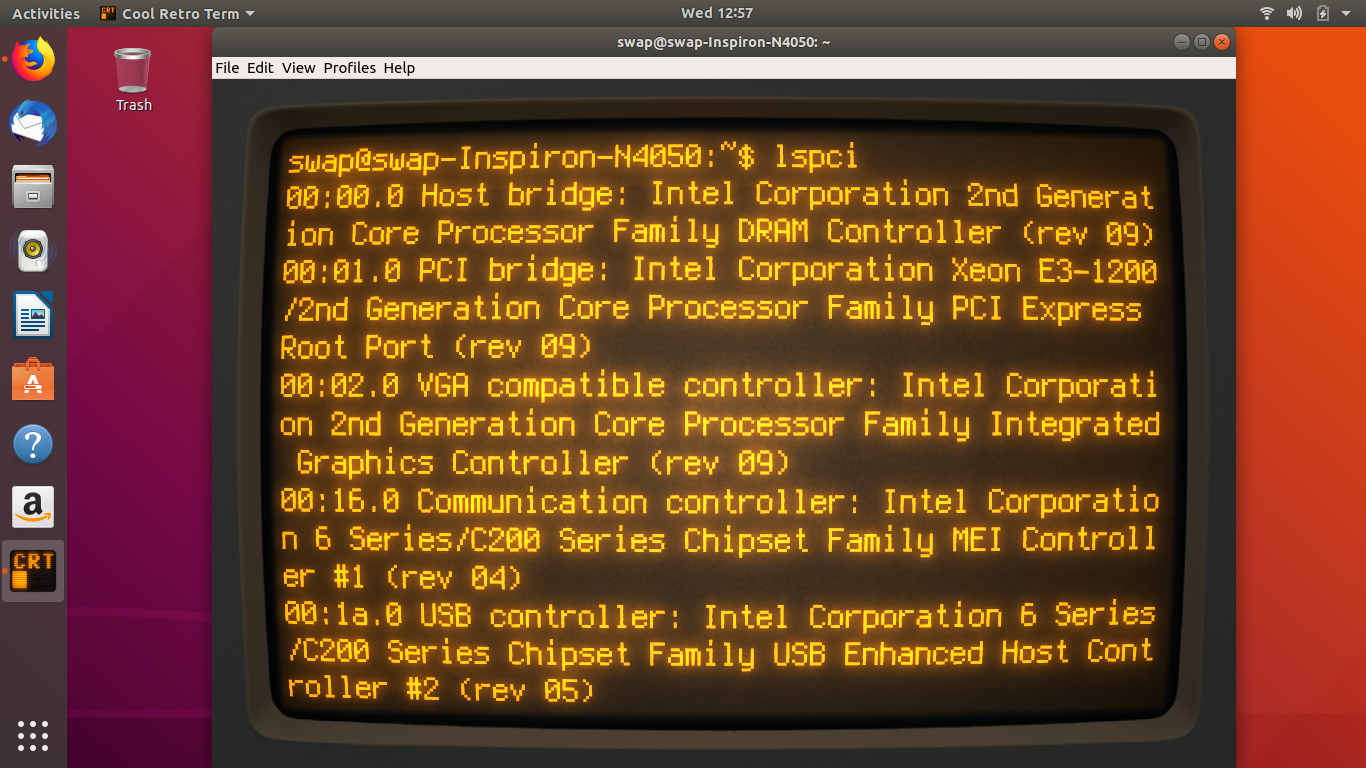 If your system hardware is powerful enough to handle some decent graphics requirements of this terminal emulator, then this one is definitely for you. Certainly, you will enjoy the nostalgic feeling you get while working around with Cool Term Retro.

While testing this emulator, I realized that it’s always not a good idea to have more special effects and transitions than needed. The same is applicable to Cool Retro Term, but the good thing is you can disable all these features in this emulator, then it works flawlessly and could prove to be a decent alternative to the default Terminal emulator in Ubuntu.

Despite having some unique features in it, Cool Retro Term has some its cons, like it demands very powerful resources to run smoothly, and as it is heavily dependent on KDE libraries for its majority of special effects, running this emulator on other systems will require you to download a large number of KDE libraries.

Terminology is a terminal emulator based on Enlightenment Foundation Libraries (EFL), developed for UNIX, BSD, Linux and other platforms. If you have ever used an xterm emulator, then you will find Terminology almost similar to it in many aspects. 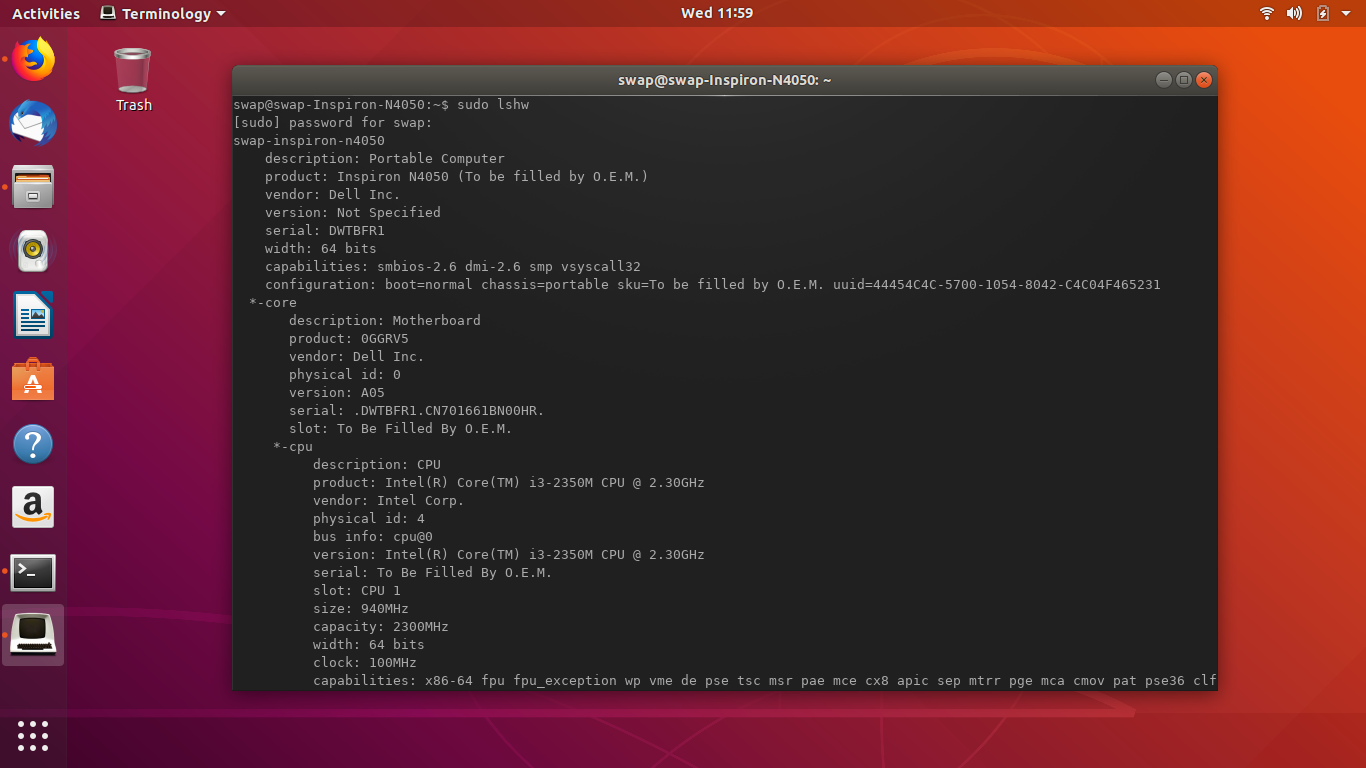 Default Terminal emulator in Ubuntu has some limitations, like you cannot open URLs, files, videos or images directly in its window; instead, you have to be dependent on other graphical applications to view them. But using Terminology, you can preview all these things in its window itself. Apart from that is a highly customizable Terminal emulator with features like splits which splits the window into two panes. 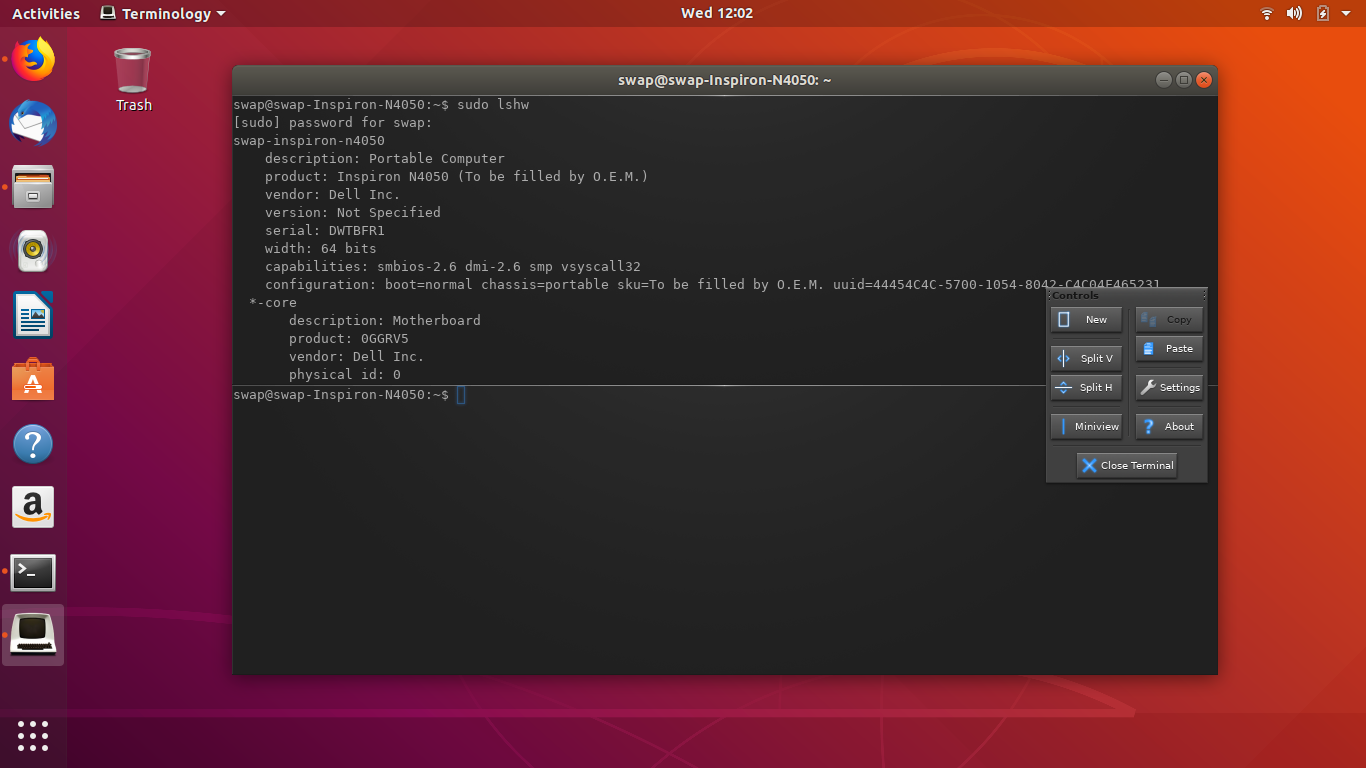 Some of the pros of Terminology are you can put an image in the background or set a color scheme for a pane in split mode; font size adjusts itself according to the size of the window. But what it really lacks is a scrollbar and support for a wide range of modern colors; configuration is also complicated sometimes, which is a notable con for this emulator.

Terminator is an open-source and cross-platform terminal emulator developed in Java. Based on the Gnome Terminal, Terminator adopts most of its features and gets updated as soon as Gnome Terminal gets updated. If you’re a programmer or a system administrator and work on multiple tasks at the same time, then Terminator can be the most useful emulator for you as it helps you split your multiple tasks into individual panes under a single window. 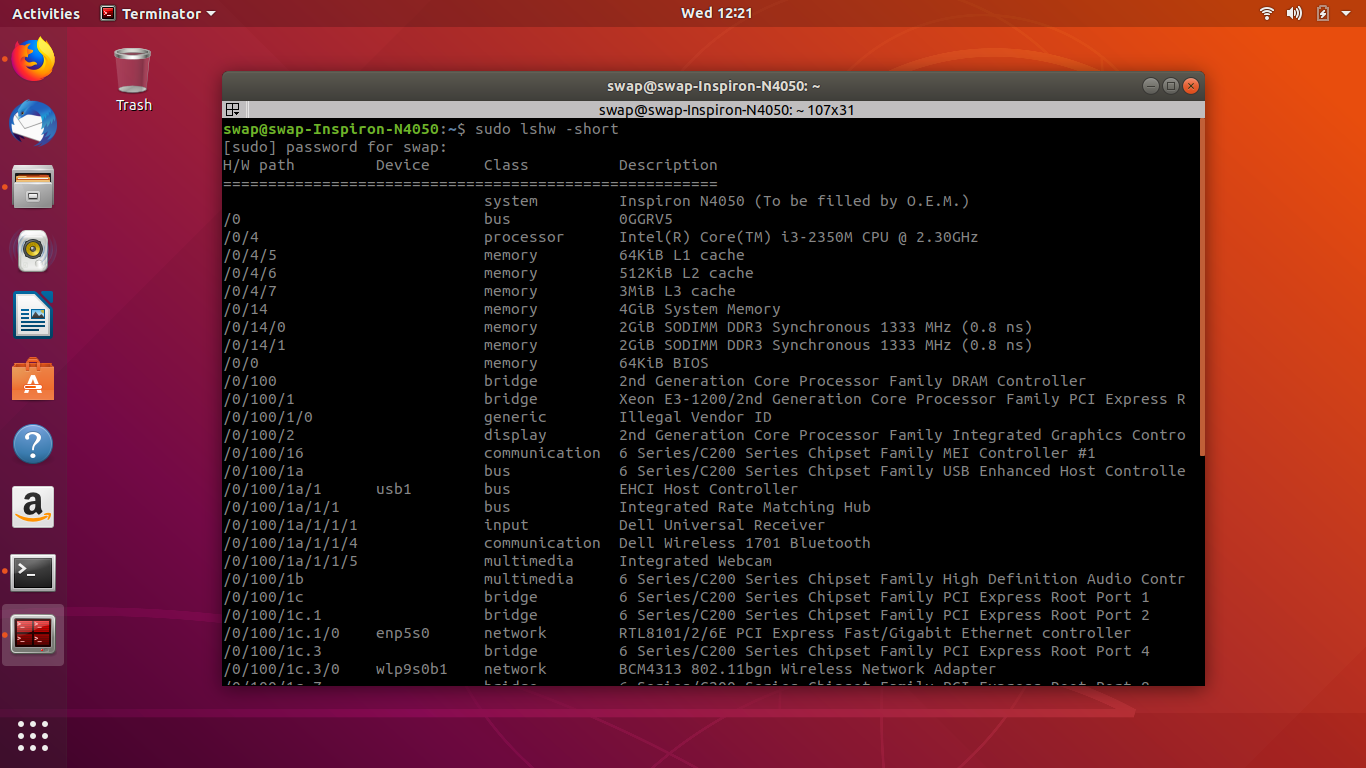 Terminator is a slightly heavyweight emulator which might require you to have some decent hardware. But it offers some really good features like split window mode for working on multiple panes at a time, full customization support, automatic logging, drag and drop and many more.

If you have an older system and have minimal hardware resources, then you might face some difficulty in running this emulator; its text search feature is also not up to the mark sometimes. These are some of the issues I have faced during testing.

Sakura is a simple yet powerful terminal emulator based on GTK and libvte. To run this emulator, you don’t need to have a full GNOME desktop installed, as it runs on very few dependencies. It is a decent terminal emulator with not many features on offer, but it can get your work done without any problem. 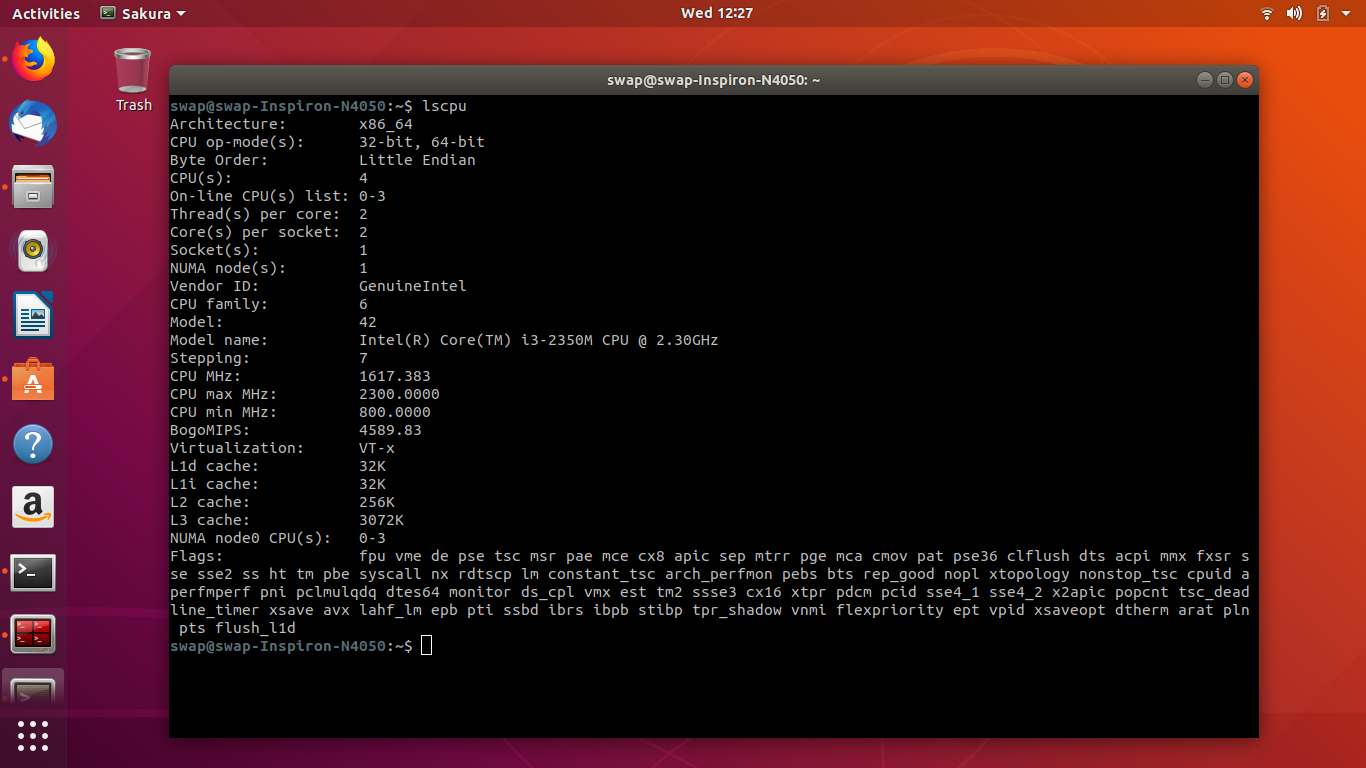 Some of the features and positives I have found during testing are that it starts up very quickly even on machines running on minimal hardware, support for all the modern colors, and multiple tab support. One thing I noticed is that there are not many configuration options available for users in Sakura Terminal Emulator.

Yakuake aka “yet another kuake” is another drop-down terminal emulator on our list. It is very similar to Konsole as far as the front end and some features are concerned. When you press the F12 key on the keyboard, it automatically slides downward from the top of the desktop screen, and on hitting the same key, it slides back to the top. 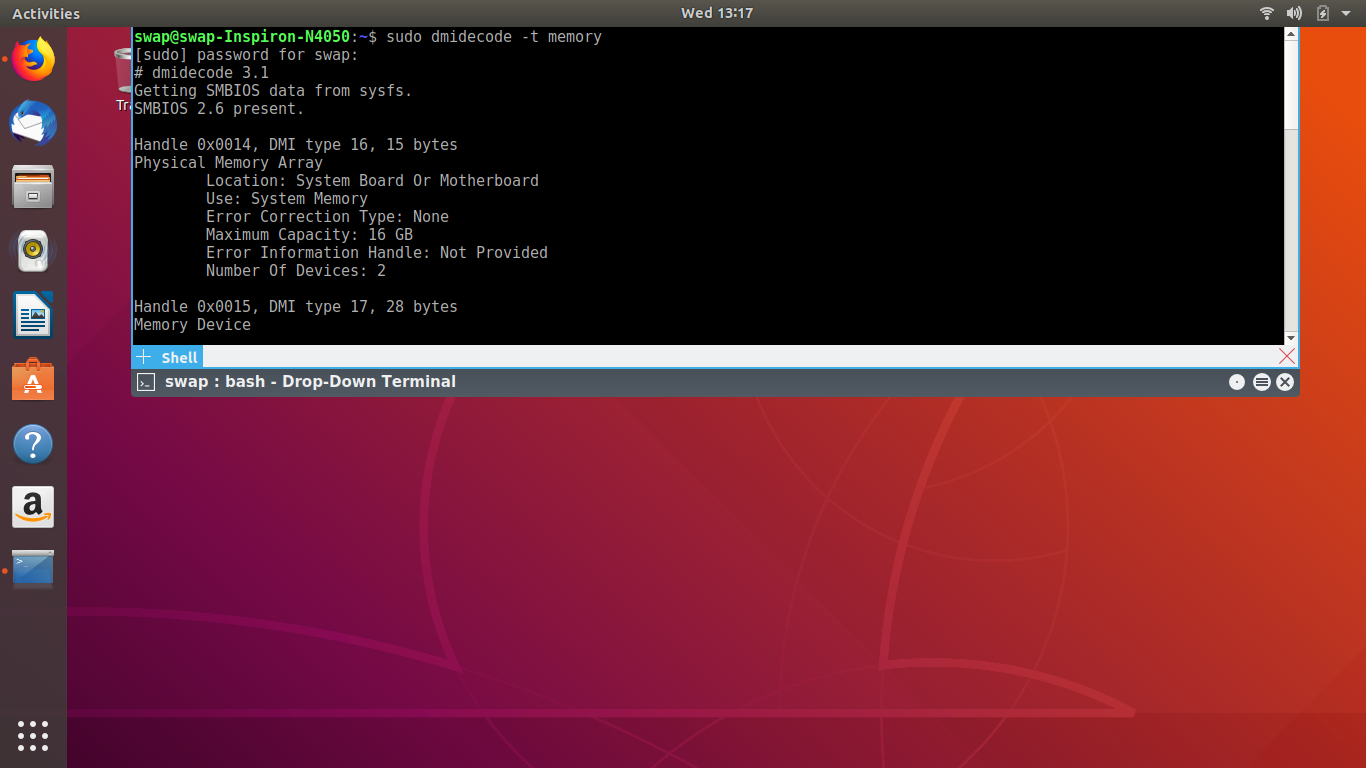 Some of the cons in Yakuake, for me, are its over-dependence on KDE libraries, and sometimes it slows down a bit after continuous usage. 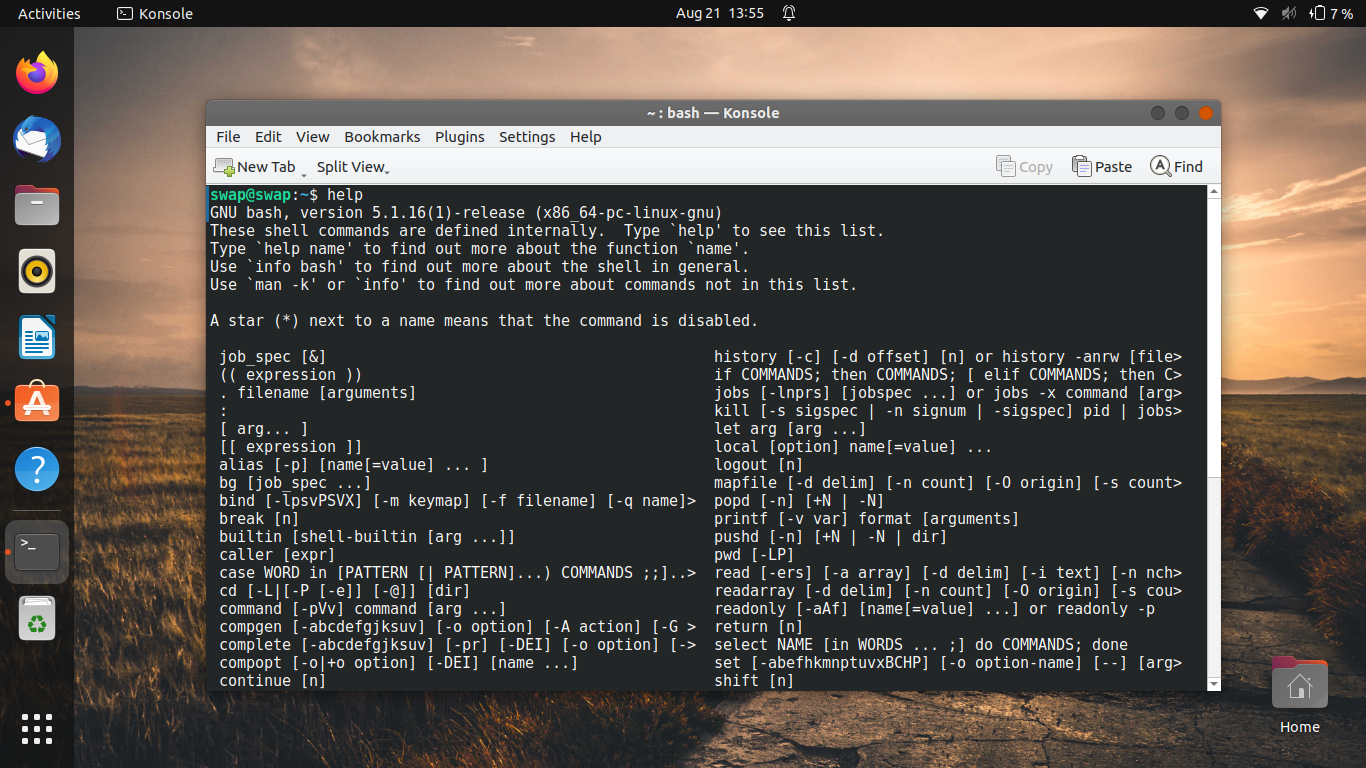 Using detachable tabs, the user can interact with multiple sessions from a single window of the konsole emulator.

Deepin terminal is a simple yet powerful terminal emulator with a simple user interface. It also supports Quake mode, which lets you browse the web while writing code and inputting commands. 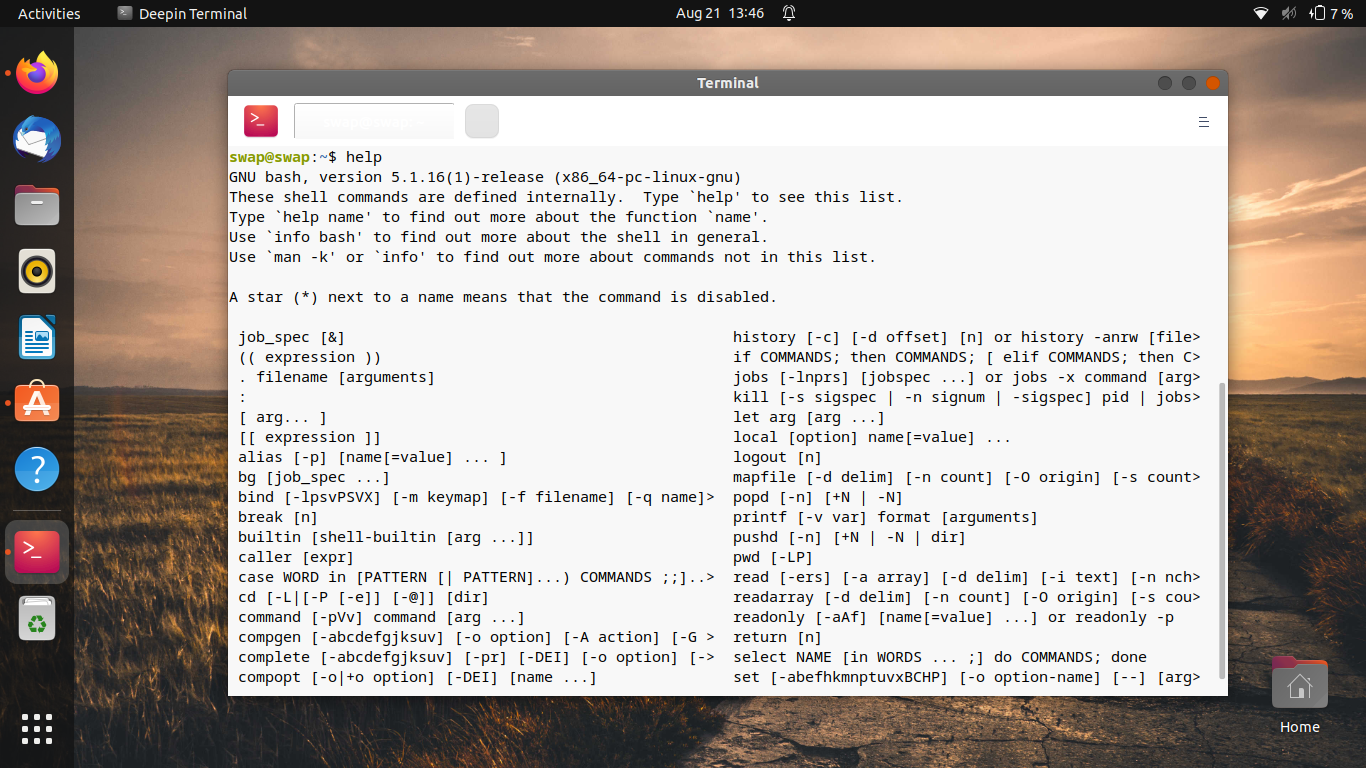 Like the browser, you can also add multiple tabs to create more workspace. So, it could prove to be a great alternative to the terminal on Ubuntu. Deepin terminal emulator is available for download and installation through Ubuntu Software Center.

Alacritty is a free and open-source terminal which simple and reliable. It is a modern terminal emulator with a beautiful user interface. 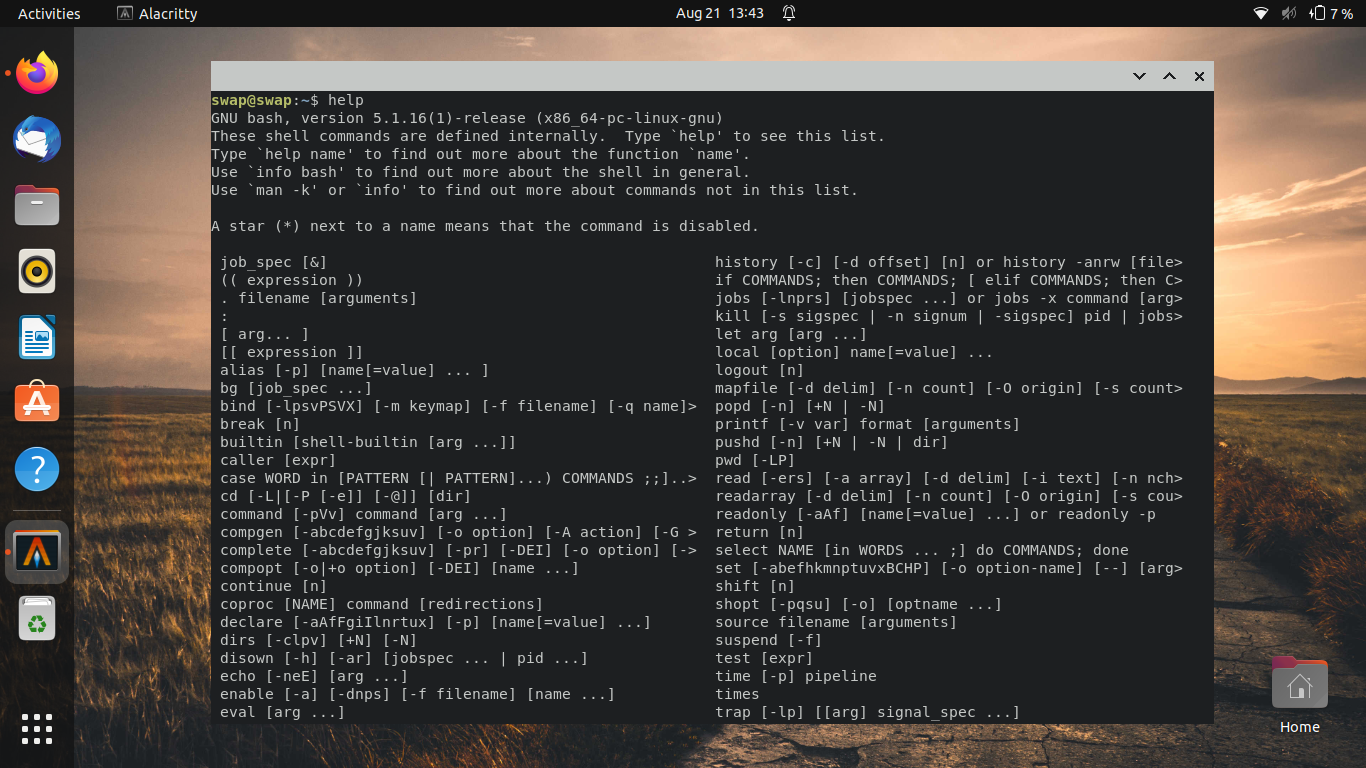 So, these are the 7 best alternatives for Terminal in Ubuntu. The Terminal emulators listed here are tested on Ubuntu 22.04 LTS and could work easily on older releases depending on the hardware resource you have.