I know how it feels to be a software or a web developer. It is a great fun. Doesn’t matter if you are a professional web developer or a newbie, in web development you always find something new to learn with new advancements in web technologies every now and then. Thanks to the boom in number of internet users, some new and unique businesses are being set up to offer products and services right on the customers computer screen.

The IDEs listed here can be useful for both professional as well as new developers as these IDEs come with some unique features that makes programming task somewhat easy and quick.

PhpStorm is a closed-source cross-platform Integrated Development Environment especially designed for coding in PHP, HTML and JavaScript. Built on JetBrains’ IntelliJ IDEA platform, PhpStorm is one of the most modern and cutting edge IDEs available for web development on Ubuntu. PhpStorm ships in with all the features of WebStorm with full-fledged support for PHP and Databases/SQl. We will know more about WebStorm later in this article. 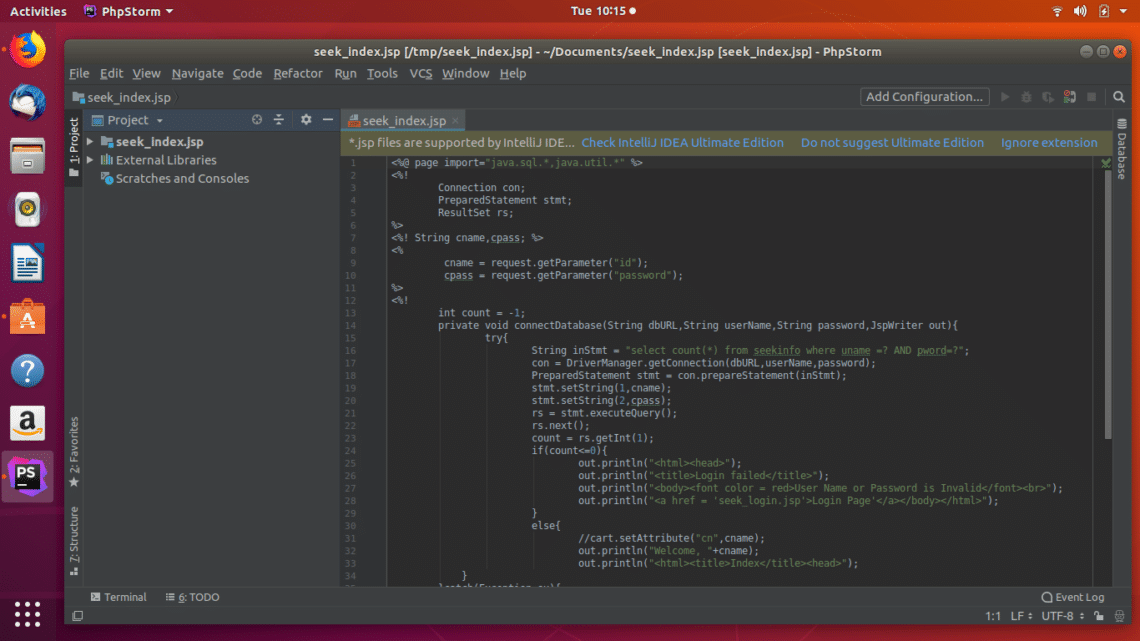 PhpStorm has very attractive and slick user interface as its front-end is designed with latest cutting edge technologies, such as HTML5, CSS, Saas, CoffeeScript, etc. You can customize this IDE with support for themes and extensions to enhance its features. It provides one of the best coding environments to web developers with features like automatic code completion, error highlighting, support for major frameworks such as WordPress, Joomla!, Yii, Symfony, etc. 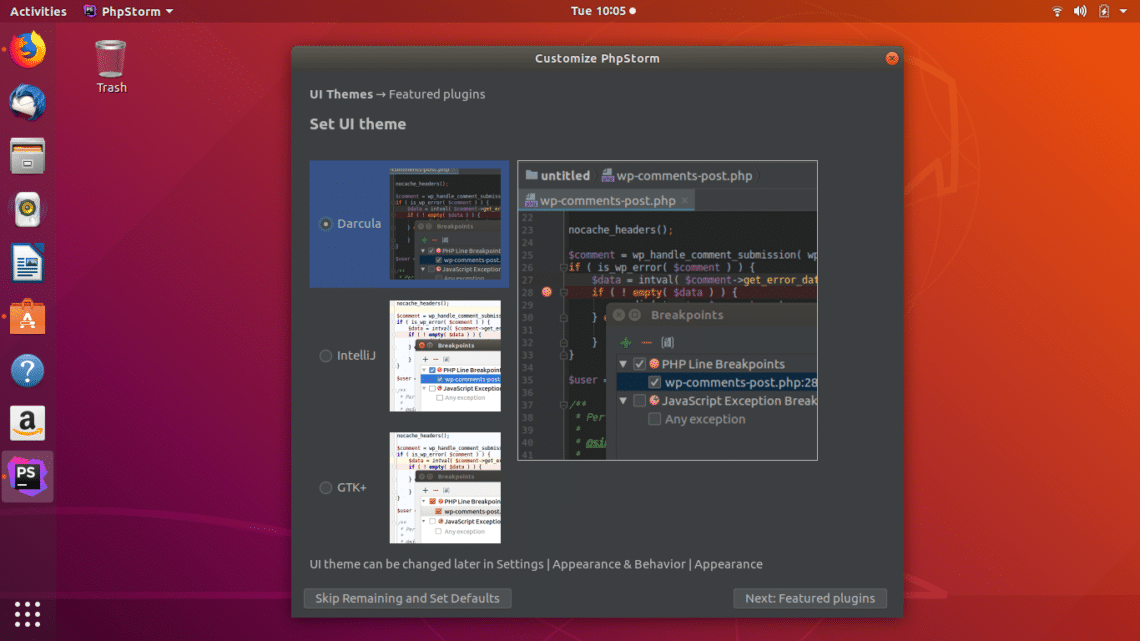 PhpStorm is available as snap package on Ubuntu 16.04 or higher and cab downloaded and installed by running following command in Terminal.

Developed by Microsoft for Windows, Linux and macOS, Visual Studio Code is a code editing IDE which you will find very much similar to Atom Text Editor and Sublime Text. Visual Studio Code could be very useful for those who are new in programming as it can be used as an excellent learning tool which explains you everything right from the simple HTML tag to syntax and error handling in programming. 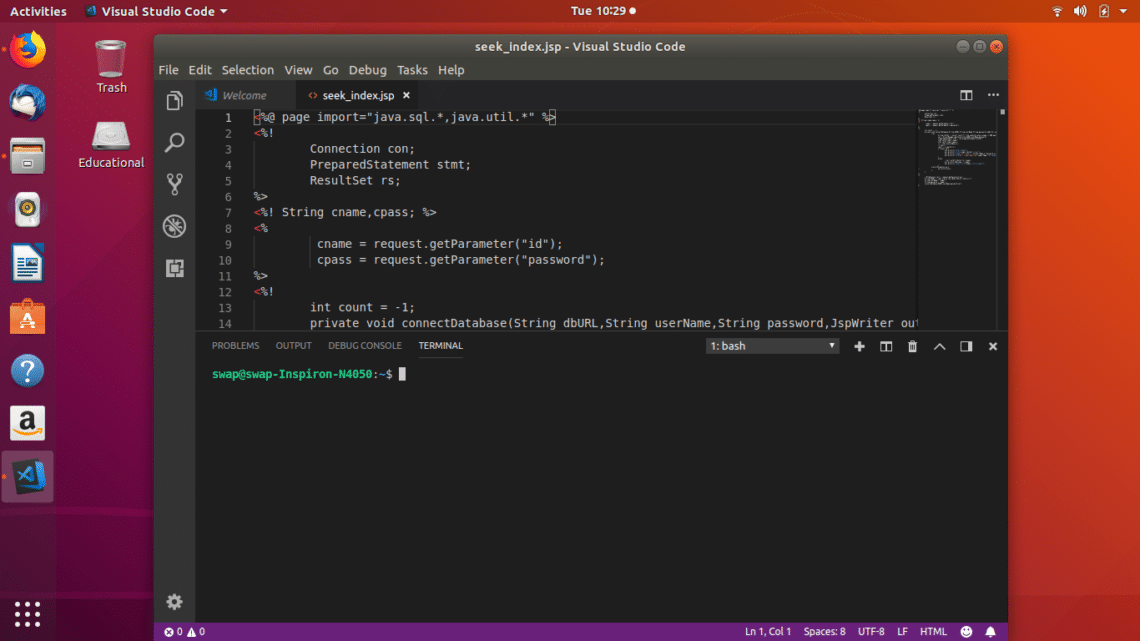 This IDE ships in with Git integration out of the box and offers features such as auto code completion, syntax highlighting, refactoring, snippets, keyboard shortcuts and support for various programming and scripting languages out of the box such as C, C++, CoffeeScript, CSS, HTML, JSON, F#, Perl, PHP, Ruby, Swift and many more.

Visual Studio Code IDE is fully customizable as you can change themes, install additional extensions to add new programming languages, debuggers and many other additional services which can be very useful in development. 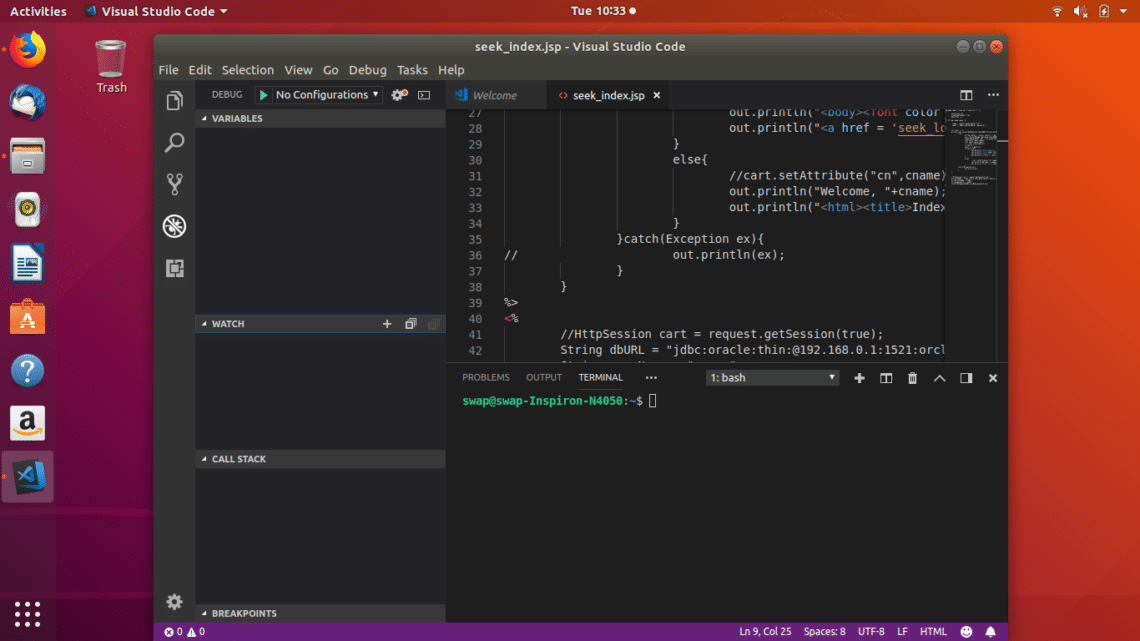 Sublime Text is one of the best cross-platform code editors you will ever find for programming in Ubuntu desktop environment. It is a lightweight code editor which supports coding in various programming and markup languages such as Python, C, HTML, JavaScript, CSS and many other popular languages and technologies used for web development. 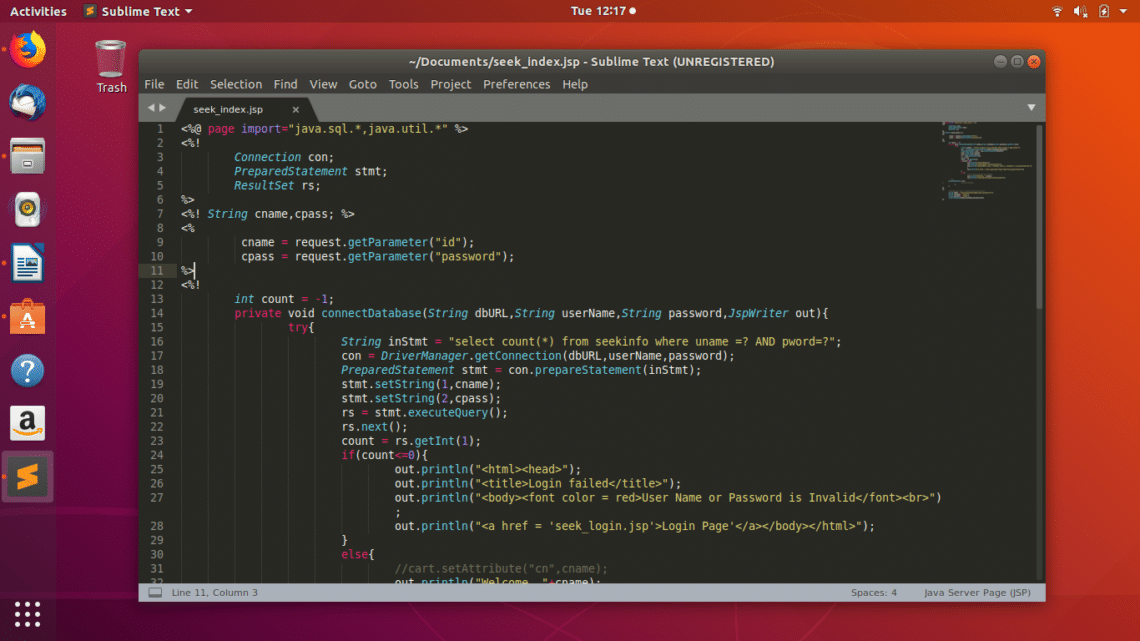 Sublime Text ships in with unique set of features such as

To open files in few clicks and jump to symbols, lines or words.

A popup appears when hovering over a symbol. 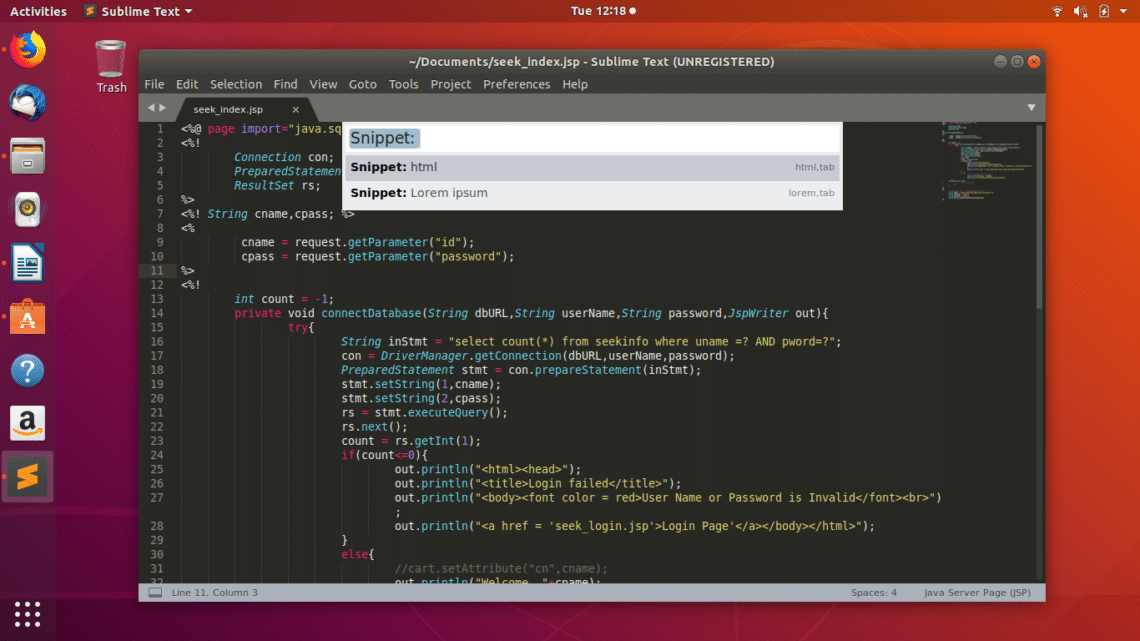 Apart from these features, Sublime Text is a highly customizable IDE with simple JSON files. You can customize key bindings, menus, snippets, and macros separately for different files and projects.

Atom is a free and open-source source code editor developed by GitHub for Windows, macOS and for various Linux distros including Ubuntu. Atom IDE has one the best user interface which is completely customizable with changes in themes and styling. 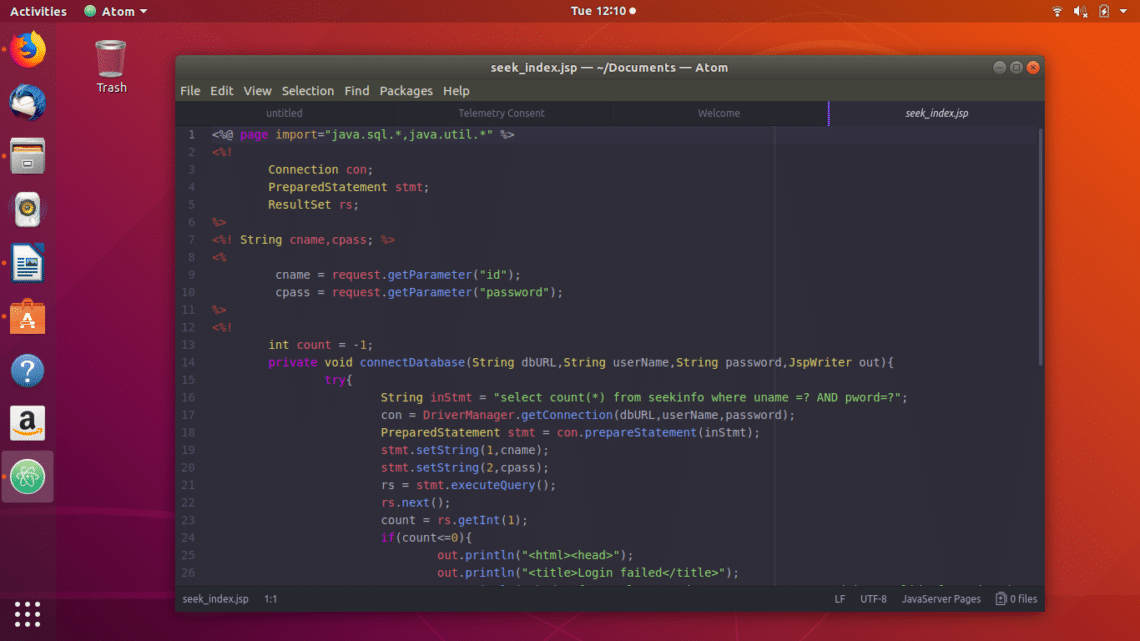 Based on Electron framework, Atom comes with support for various programming languages such as C, C++, C#, CoffeeScript, HTML, JavaScript, PHP, CSS, Python, Perl and many other widely used languages and web technologies.

Developers of Atom claim it be a hackable text editor for the 21st century. It ships in with IDE features as well as Git and GitHub integration.

One of the best features in Atom editor is Teletype

This feature lets you collaborate with other developers right from your editor in order to share and teach knowledge which eventually results in building better software or web application.

Atom also offers some IDE like features such as cross-platform editing, built-in package manager, smart auto completion, find and replace, file system browser and multiple panes. Atom is a fully customizable IDE with thousands of open-source packages available for installation that can be used for feature and functionality enhancements. 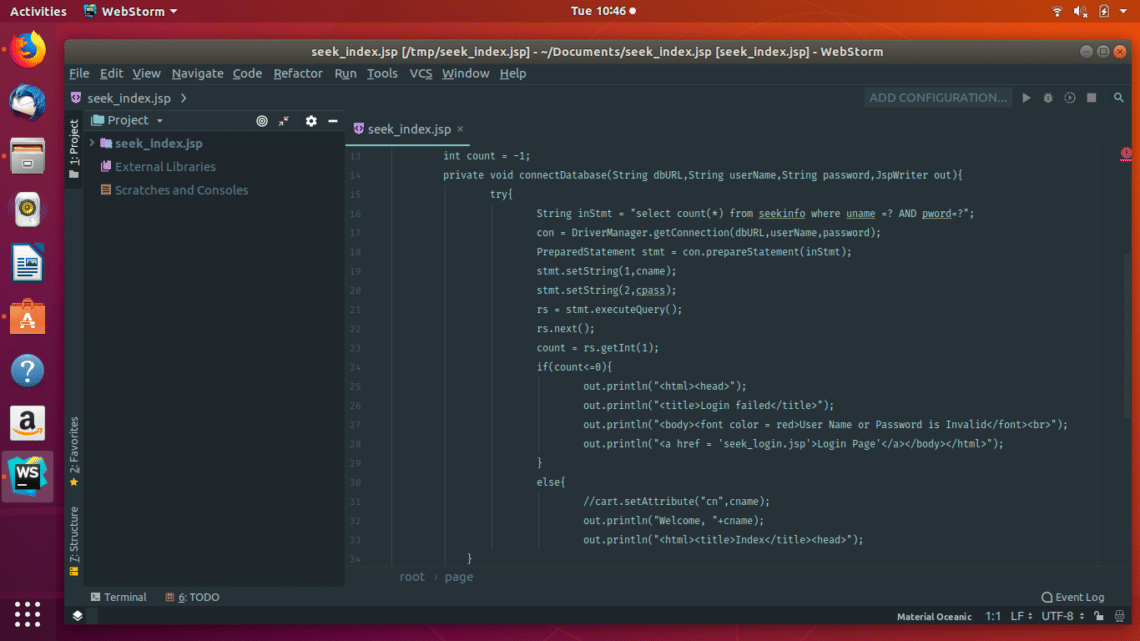 WebStorm has very modern and slick user interface and offers feature like you will find in any modern IDEs such as intelligent code completion, error detection, powerful navigation also refactoring for JavaScript, TypeScript, stylesheet languages. 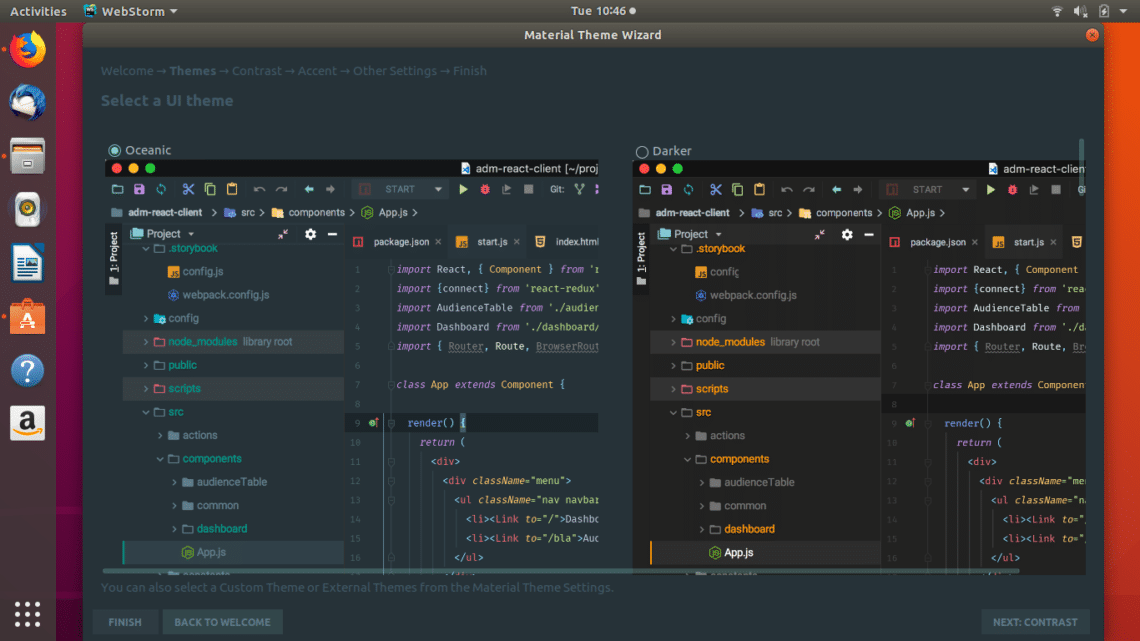 It also comes with debugger that you can use to debug Node.js apps easily from IDE, Unit Testing with Karma, Mocha, Protractor and Jest. Also WebStorm comes integrated with Git, GitHub and Mercurial out of the box.

Brackets is a cross platform web development application developed by Adobe Systems. Brackets has all the features you can expect in any modern IDE and it has excellent user interface which is easy to navigate.  This is the best web development IDE because it offers live HTML, CSS and JavaScript coding and editing functionality which can be very useful during web development. 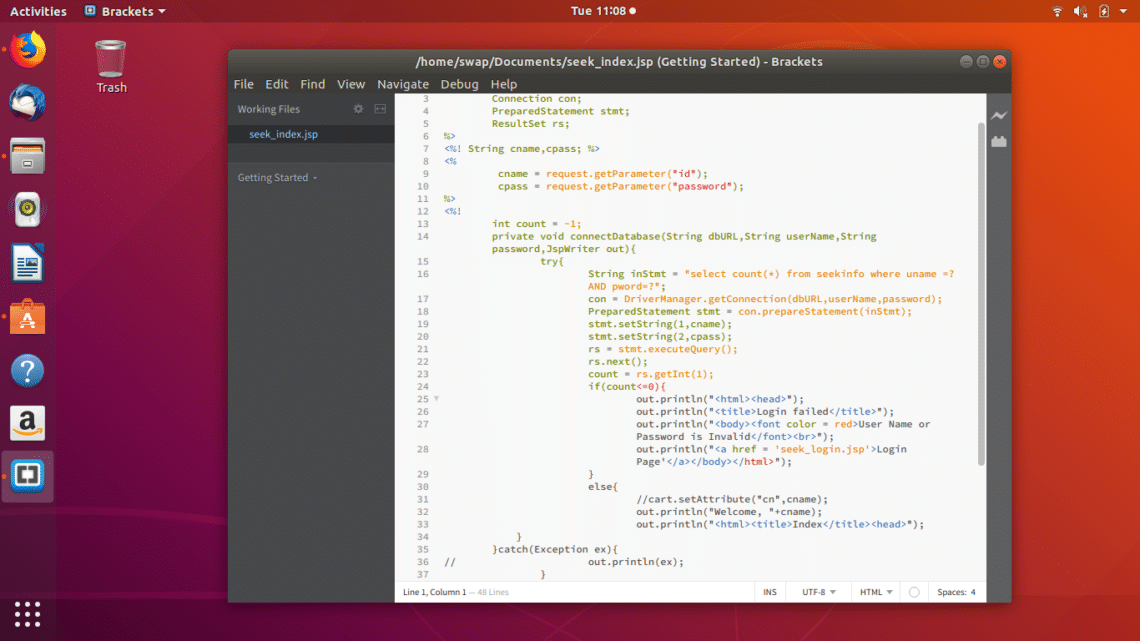 Brackets is a lightweight yet powerful web development IDE which offers features like inline editors, live preview, split view, JSLint and LESS support. It also offers integration with Theseus which is an open-source JavaScript debugger which can be used to set break points, step through code and real-time variable inspection. 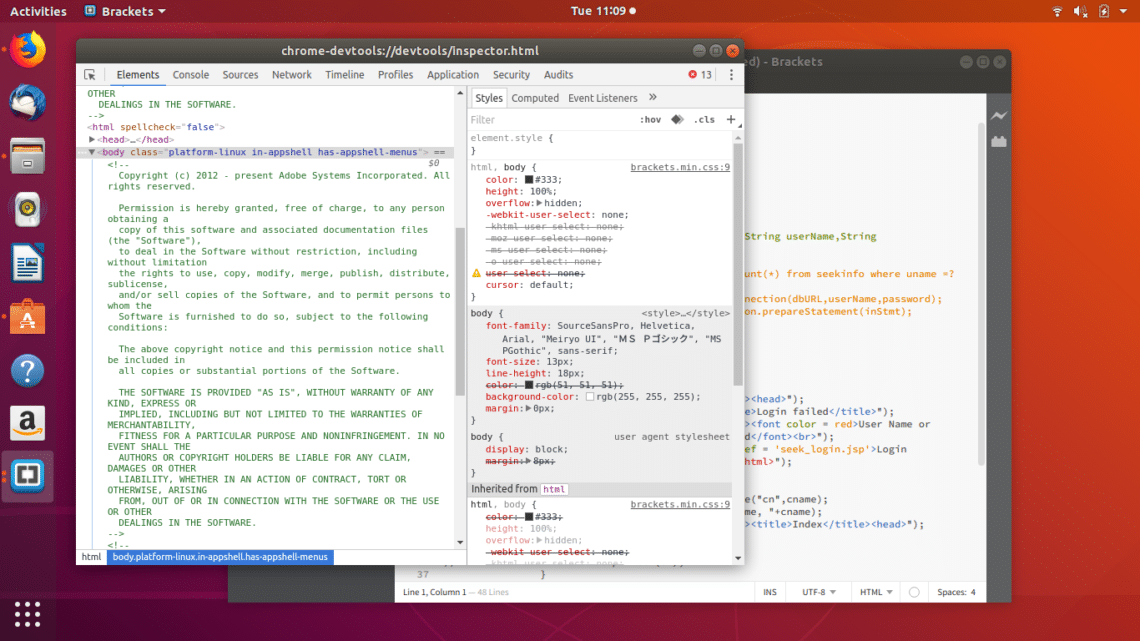 Brackets supports programming and web development in various languages such as Perl, Ruby, HTML, Python, Java, JavaScript and many others. It also ships in with built-in extension manager which can be used to download and install additional extensions in order to enhance functionality.

Vim is one of the best and my favourite IDE for software programming and web application development. Vim is a terminal based code editor which is highly configurable which you will find a bit difficult to use but once you get familiar with it you will hardly use any other IDE. 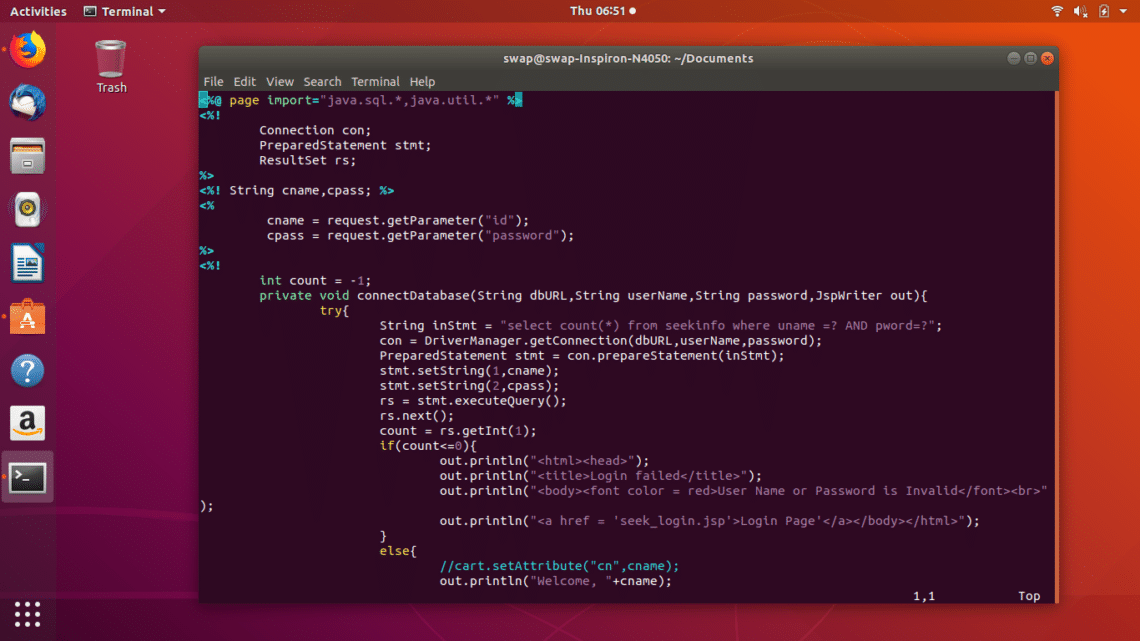 It supports all the major programming and markup languages such as Python, C, C++, C#, Java, HTML, CSS, JavaScript and many more. Vim offers features such as syntax highlighting, mouse gestures, DirectX support for Microsoft users and apart from these, Vim is a highly customizable IDE as it offers wide range of plugins and extensions.

Developed by ActiveState, Komodo is an IDE which is written in C++, C, XUL, Perl, Python, JavaScript and CSS. Komodo is a closed-source and cross-platform IDE and it also has its open-source counterpart named Komodo Edit. 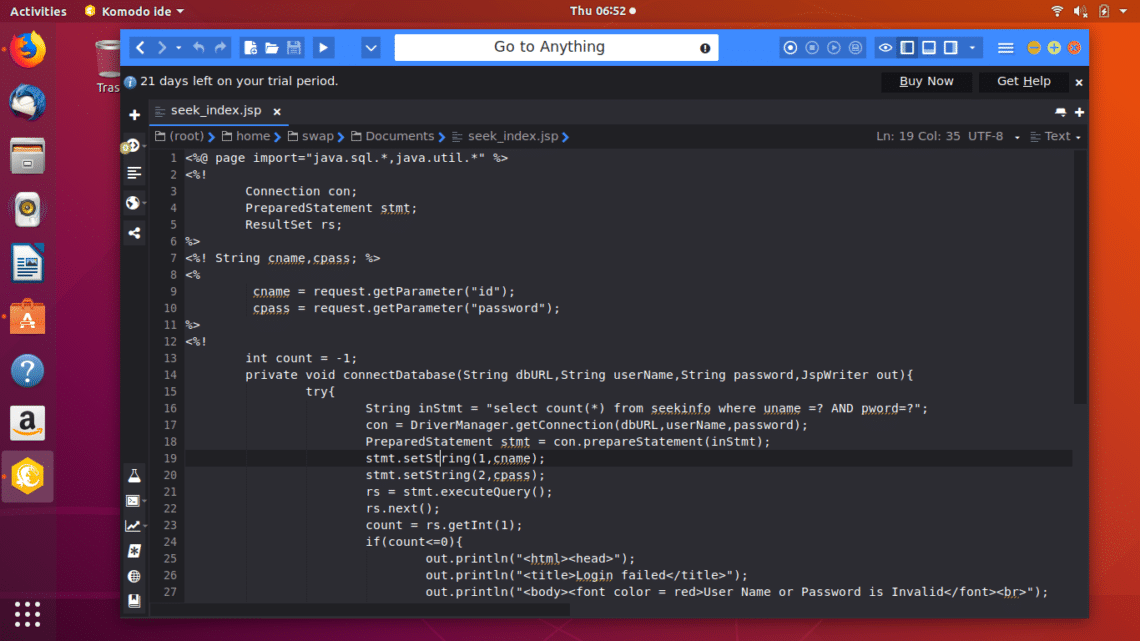 Komodo ships in integrated with Git, Mercurial, Subversion, CVS, Perforce and Bazaar out of the box. It also supports tons of plugins and extensions which you can install for functionality and performance enhancements. 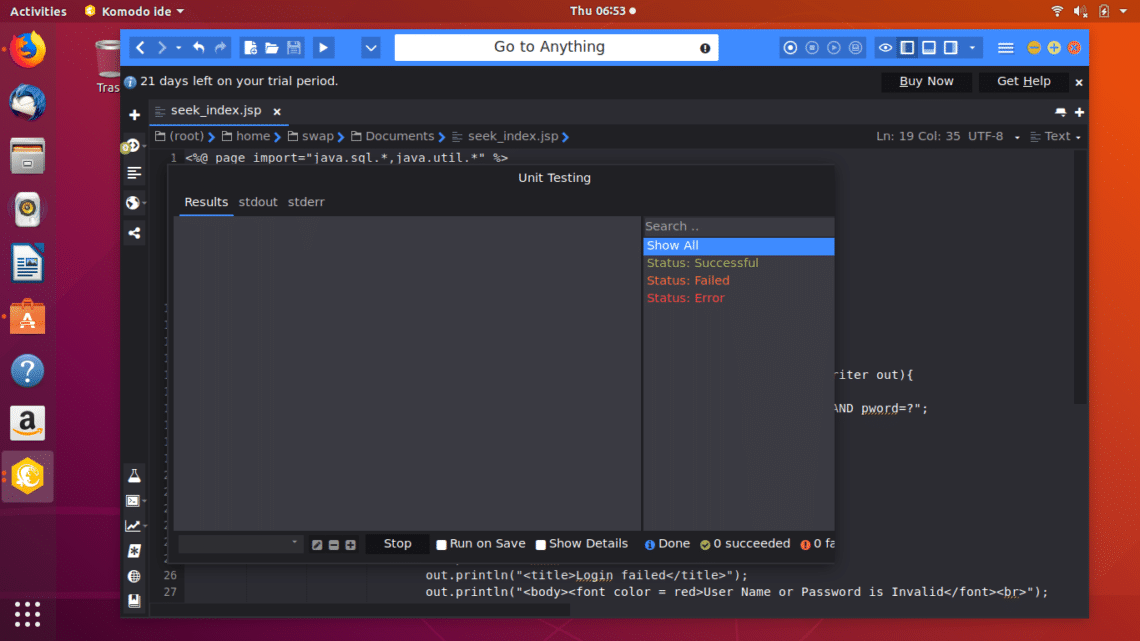 You can download latest release of Komodo IDE from here and install it using Terminal.

GNU Emacs is a lightweight cross-platform code editor developed in Lisp and C. Basically Emacs is specially designed for programming in Python but it supports other software and web development in all the major programming languages and web technologies. 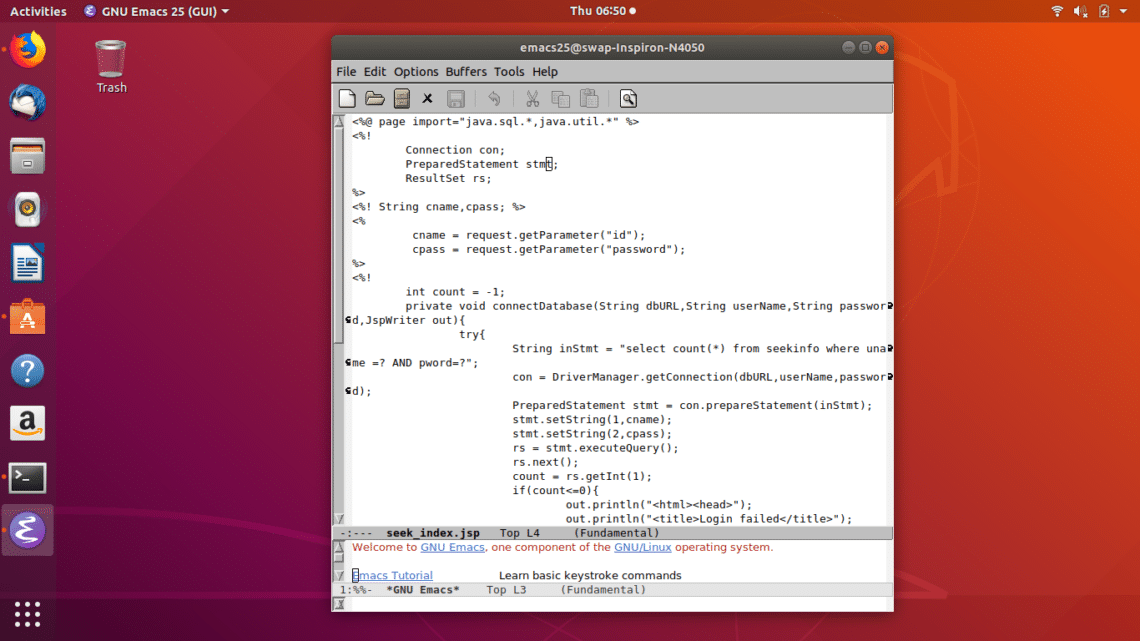 Emacs has simple yet powerful user interface with support for syntax coloring. Despite being a lightweight IDE, Emacs some very useful features such as highly customizable UI, plugins and extensions support, and syntax highlighting.

GNU Emacs can be downloaded and installed from Ubuntu Software Centre.

Bluefish is a cross-platform Integrated Development Environment developed by Bluefish Dev Team. It is available for various operating systems including W 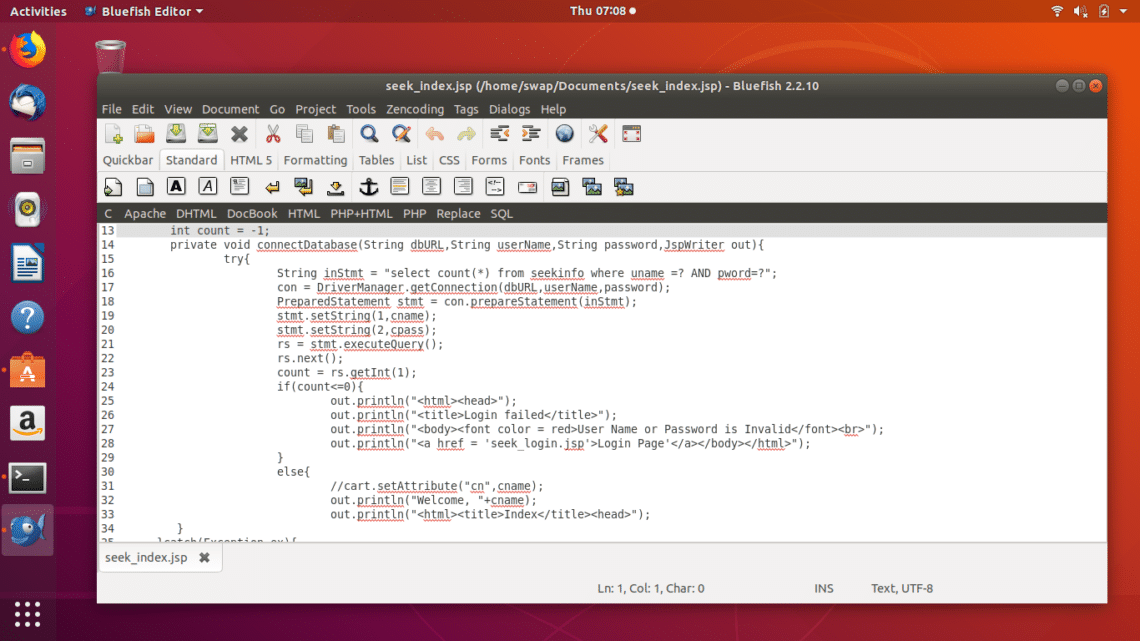 indows, macOS, Solaris and many Linux distros. It is a lightweight code editor with simple user interface which can be very beneficial to new Linux users.

Code::Blocks is free and open-source integrated development environment developed in C, C++ and Fortran. It is cross-platform IDE which can be used in Windows, Solaris and various Linux distros including Ubuntu. 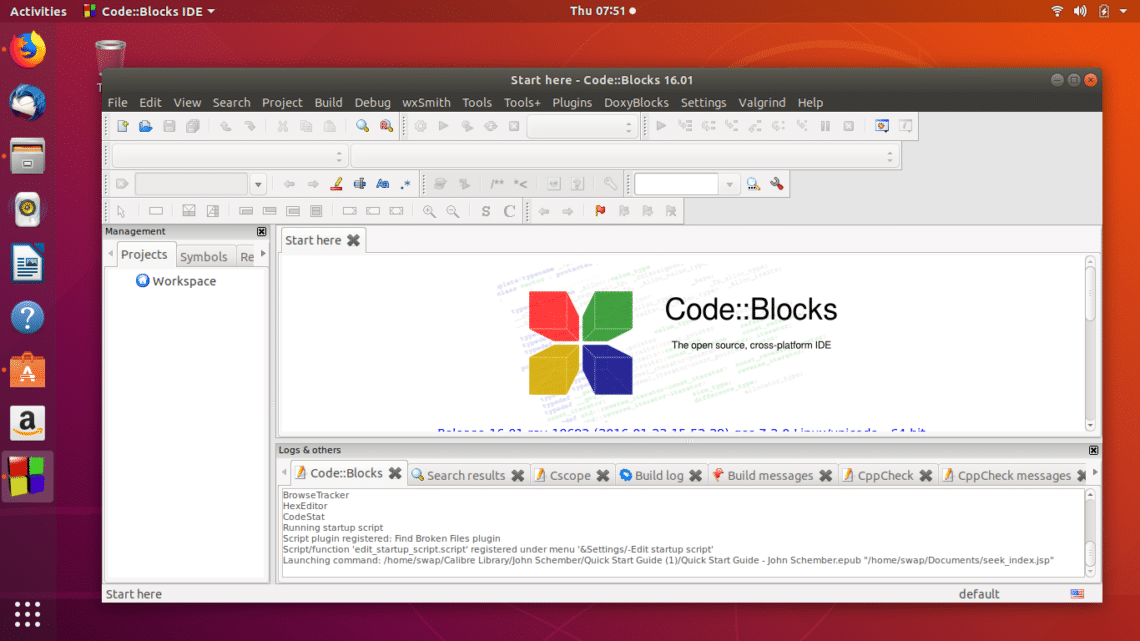 Code::Block supports programming in all the widely used programming languages which includes C, C++, PHP, HTML and JavaScript. It is lightweight yet feature-rich IDE with features on offer such as code refactoring, syntax highlighting, code folding, auto code completion and many more.

Code::Blocks ships in with multiple compilers including GCC, Microsoft Visual C++, Digital Mars and many others. It is also a highly customizable IDE with plugins and extension support. To install Code::Blocks in Ubuntu, run following commands in Terminal one-by-one.

So these are the 11 best IDEs for web development in Ubuntu as of 2018. All the IDEs listed here are tested on Ubuntu 18.04 LTS edition and all of them will run smoothly on older Ubuntu releases too. Have questions or suggestions? Feel free to reach us at @LinuxHint and @SwapTirthakar