Chromebooks tick a lot of boxes: they’re affordable, portable, and have enough processing power for all basic tasks, such as web browsing or document editing. Some even come with high-end hardware components capable of meeting the needs of software developers and other professionals.

Last year, at Google I/O in Mountain View, Google announced its intention to ship all future Chromebooks with Linux support right out of the box, making it possible for users to run just about any popular Linux distribution in a container, in parallel with Chrome OS.

As you can see, Chromebooks have a lot to offer to Linux users—not to mention their ability to run Android apps. To help you spend your money wisely, we’ve compared dozens of popular Chromebooks, and here’s our list of the best Chromebooks for Linux in 2020. 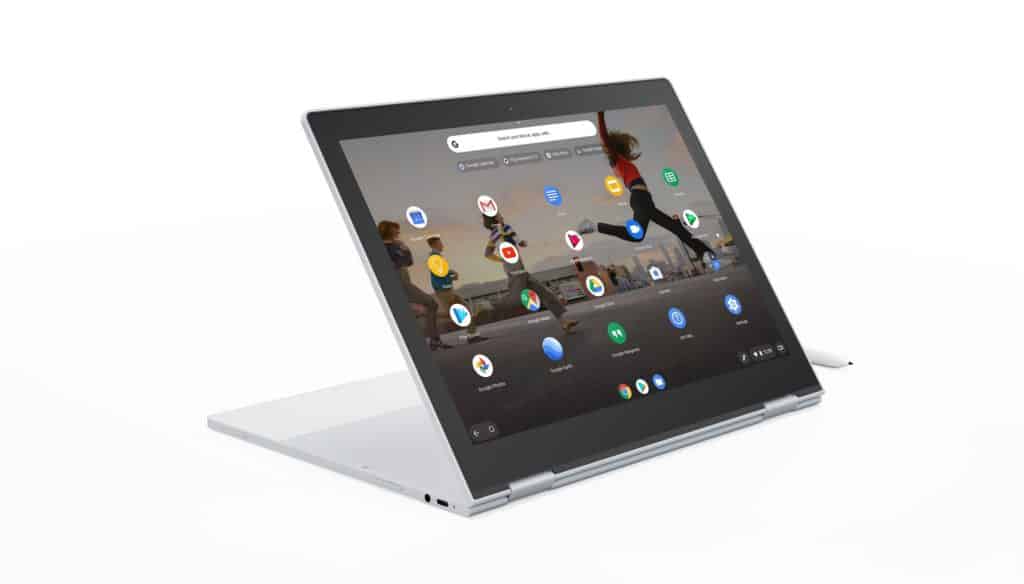 The Google Pixelbook is arguably the best Chromebook ever made, and it makes for a fantastic Linux machine. Google created it to show to the whole world that Chromebooks don’t have to necessarily be made cheaply and priced accordingly.

With a price hovering around $1,000, the Google Pixelbook is anything but affordable, and it’s completely natural to experience a sticker shock when seeing its price for the first time. However, the initial shock quickly transforms into admiration as you learn more about what this premium Chromebook has to offer.

The most popular version of the Google Pixelbook is powered by 7th Gen Intel Core i5 processor and equipped with 8 GB of RAM and 128 GB of storage. Its long-lasting battery supports fast charging technology, allowing you to get about 2 hours of use in just 15 minutes. The 12.3-inch 360-degree touchscreen display boasts an ultra-fine resolution of 2400 x 1600 pixels, resulting in a supreme multimedia experience.

Because the Google Pixelbook is aimed at power users, Google outfitted it with a comfortable backlit keyboard that’s a joy to type on. As an optional accessory, you can purchase the Pixelbook Pen, and use it to write, draw, and design naturally. 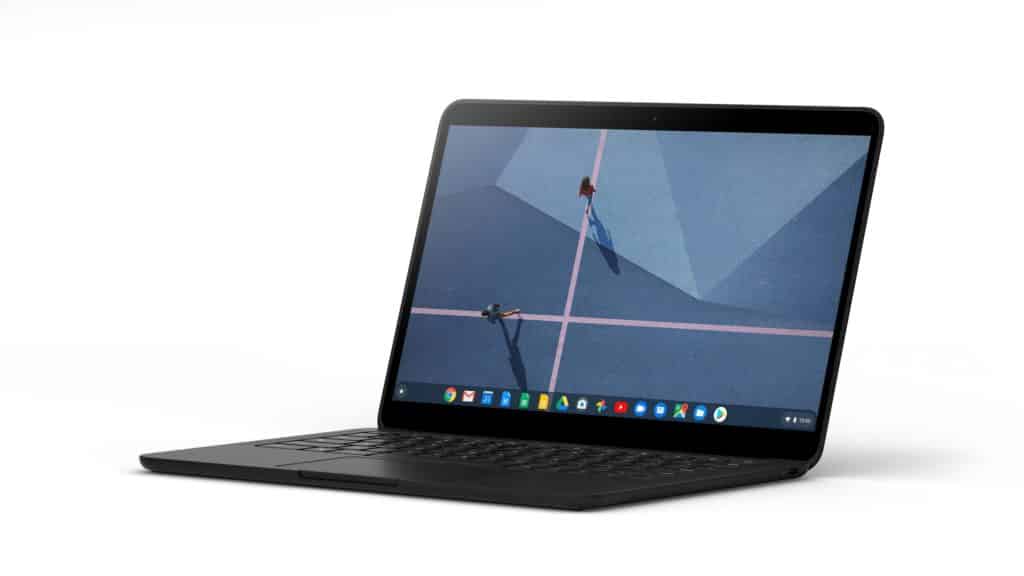 The Google Pixelbook Go is our favorite Linux-compatible Chromebook for on-the-go productivity. You can get it with an m3, i5, or i7 processor from Intel and up to 16 GB of RAM and 256 GB of storage. The m3 version offers the most impressive battery life, but it doesn’t have enough performance for more demanding Linux apps—at least not if you’re a heavy multi-tasker.

Regardless of which version of the Google Pixelbook Go you choose, you’ll always get to enjoy a 13.3-inch Full HD display with wide viewing angles, high maximum brightness, and realistic color reproduction. The display is complemented by dual stereo speakers for uncompromising multimedia experience.

If you often use a laptop in quiet public places, such as the library, you’ll appreciate the backlit keyboard with the so-called Hush Keys, which barely make any noise despite being their precision and a surprisingly long key travel distance. And since the Google Pixelbook Go is completely fanless, there’s no reason to worry about it making noise either.

If you’re looking for a relatively affordable Chromebook that doesn’t look and feel cheap, the Asus Chromebook Flip C434TA is a solid choice. It’s powered by the Intel Core m3-8100Y processor, which is capable of up to 3.4 GHz despite consuming very little power. You can get it with 64 GB of storage space and either 4 or 8 GB of RAM. We highly recommend you splurge on extra RAM because the additional 4 GB really make a difference when multitasking and using Linux applications alongside apps for Chrome OS.

What really makes the Asus Chromebook Flip C434TA stand out is its 14-inch Full HD display with ultra-narrow bezels (just 5 mm). For us, a Chromebook with a 14-inch display represents the perfect balance between productivity and portability. You can comfortably use two applications side-by-side without straining your eyes or maximize a single application with DPI scaling set at 100% to see more information without scrolling.

Thanks to its 360-degree hinge, the Asus Chromebook Flip C434TA can instantly transform into a large tablet so that you can enjoy your content any way you like. Two reversible USB 3.1 Gen 1 Type-C ports make it possible to connect a broad range of devices, and there’s also one legacy USB 3.1 Gen 1 Type-A (Gen 1) port, as well as a microSD slot for storage expansion. 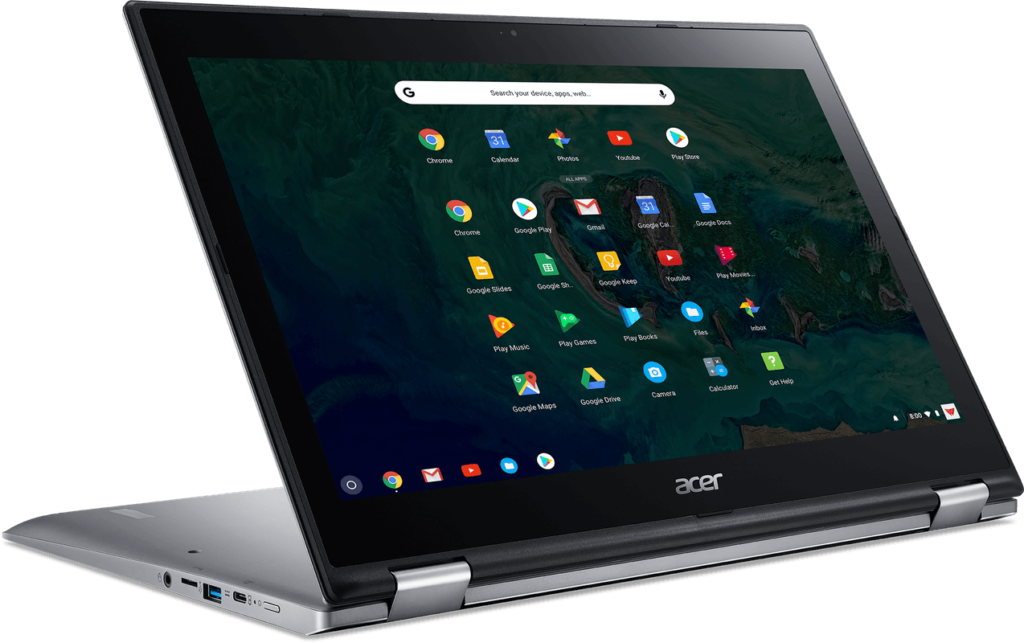 Why spend your hard-earned money on a laptop and a tablet when you can purchase the Acer Chromebook Spin 13, an affordable 2-in-1 convertible with enough processing power to run Linux and a cleverly integrated stylus for drawing, writing, and jotting in tablet mode.

Many affordable convertibles are powered by a low-end processor with insufficient performance for serious multitasking, but not the Acer Chromebook Spin 13. With the Intel Core i5 8250U processor, 8 GB of memory, and 128 GB of storage, this allrounder has what it takes create large spreadsheets, develop software applications, and edit video. Because a powerful processor naturally consumes more power, the Acer Chromebook Spin 13 has a large battery that lasts up to 10 hours—more than enough for a full day of use.

Displays with a 16:9 aspect ratio are great for multimedia, but they leave something to be desired when it comes to browsing the web, writing documents, coding, or doing any other activity that benefits from more vertical screen real-estate. That’s why the Acer Chromebook Spin 13 has a 13.5-inch touchscreen display with a 3:2 aspect ratio and stylus support. Once you experience what it’s like to work a display with this aspect ratio, you won’t look at 16:9 laptops the same way ever again. 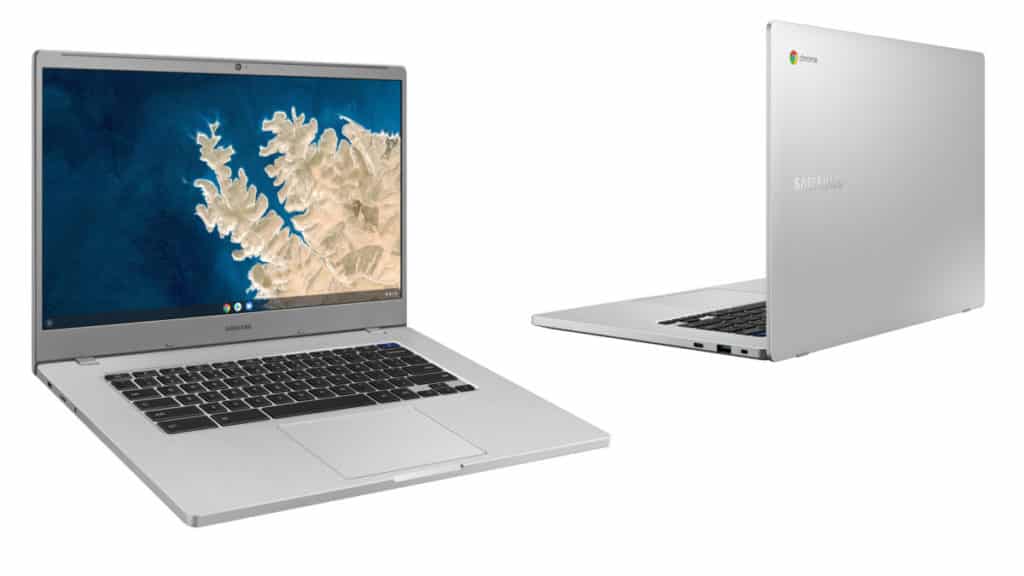 In many ways, the Samsung Chromebook 4+ embodies the very essence of Chromebooks by blending modest hardware specifications with a build quality that punches way above its league. If running Linux on a Chromebook isn’t your top priority (just something you would like to try), this might be the right device for you.

We say this because the Samsung Chromebook 4+ has the Intel Celeron N4000 processor, whose limited performance isn’t suited for anything but the most lightweight Linux applications. That said, Chrome OS apps run just fine on this Chromebook, which is great news because the 15.6-inch display really makes them come to life.

Included with the Samsung Chromebook 4+ is a fast USB-C charger capable of charging the Chromebook even with the processor running at 100%. When charged to its maximum capacity, you can use the Chromebook for up to 10 hours. If only were the keyboard backlit, this would be any budget-minded student’s dream Chromebook. 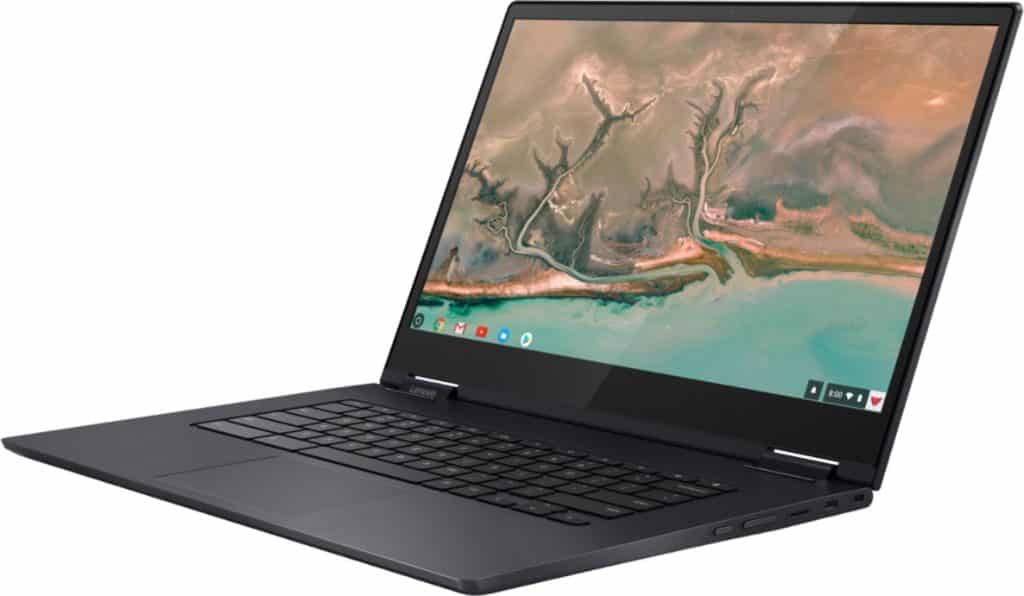 Everyone knows that Lenovo can make a fantastic laptop capable of satisfying the needs of even the most die-hard Linux users. With the Lenovo Yoga Chromebook C630, the company is applying its expertise to create a Chromebook capable of rivaling Windows laptop. 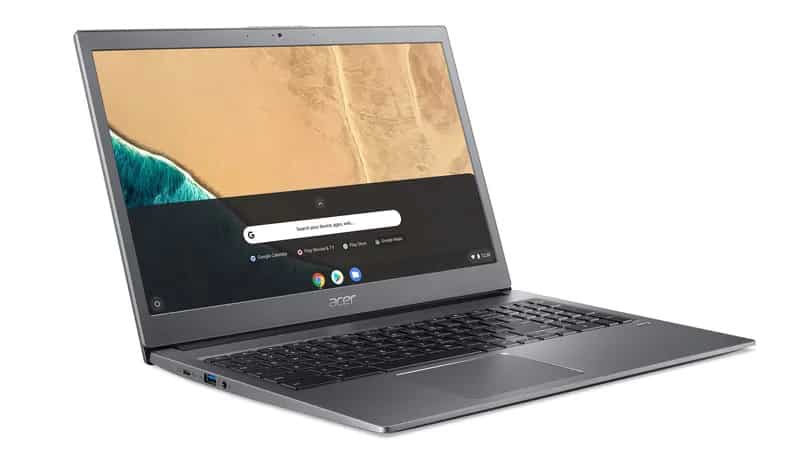 Acer is known mostly for its budget-oriented laptops, but the Acer Chromebook 715 proves that the company can make a truly premium device. In fact, this Chromebook received multiple prestigious design awards, including the iF Design Award and the Red Dot Award.

The Acer Chromebook 715 has a 100% aluminum chassis, so it’s both light and durable. Because the aluminum isn’t painted but anodized, you don’t need to worry about paint chips and scratches. Anodization also improves heat dissipation and corrosion resistance, so overheating isn’t an issue.

The Acer Chromebook 715 is one of only a few Chromebooks with a numpad that we would recommend. It’s powered by an 8th generation Intel Core i processor, so apps and games load instantly and run without lag. Even demanding users who frequently edit video and do other processor-intensive tasks should be more than happy with its performance. 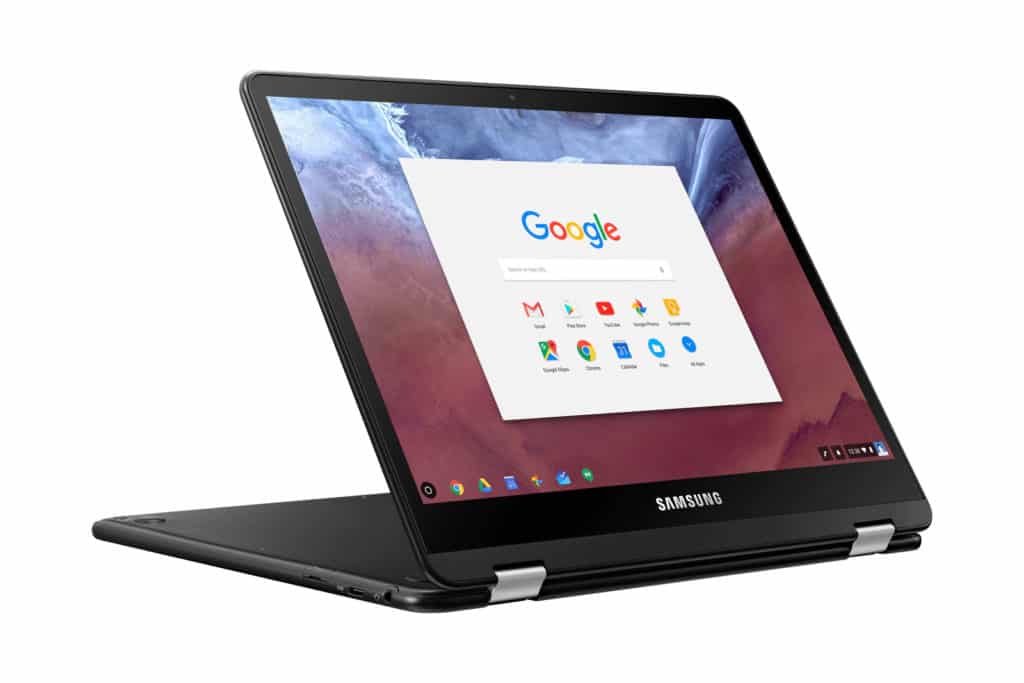 There’s no denying that the Google Pixelbook (our favorite Chromebook for Linux) is an impressive machine, but not everyone is willing to spend around $1,000. That’s where the Samsung Chromebook Pro comes in, offering similarly jaw-dropping specifications for a fraction of the price.

Specifically, the Samsung Chromebook Pro is equipped with a power-efficient Intel Core m3 processor, 4 GB of RAM, 32 GB of storage space, and a 12.3-inch display with a resolution of 2400 x 1600 pixels. Because the display has an aspect ratio of 3:2, you can enjoy both widescreen viewing and the portrait tablet experience. The display is without a doubt the star of the show here. Its 360-degree hinge lets you flip it all the way around for use in tablet mode with the included stylus.

Because the Samsung Chromebook Pro weighs just 2.38 pounds and measures 11.06 x 8.72 x 0.55 inches, you shouldn’t have any trouble carrying it around for the entire day or holding it in your hands for a long period of time. 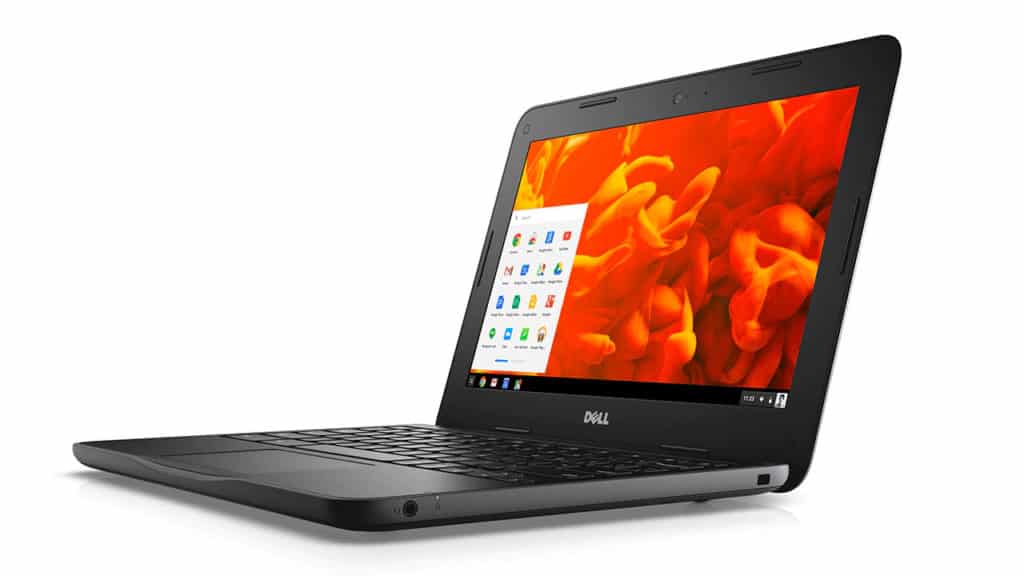 The Dell Inspiron 11 is a great Chromebook for casual users who are looking for durability, speed, and simplicity in a portable design. Its textured black composite chassis is resistant to fingerprints and smudges. Because the Chromebook has generously rounded corners, it can easily resist all the bumps and drops it encounters during daily use.

Thanks to the Intel Celeron processor, it also handles Chrome OS apps with ease, even when you open several of them at once. Heavyweight Linux applications are, unfortunately, a challenge for this laptop, but you must keep in mind that portability is by far its most important feature. The 11.6-inch display makes the Dell Inspiron 11 so compact that you can throw it inside any bag or pouch without any issues and its advanced anti-glare coating makes it easier to use the Chromebook outside.

For such a compact Chromebook, the Dell Inspiron 11 offers an impressive selection of ports, including a full-sized HDMI port, two regular USB ports, a microSD card reader, audio jack, and Noble lock slot. 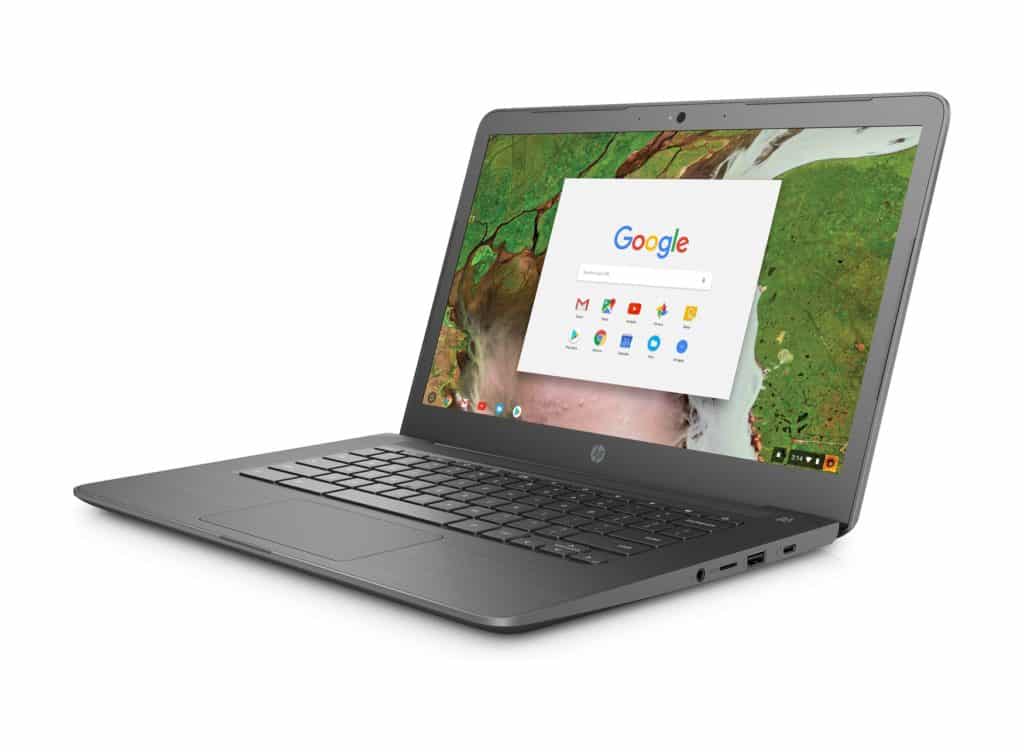 The HP Chromebook 14 is one of the most affordable Chromebooks on this list, and you need to keep this in mind to understand where its value comes from. This is not the right machine for power users or demanding professionals who are willing to spend extra money to enjoy smooth performance and premium build quality.

This device is aimed at budget-minded people who don’t want to spend more money than necessary just to browse the web, send emails, and do schoolwork. That’s why the HP Chromebook 14 comes with a low-end processor (the AMD Dual-Core a4-9120) and just 4 GB of RAM and 32 GB of storage space.

Fortunately, HP understands that even people who don’t need outstanding performance can appreciate a long battery life, great build quality, and comfortable input devices. To make this budget-friendly Chromebook even more attractive, HP decided to connect the 14-inch display to the chassis with a 180-degree hinge, making it easier for its users to watch movies in the bed or share the screen with others.