We may not feel like it, but in our everyday “computer” life (irrespective to the digital device you’re using), data is the most important factor. It’s the most important aspect. That’s why data needs to be secured, safe. If data becomes corrupted, destroyed, stolen or lost, it can cost from almost nothing to even everything in your life!

Obviously, it depends on what data is being questioned. For example, if your operating system is corrupted or broken, you can reinstall it. Similarly, if software becomes corrupted or broken, it’s repairable. However, in the case of other data, corruption can be devastating. There’ll be a price to pay.

For data security, Linux is one of the finest platforms. It offers some of the best techniques for backing up your important data and restoring efficiently when needed. In this article, let’s check out some of the best backup and restore tools for Arch Linux.

Here are some of the well-known and reputed backup and restore tools for Arch Linux.

Timeshift has been around for quite a while. It’s a backup tool for Linux platform that allows creating filesystem snapshots with the help of BTRFS or rsync+hardlinks. It’s simple but with advanced features. Because of its power and benefits, Timeshift is now the official backup and restore tool for Linux Mint!

Don’t worry; Timeshift is also available on Arch Linux through AUR. It’s also possible to install Timeshift directly from the source but going through AUR is recommended. AUR includes some additional tweaks on top of the original package for better compatibility and performance on Arch Linux. 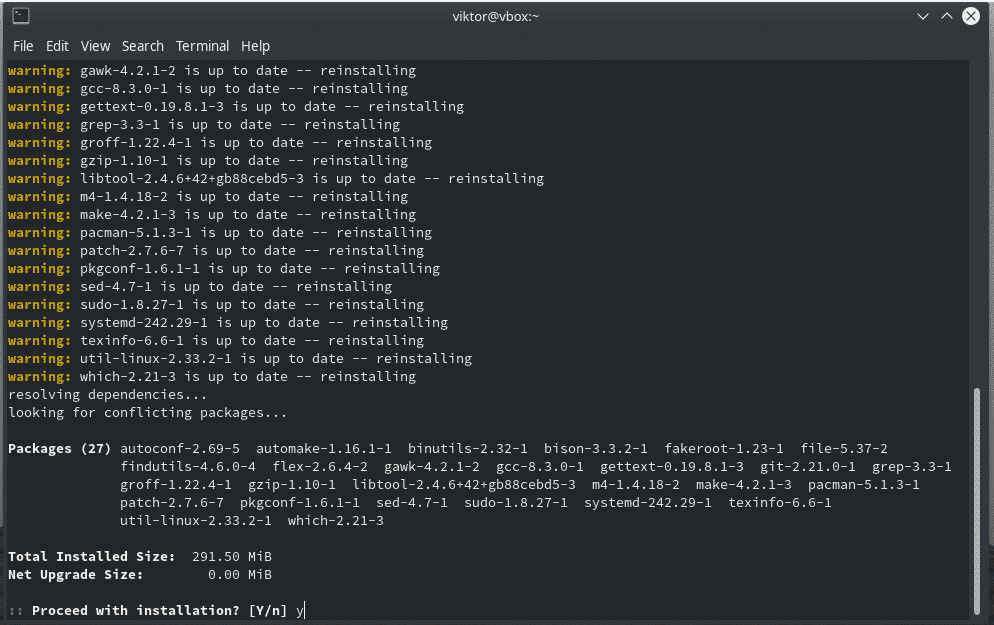 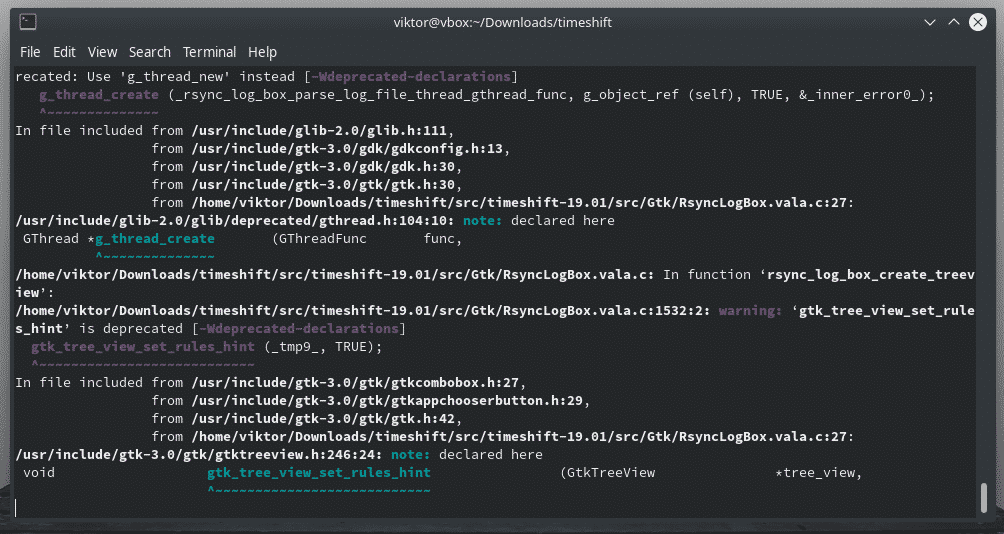 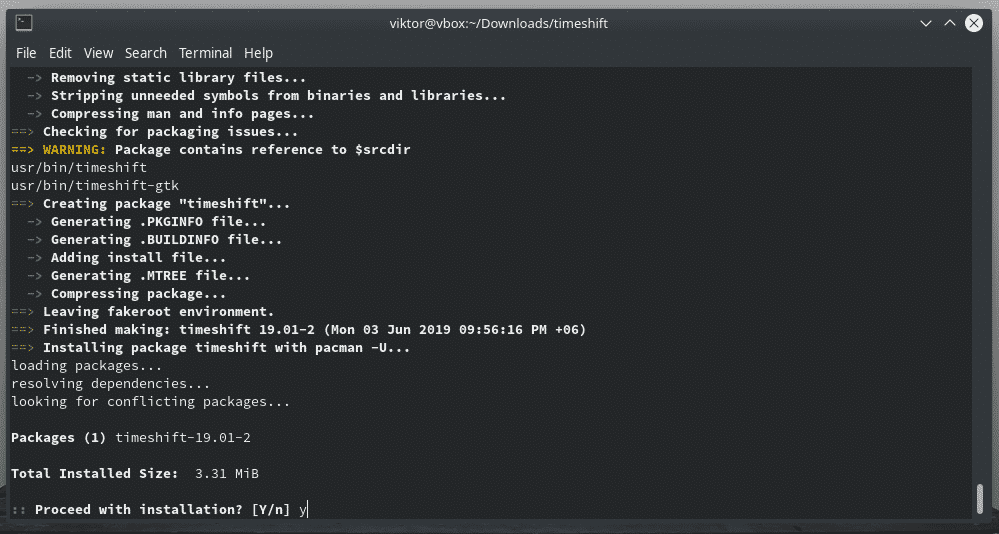 Once the installation is complete, start Timeshift. The interface is simplistic and self-explanatory. 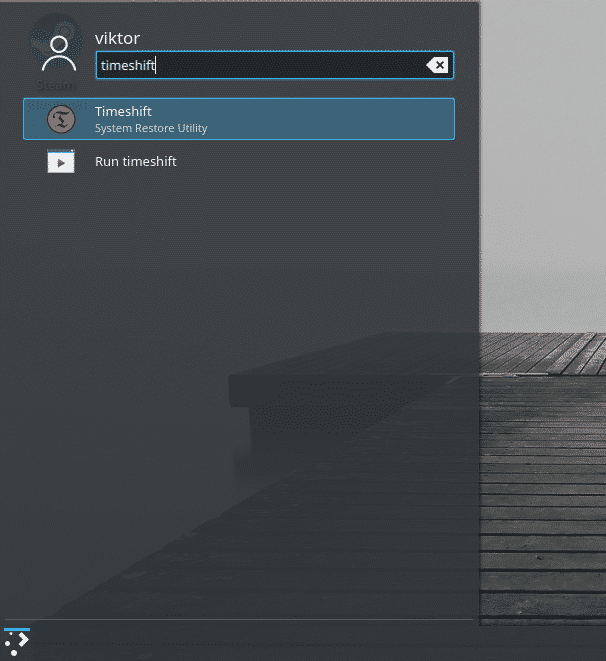 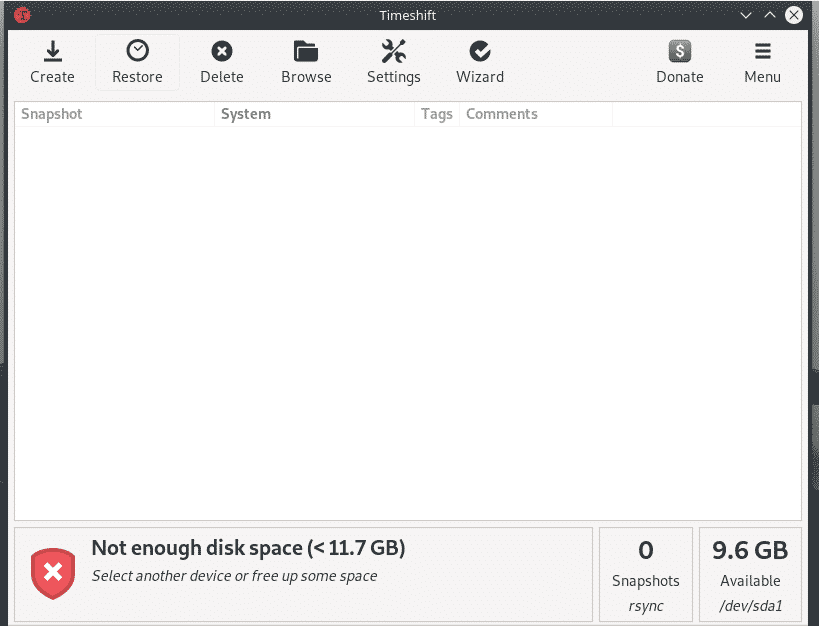 You’ll be able to configure Timeshift. Don’t worry; you can configure all the options later on. Learn how to use Timeshift to backup and restore data. 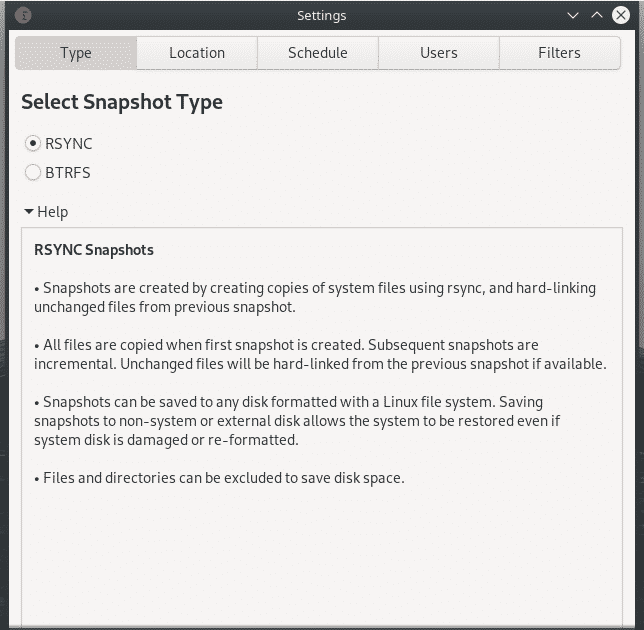 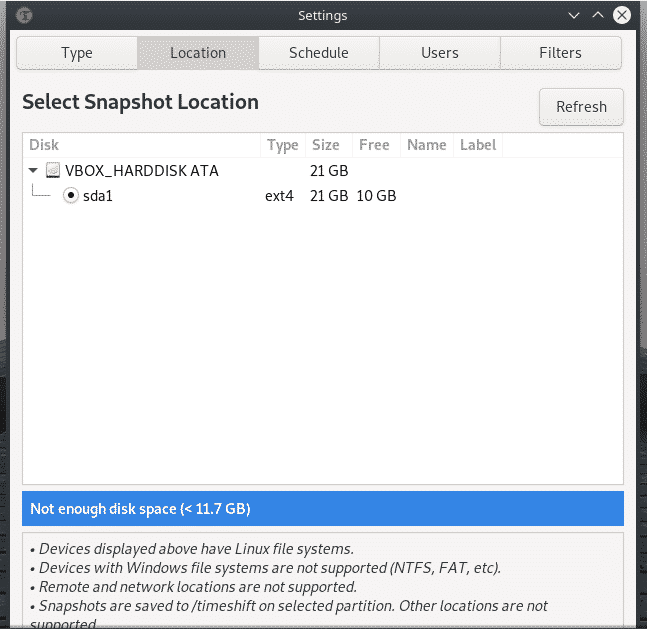 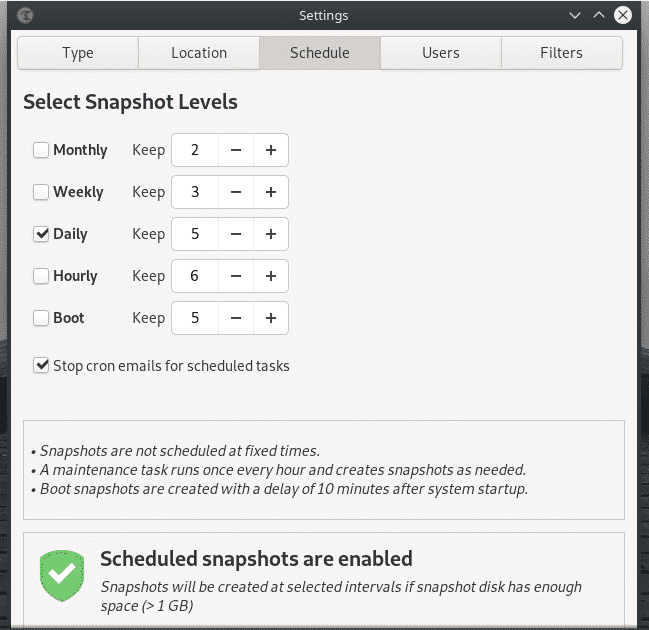 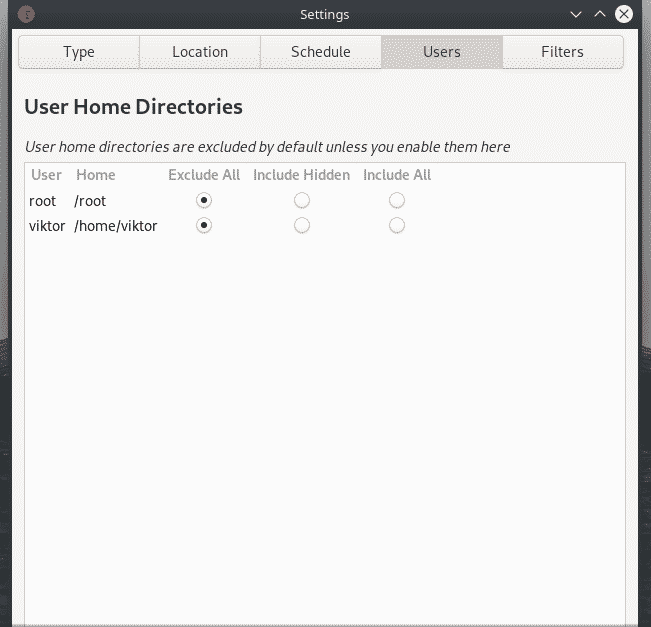 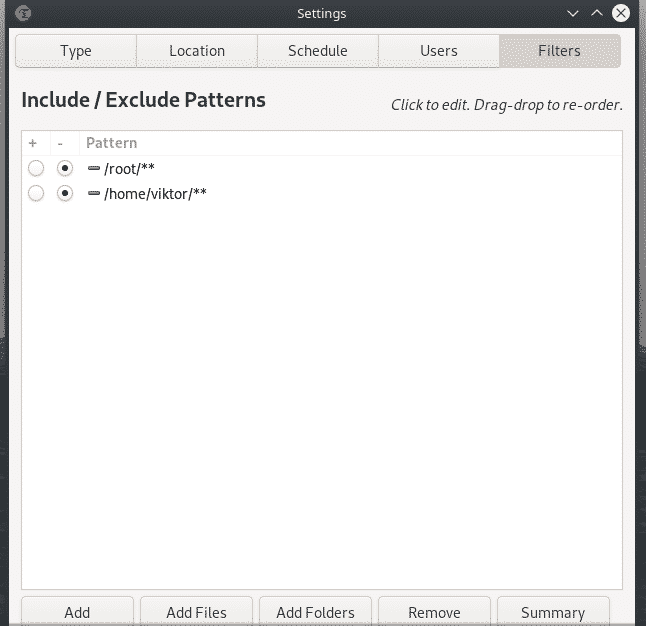 Timeshift is most suitable if you’re interested in having a professional-grade backup and restore functionalities. You can use it for light backups but it’s up to you whether it’s worth the effort.

It’s a backup tool from the KDE suite. This tool allows backing up your desired file(s) and/or folder(s) with the help of tar and gzip at a local directory. The tool also allows automated backups of the directories. KBackup also offers a profile system!

KBackup is in the official repository of Arch Linux. Install KBackup. 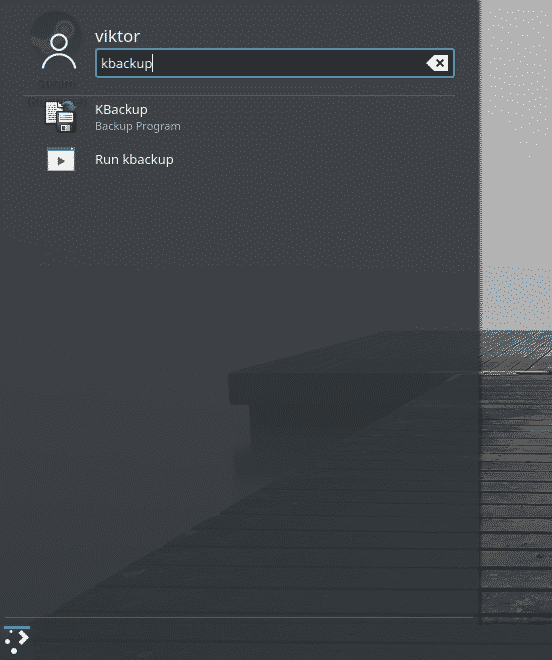 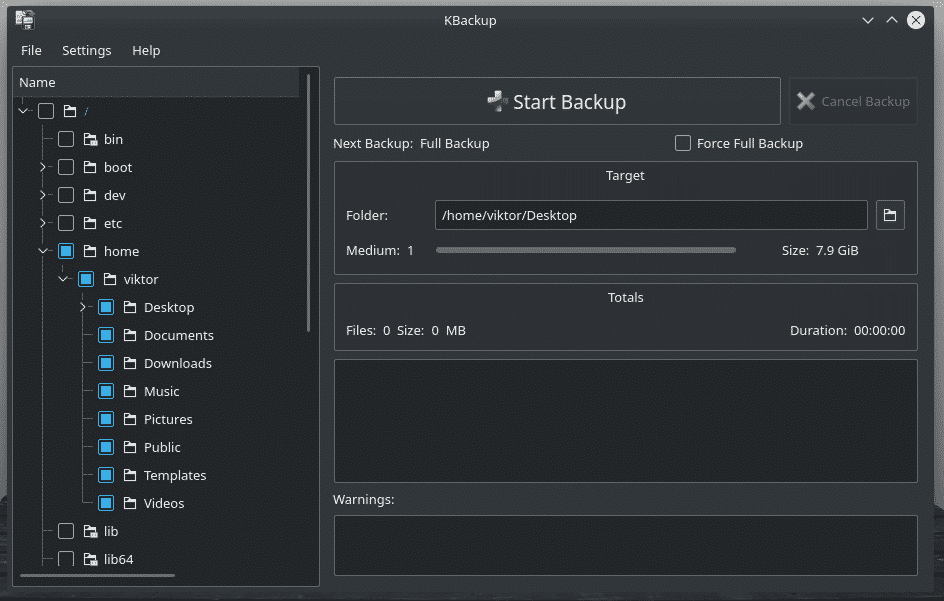 The entire interface of the tool is simplistic and intuitive. As you can see, the left panel is for selecting the folder(s) that you want to backup. On the right side, there are all the progress bars and backup destination. 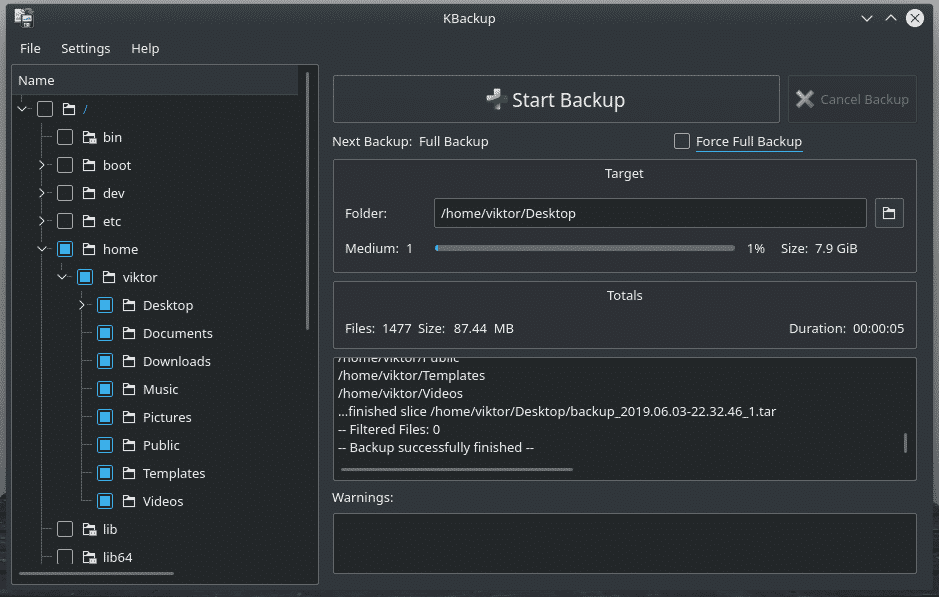 As for restoring the backup, it seems like the tool itself doesn’t include any built-in functionality. You have to manually extract the tar files to the backup location. Sort of painful but doable. That’s why if you’re in need of just a simplistic tool for simple backups, then KBackup is the way to go.

This is, by far, the most dominant force in the field of backing up and restoring valuable data. Unlike the previously mentioned tools, this one is a command-line tool. Because of its features and functionalities, it’s tremendously popular among Linux experts, especially system admins.

Rsync features a number of rich functions like incremental backup, remote backups, backing up the whole directory tree and file system while maintaining the file permissions, ownership, links and a lot more.

Because of its sheer popularity, rsync has been a part of Arch’s official package repository. Install rsync.

You can use rsync in the most unusual way. For example, how about copying files using rsync? For all the available options rsync has to offer, check out the man page of rsync. 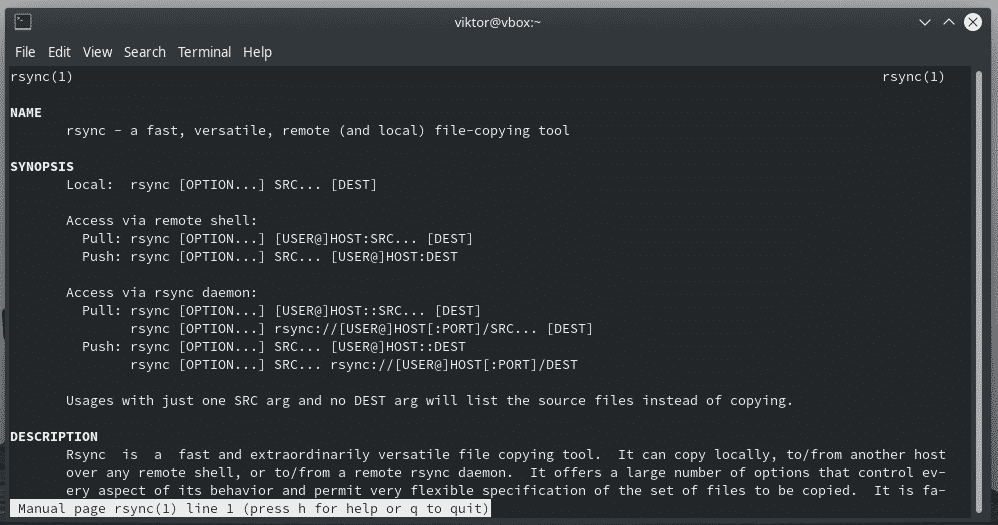 Even calling rsync will show all the available options but with fewer explanations. 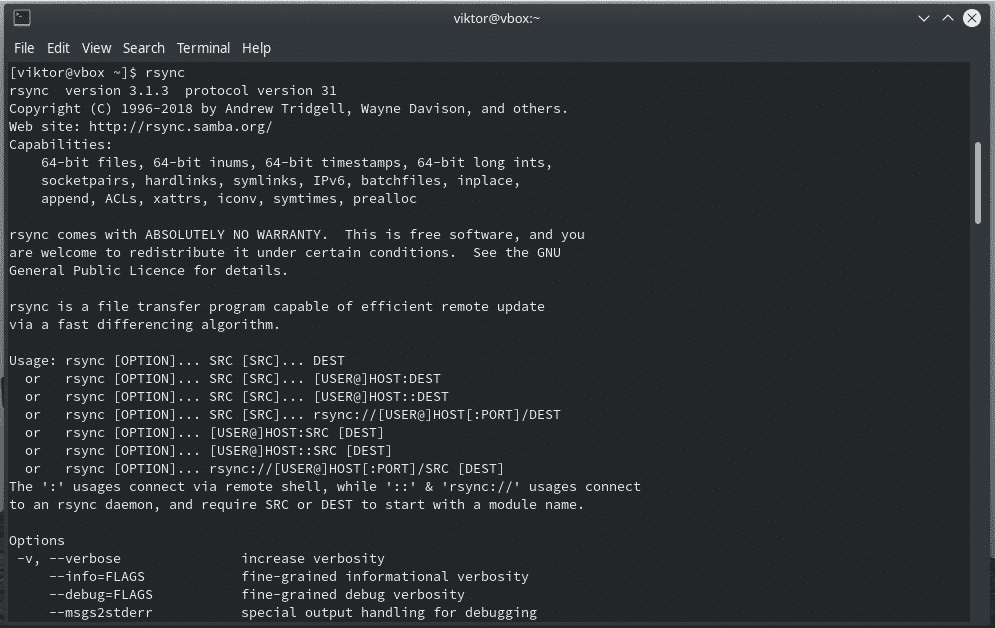 If you need a GUI for rsync, there are several available options – Grsync, Timeshift and Luckbackup. 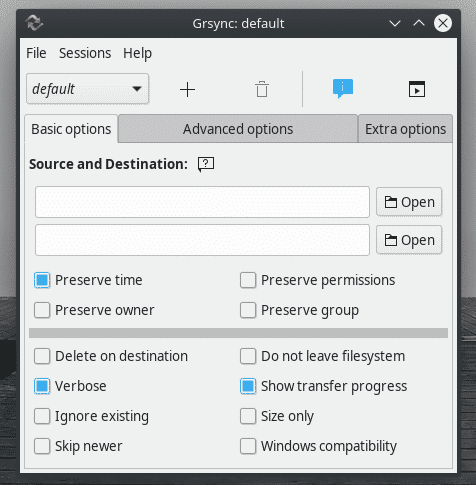 It’s another awesome solution for backing up and restoring data. Instead of a single package, it’s actually a collection of various packages that, all together, allows system admins to manage backups, recoveries and data verification across a network. Bacula is capable of using different media as storage solution, for example, tape and disk and others.

Bacula is more of a client/server-based backup tool. Because of its flexibility and control over the entire scenario, Bacula is more suitable for intensive scenarios. However, it’s not so user-friendly like Timeshift or KBackup. So, Bacula officially recommends the tool for experts only.

Bacula consists of the following parts.

It’s another free and open-source tool with a simplistic and secure CLI. Unlike previously mentioned apps, this one is easier as a command-line tool. The core feature of Restic is its strong stance against attackers in any kind of storage environment.

Just like other backup tools, Restic is available directly from AUR.

Restic will present all the way of utilizing the tool by running the following commands. 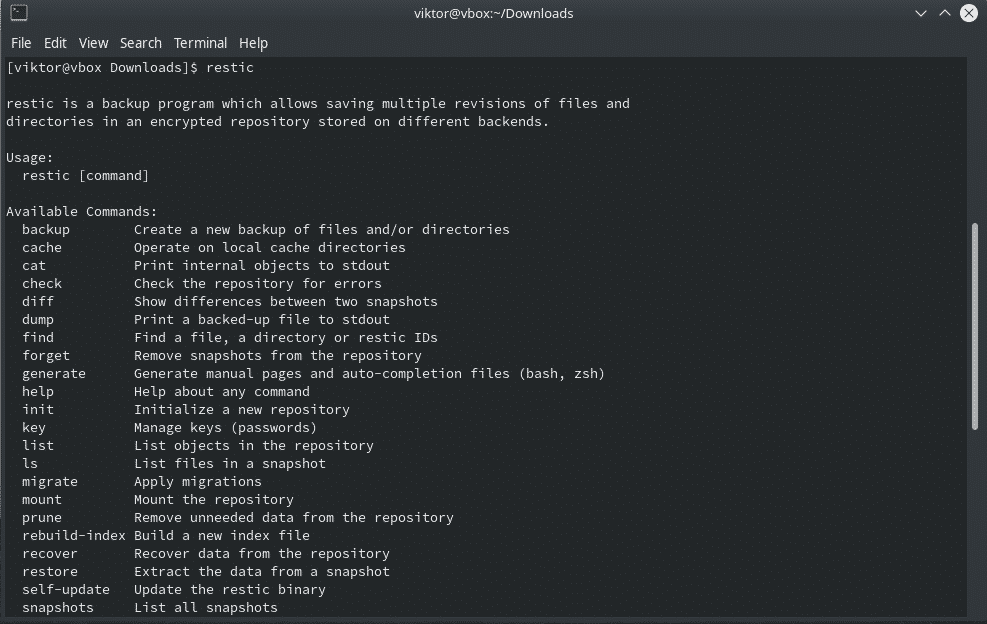 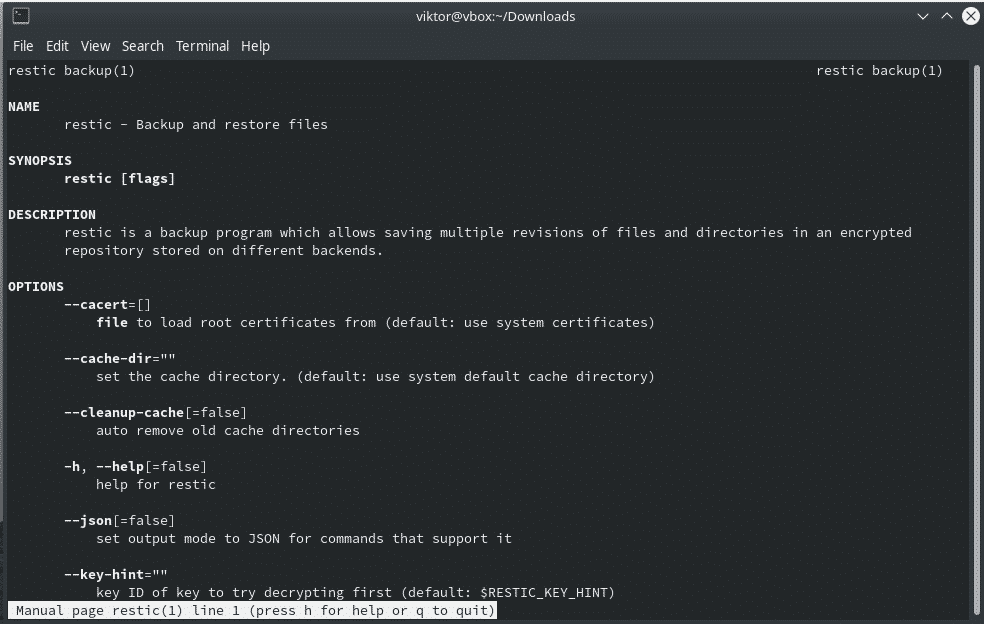 Based on rsync, rsnapshot is a great tool for taking filesystem snapshots on local machines. It can also operate over SSH. It’s possible to automate snapshots via cron jobs. Rsnapshot is quite an interesting tool for its disk space efficiency. 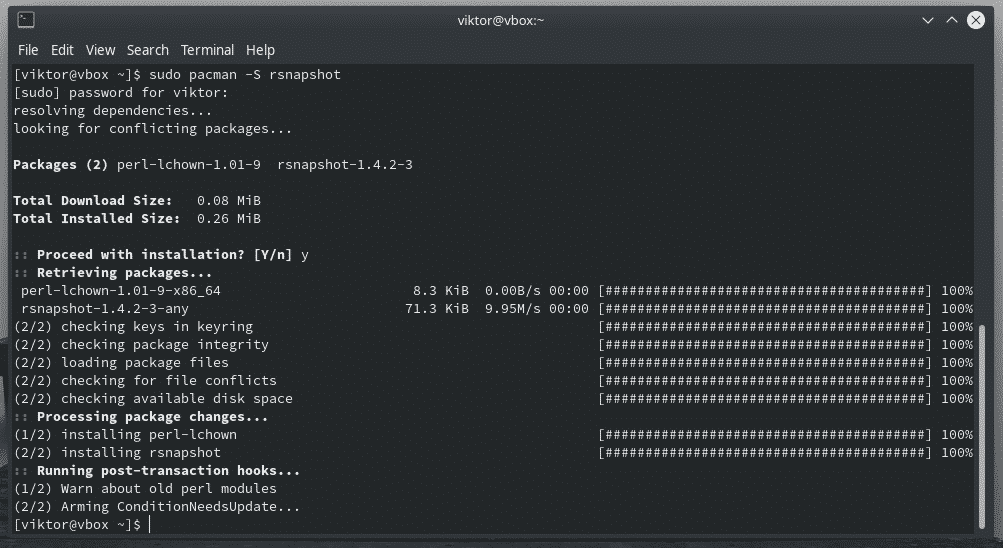 Check out the usage of Rsnapshot. 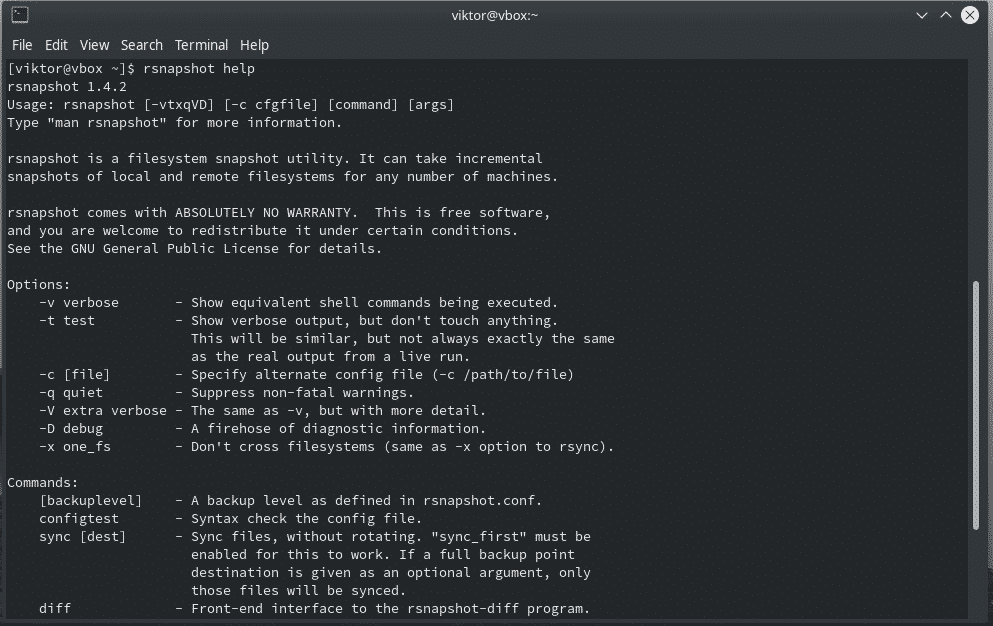 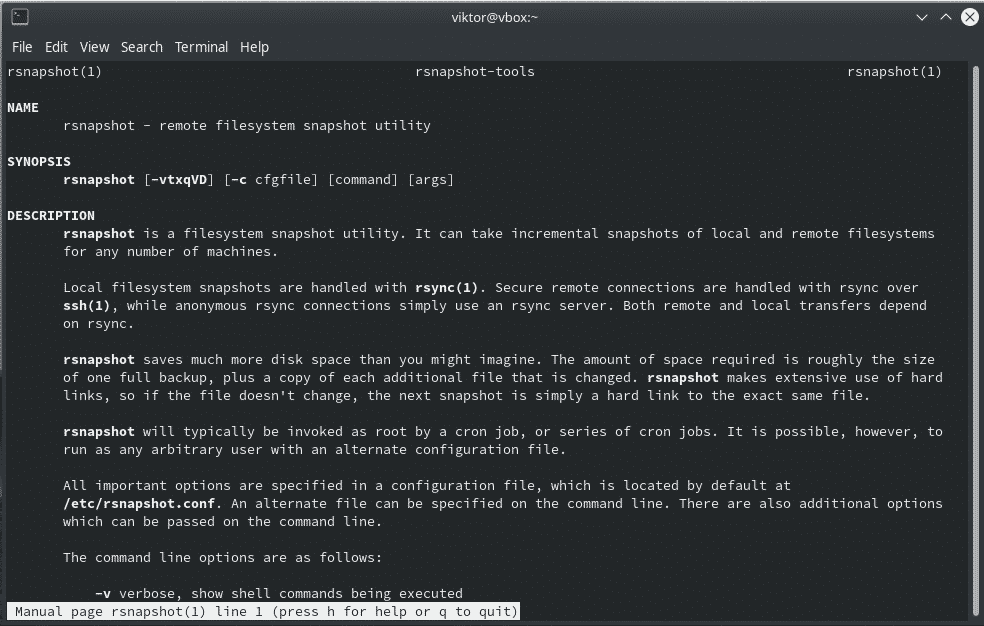 It’s more of a freemium solution. CloudBerry Lab only offers the client with advanced features for backing up your data. Using CloudBerry, you can back up your data to a custom server or any existing cloud solutions. It also integrates well with VMware, Hyper-V, Microsoft SQL Server, G Suite, and others. 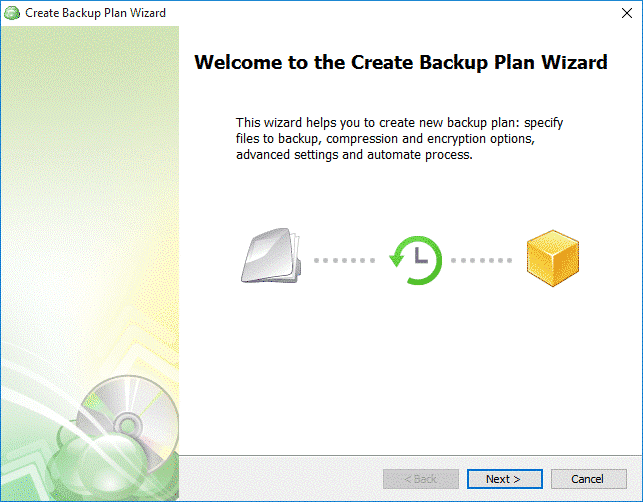 There are a number of tools for the Linux platform that can take care of data backup and restore pretty easily. Some tools require sophisticated knowledge of the system whereas some require very basic understanding. It’s ultimately up to you to choose which backup tool to go for.

There are also a handful of other really good backup tools. Check out the best backup and restore tools for Linux as a whole.