When you start out with Arduino, you have a vast selection of choices. This may be confusing. To make it easier, start by thinking what you want your first project should do for you. The different packages have more or less components. Motors and servos, sensors and LEDs are usually included but not always.

Arduino is many boards, based on micro controllers from ATmega. Since Arduino is open source, there are also many other manufacturers that do the same. The best way to start is to use a starter kit with the UNO v3 board. There are many others, but this one is easy to get started with and cheap.

What is the Arduino used for?

An Arduino usually takes measurements from sensors and acts on them to take an action elsewhere. A simple idea is to have a light sensor tell the Arduino to turn off unnecessary lamps. In these kits, there is usually enough components to make simple robots and have both switches and sensors.

The first kit is the official Arduino starter kit. It comes with a breadboard, which makes sense since it is supposed to be for you to learn the basic. To do that, you need to experiment. Soldering is time consuming. A kit that contains a book and servos, a small DC motor, a UNO rev 3. A breadboard, loads of switches and other components. There is no power adaptor included. You are supposed to use your computers USB-port to power it. Many people buy that afterwards, when you want to create your own projects. 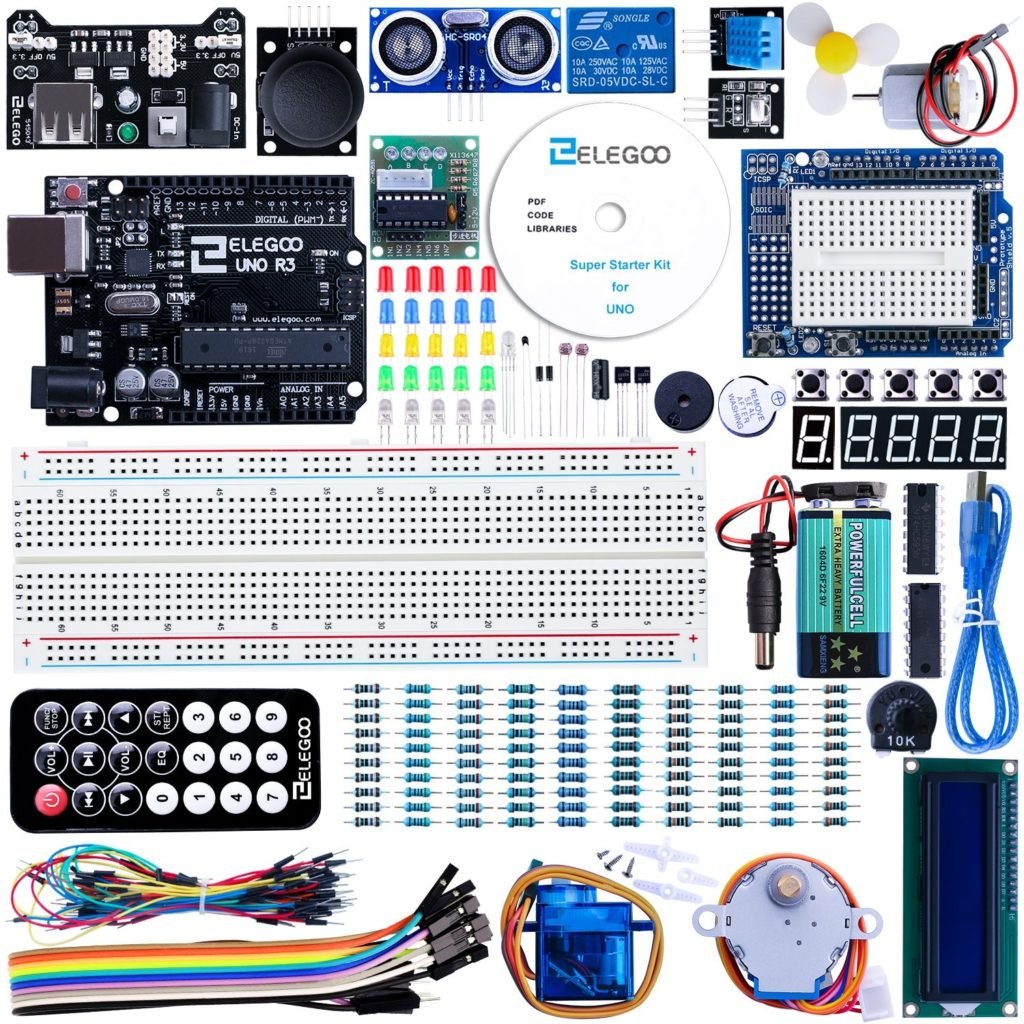 This kit has many more components, including keyboards, remotes and even an RFID card and reader. This kit is bigger than the official one. It is not delivered with a paper book. Instead, the documentation and the examples comes on a CD. You can download the newest ones from their web page. They also have bigger kits, and smaller ones. Just in case you have components or plans that do not match the components you need for your project. 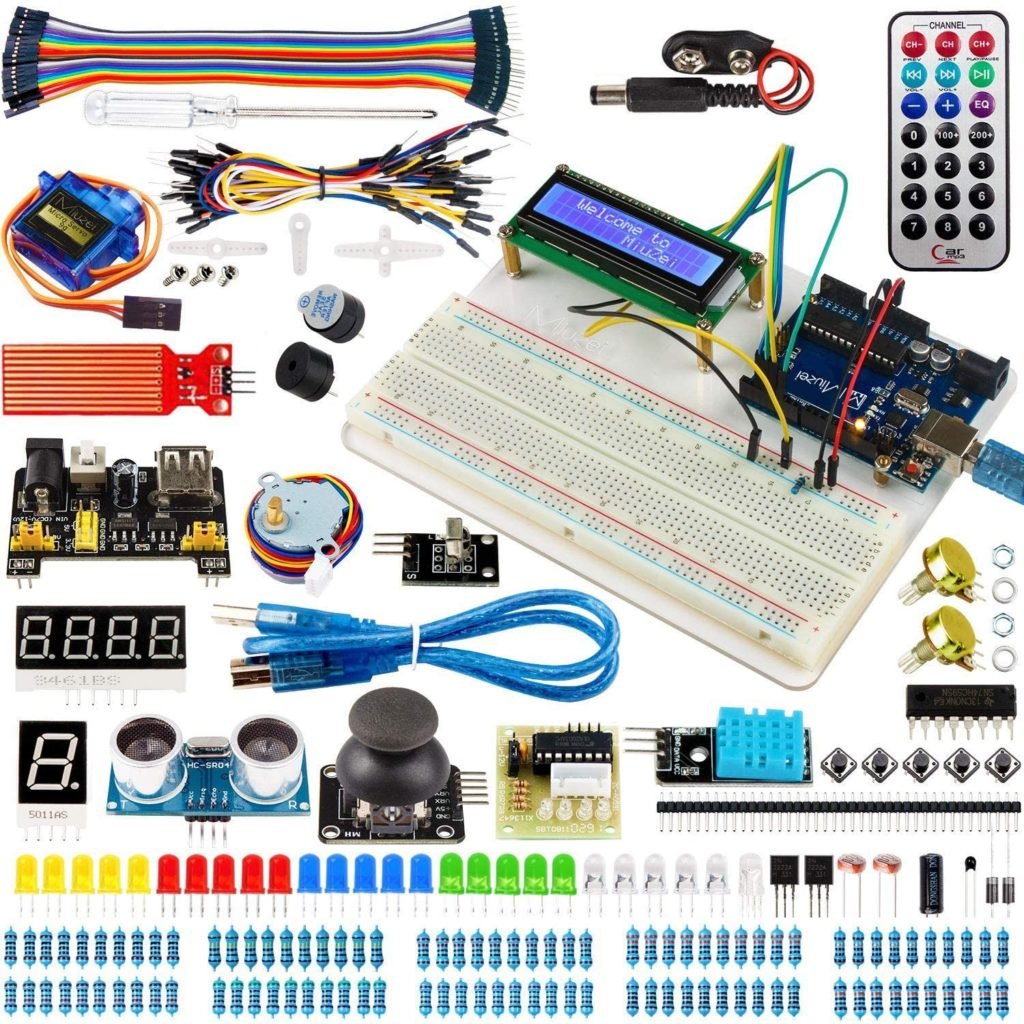 The Miuzei kit has a similar set of components as the Elegoo, but also includes a water sensor. The keypads and display are good for the price. It has 28 lessons and many cables and breadboards. Note that it also includes a propeller, that they call a fan. 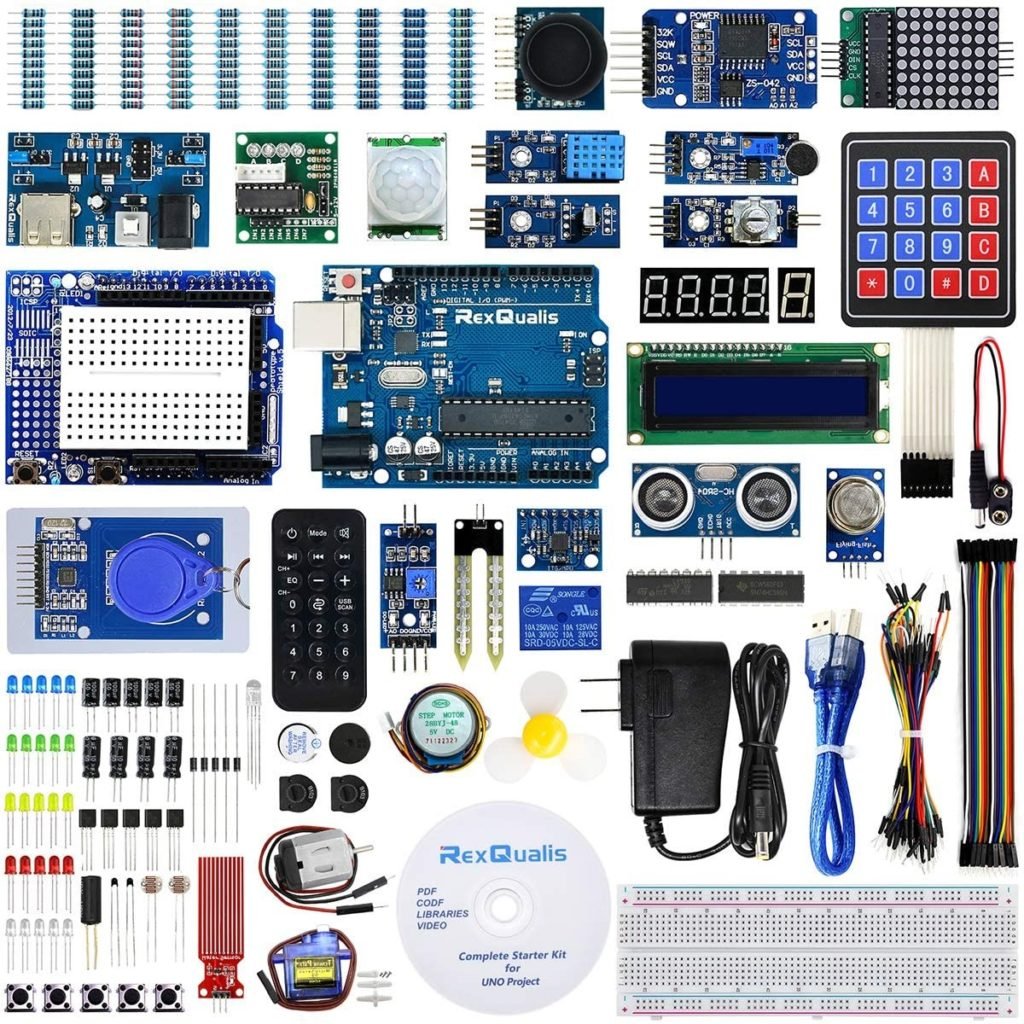 The RexQualis kit is the one with the most components out of the box. In this box you have a CD with project descriptions for an infrared controlled stepper motor a soil moisture sensor module and more. The possibilities with this kit is the biggest of them all. It is also decently priced. 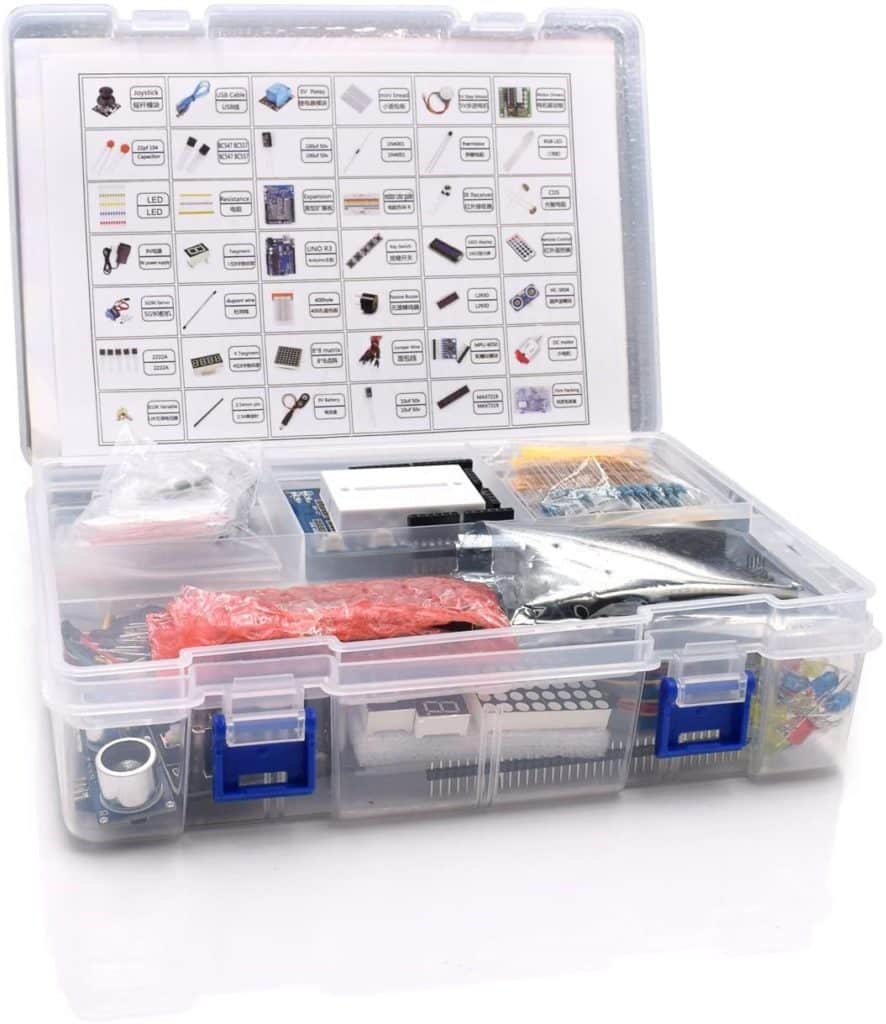 Here we have a kit that compares favourably to the other kits. The kit has many components. However, the instructions are not up to par. If you know a bit of electronics and Arduino, this is a good kit but you have to figure out much yourself. Community??? 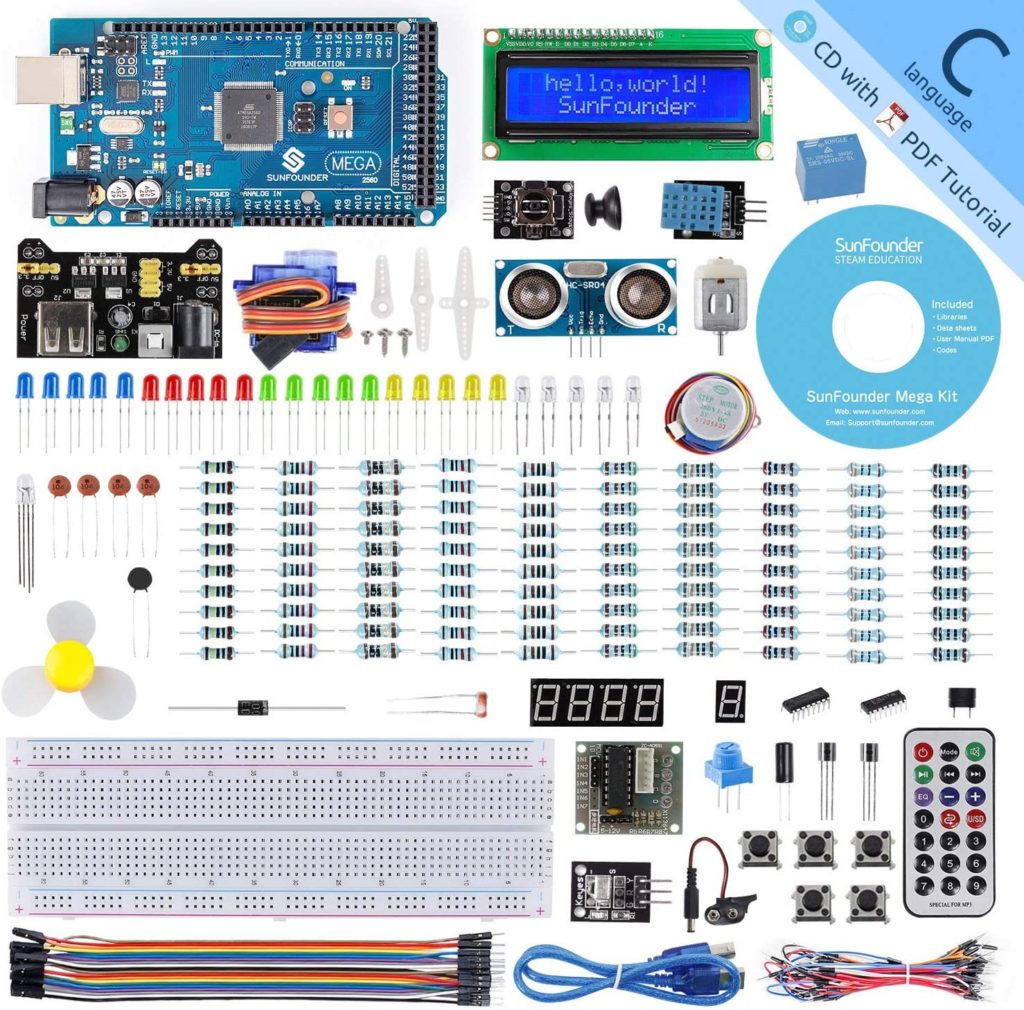 Sunfounder has several different starter kits, the one below is for sensor of different kinds. The array of sensors is impressive and can be used for many projects. The documentation is delivered on CD but is also available from their website. You have all you need there. Remember to take the entire ZIP file, code is in separate files and not in the pdf document. Sunfounder also have other kits; The IoT kit, the Smart Home Kit and many robotics kits. On a side note; they have Raspberry kits also. 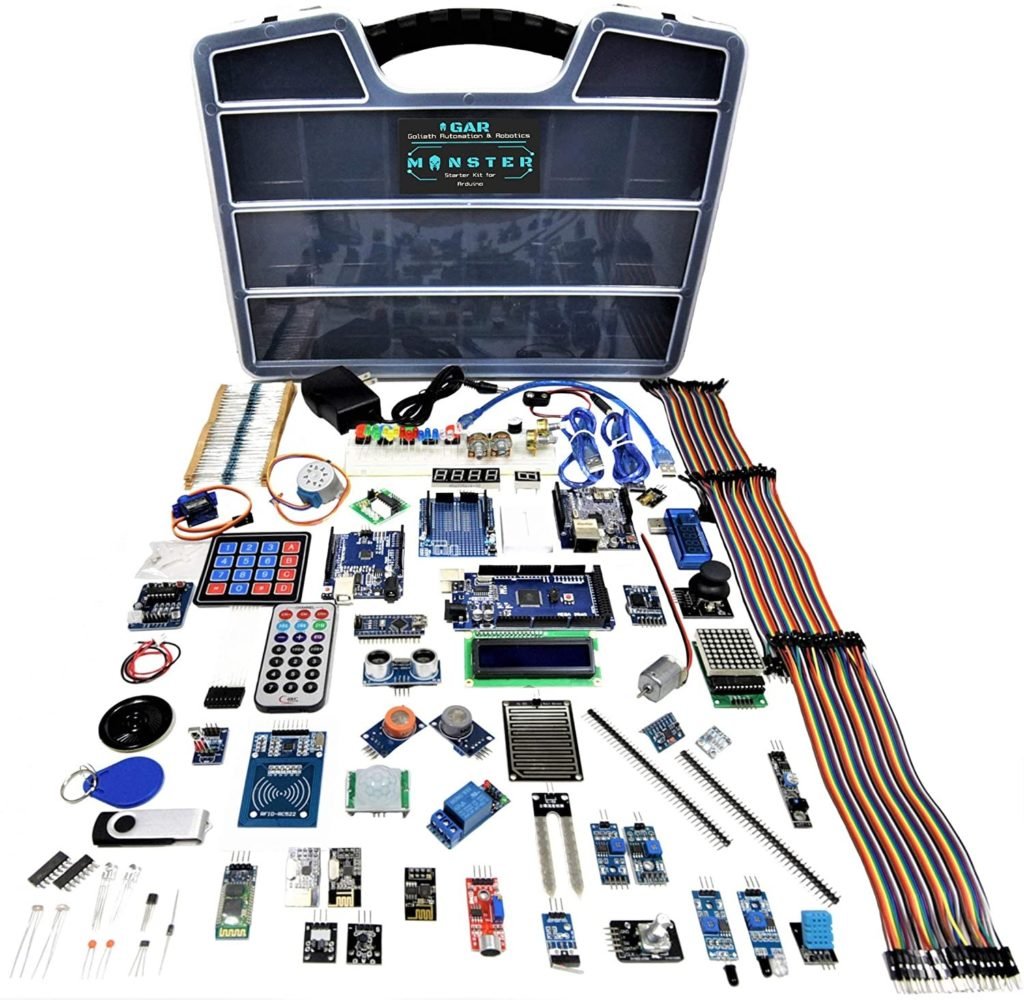 As the name states, this kit is big. It has the same as the others but have added wireless, Bluetooth, WiFi and an Ethernet shield. Packed with that and a multitude of sensors, you need to pay more for the kit. Do make sure you have a lot of energy for projects and experiments. Perhaps build a robot, there are motor drivers added for good measure. This package even includes, the UNO R3, Nano V3 and MEGA 2560.

As you can see from list, you have many options. You can go cheap and build up to more advanced stuff and you can focus on specific stuff. You also have the grand kit, where you have all the options in one box. Remember, you will receive a breadboard in these kits. If you do not get one, think again, it makes it so much easier to try things out and experiment. Also, remember to find as much help as you can from both manufacturers and community to get you where you want to go.