After purchasing a high-end PC or upgrading an older computer, it’s important to double-check that all of the components are in good working order. Turning on your system may not reveal any defects, but that does not imply that everything is in working order. In this case, a RAM Tester is required.

Memory test software, often known as RAM test software, is a type of program that tests your computer’s memory system in considerable detail. It is used to ensure that the storage index in the memory device is functional. The basic purpose of any memory test is to write a piece of data to each location in the memory device and then read it back to verify the data.
However, if your computer refuses to boot or reboots at random, you may have a memory problem. If programs fail, you will hear beep codes during reboot or error messages like “illegal operation” or a Blue screen of death.

What Is Memory Testing?

Memory testing is performed to confirm the smooth working of each section in a memory device. It is usually performed by professionals to examine the alignment of data lines and addresses.

Memory testing of RAM can be done by trusted applications. Working memory tests in RAM tests are quite simple as it involves writing information to each section of RAM and reading it back. If the values read by the tool are mismatching, your RAM might be at fault.

Before running a memory test, we must know the common problems of memory. Some of the problems are

An electric wiring problem to the processor can cause the memory device to behave abruptly. This can be caused by a fault in the address, data or the control line. Incorrect storage of data or sometimes data is not even stored can be some symptoms of memory behaving incorrectly.

The system will normally act as though there is a wiring fault or a missing memory chip if a memory chip is available but wrongly put into its socket. In other words, a portion of the memory chip’s pins will either not be attached to the socket at all or will be linked in the incorrect location. The data bus, address bus, or control wiring will all contain these pins. Any wrongly inserted chips will be recognized automatically as long as you inspect for wiring faults and missing chips.

So, it’s a good idea to check your memory from time to time using the tools given below.

MemTest86 is a highly recommended tool for memory testing. It is a completely free and extremely user-friendly memory test software program. To use it, download it from the MemTest86 website and save it to a flash drive for the booting process. 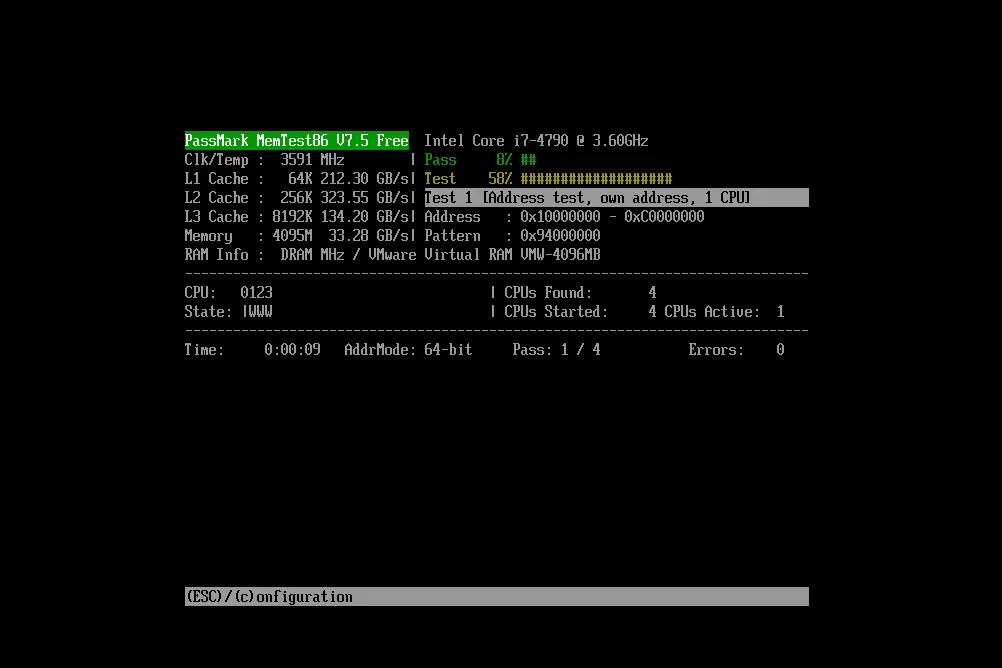 To run a memory test, you don’t need an operating system because it runs from a USB device.

However, if you’re a newbie in this software, advanced features might confuse you. 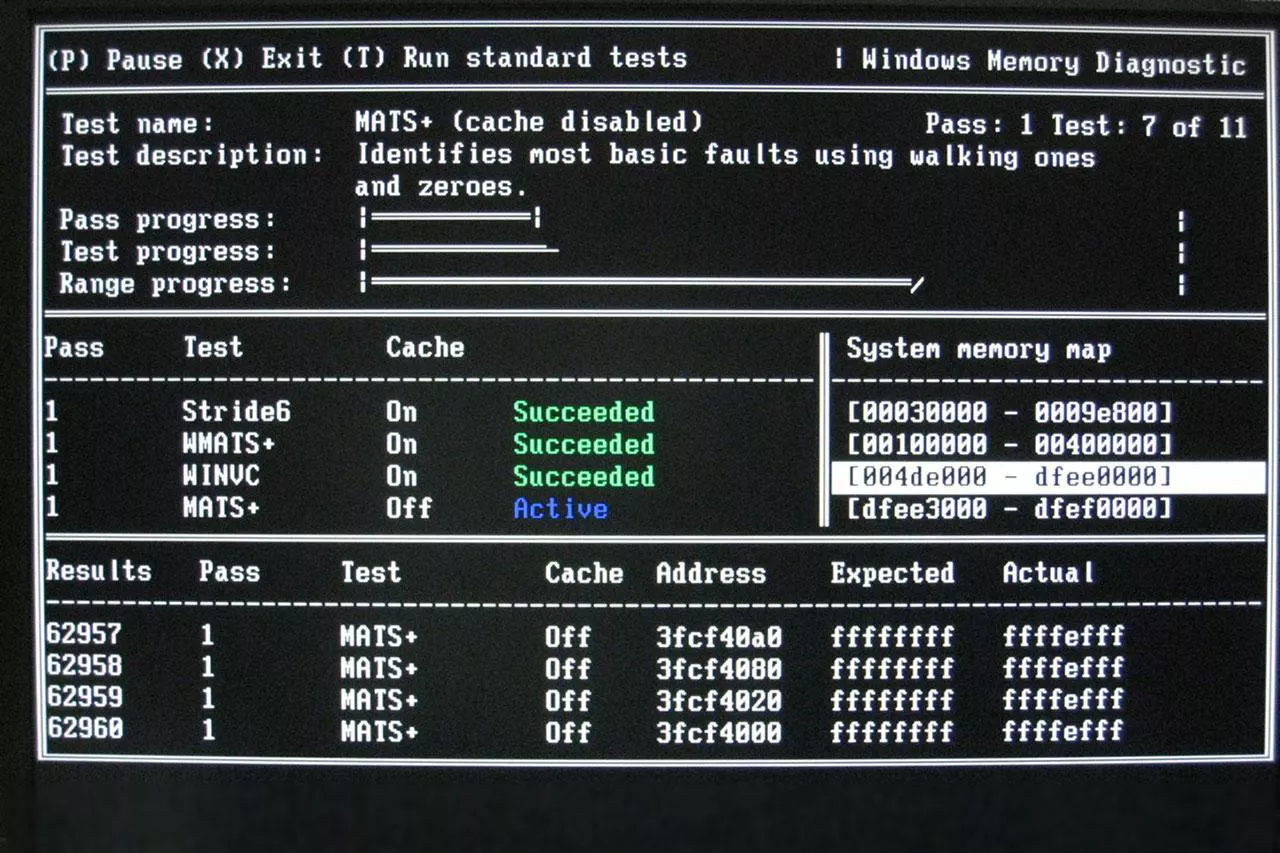 Windows Memory Diagnostic is a free memory testing software that runs many tests to recognize what is wrong with the computer’s memory. To make a bootable floppy disc or ISO image for burning to a disc or flash drive, simply download the installer application and follow the instructions. Windows RAM Diagnostic will immediately begin evaluating the memory after starting from whatever you created and continue to do so until you stop it. If the first round of checks returns no errors, your RAM is most likely in good shape.

However, it can test only 4GB of ram and has been updated to date. 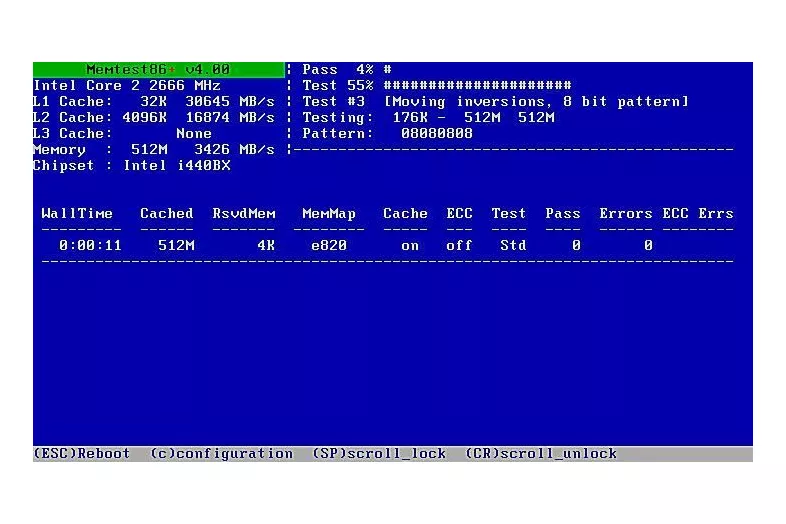 Memtest86+ is an updated version of MemTest86 memory test software and is also available for free. If you’re having trouble running the Memtest86 RAM test or if Memtest86 shows memory faults and you’d want an expert second opinion, we recommend running a memory test with Memtest86+. Memtest86+ comes in ISO format, which can be burned to a disc or a USB drive. It may seem surprising that Memtest86+ is ranked third, but because it is so similar to Memtest86, your best chance is to try Memtest86 first, followed by WMD, which runs differently and has a more comprehensive set of memory tests.

However, it is not so user-friendly because it is entirely text-based. 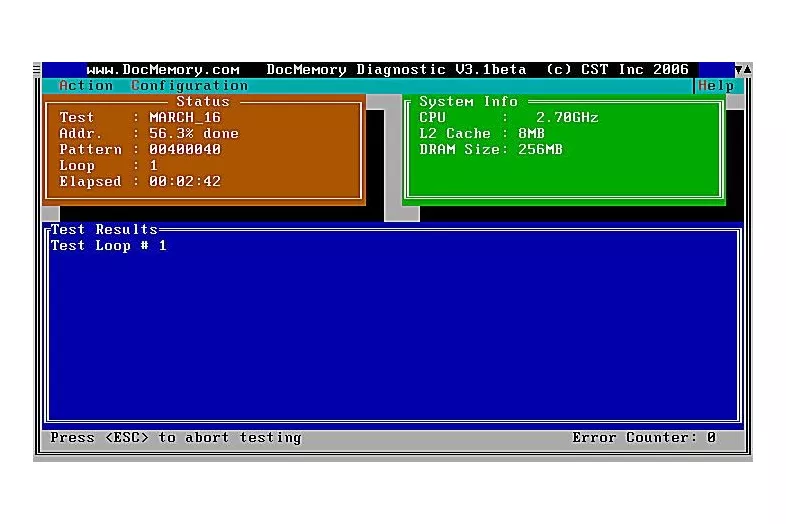 Another computer memory diagnostic tool is SimmTester.com’s DocMemory Diagnostic, which works similarly to the others we’ve mentioned. The fact that you must manufacture a bootable floppy disc is one of the primary drawbacks. Floppy drives are no longer found in most PCs. Instead of using bootable discs like CDs and DVDs, these memory test apps employ bootable USB devices. 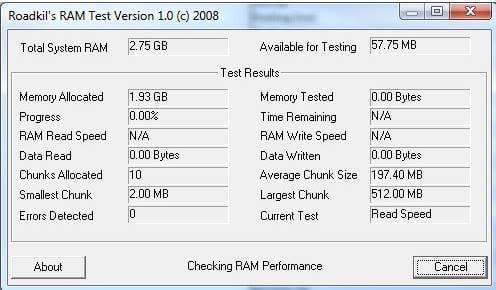 It is a free and open-source RAM testing program that aids in the detection of any potential memory hardware flaws. The most appealing feature of Roadkil’s RAM Test is that it can be run in the background while you work on something else. Following a successful test, the software will provide data such as total system RAM, accessible memory, RAM read speed, and other useful information. Furthermore, the software’s free availability has made it a hit among users.

Memory testing is especially important during product development when the hardware’s and design’s dependability is still unknown. However, during the final release of the product, it will be better if a memory test is carried out. This memory test needs to be performed every time the system is restarted. This basic test suite functions as a collection of hardware diagnostics when used together.