We are living in the age of smartphones and smart devices. Devices we can take on the go – everywhere. Each new model aims for a smaller build. So, it’s logical that many of us long for using our favorite open-source OS on a compact machine. If you are one of them and looking to purchase a Linux Tablet, the options are far and few between. But the good thing is, more manufacturers are starting to realize the potential a Linux distro on a small form factor can provide. Below are some of the current and upcoming models to keep on your radar this year. And hopefully, you can even find your best Linux tablet. 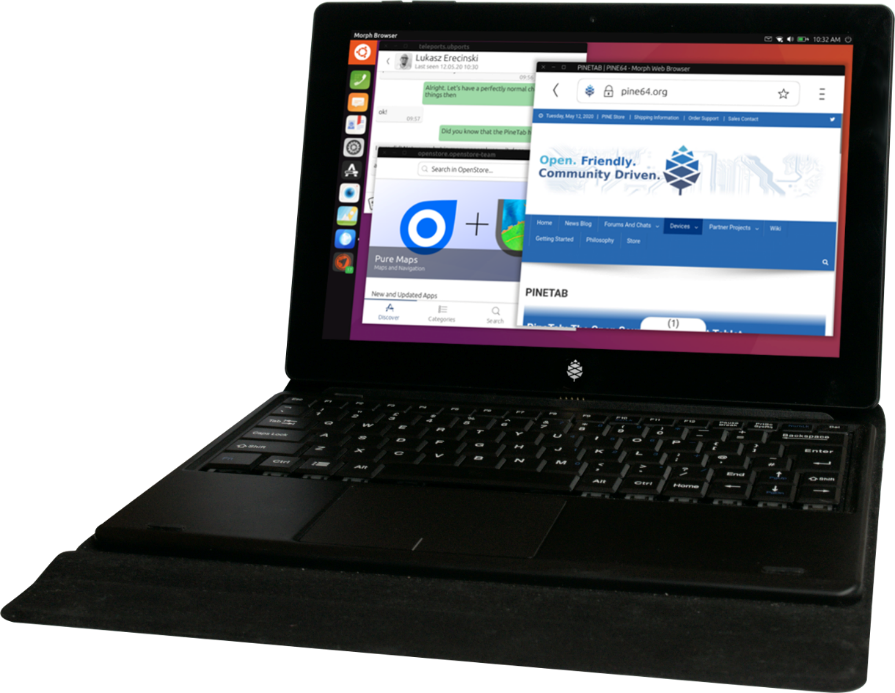 The PineTab is the first full-fledged Linux Tablet. It runs on a mainline Linux kernel, a proper Linux distribution, and ships with all the apps missing from mainstream tablets.

It’s a 10.1 inches tab built around the Allwinner ARM64 SoC, aided by 2GB of LPDDR3 RAM and 64GB eMMC. It supports Wifi, Bluetooth, front and rear camera. Depending on the OS and the app overload, these specs should provide decent performance. Ports are pretty limited with just USB 2.0 A host, micro USB 2.0 OTG, DVI ports, and a microSD card slot.

While PineTab is a fully functioning unit on its own, you can make changes to your package depending on your needs. For instance, you can opt for the PineTab adapter board that allows you to attach other expansion modules (such as GPS, data connection, and SSD) for additional functionality.

Overall, if you want one of the best Linux tablets for on-the-go performance, PineTab is a good option. Its base configuration comes at a $99 cost and performs quite decent. But, this is early hardware, so expect some software issues. 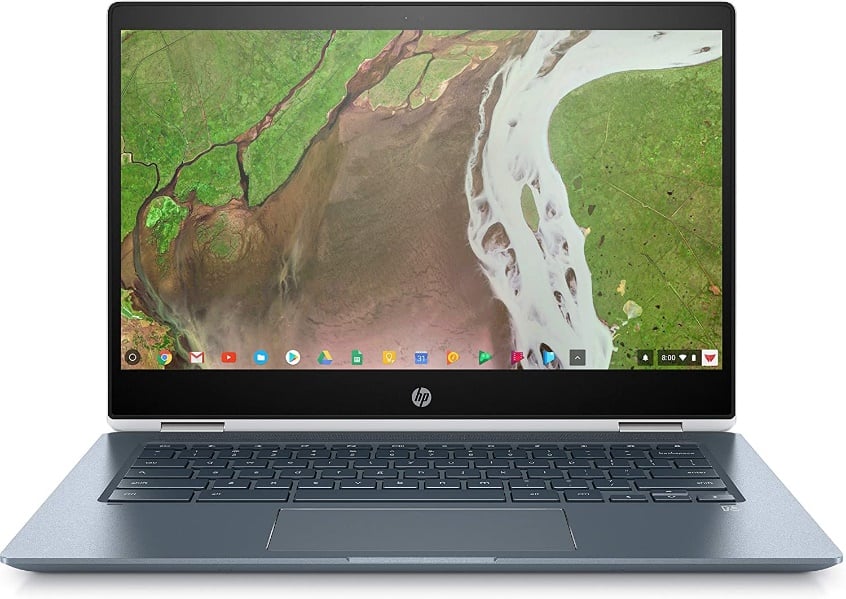 Chromebooks are powered by Chrome, which is a Linux-based OS. This makes HP Chromebook x360 another great option to consider. It’s also included in our list of the best Chromebooks to consider this year. Sure, it’s a laptop, but also a 2 in 1. This means you can use it as a Tablet by rotating its screen 360 degrees.

The standout feature of this 2 in 1 lappy is its 14 inches diagonal full HD display. It is also multi-touch-enabled, saving you from the touch hiccups many Linux apps are notorious for running into. Its user interface looks pretty similar to a web browser, making it easy to use for experts and newbies alike.

Just make sure you apply the right tweaks here and there in the settings to make sure Google can’t interfere with your privacy. As for the price, compared to tablets on this list, Chromebook x360 sure feels a bit pricey. However, its top-notch performance and hassle-free Linux compatibility pretty much make up for it. 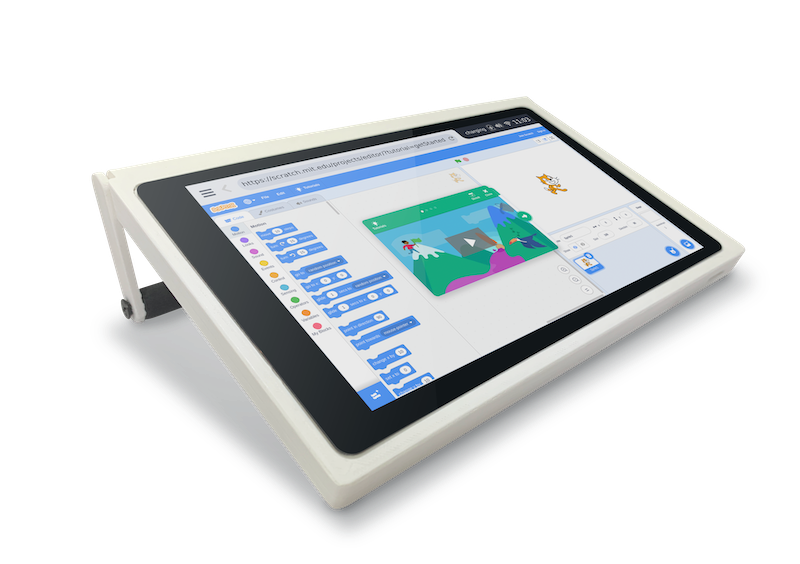 Looking for the best open-source Linux Tablet? Let me introduce you to CutiePi. This open-source portable Raspberry Pi tablet comes courtesy of Japanese expertise. The developers used an RPi compute module (3+) to manufacture a decent tablet that looks and feels like a commercial product.

On top of the module, CutiePi adds several components to turn it into a functional end-user device. These include an 8 inches 1280 x 800 display, several ports, Wifi and Bluetooth 4.0 compatibility, and a 5000mAh battery. With these specs, the battery lasts for a good 5 hours duration which is amazing. There is even six GPIO pin in case you want to attach other hardware.

The tablet itself is very user-friendly and easy to run. Several pre-installed applications (including a web browser) on the interface should get you going in everyday tasks.

What makes CutiePi an intriguing option is that it’s open-source. Everything about it, from custom boards to layout designs and the user interface, is customizable. So, if you love to tinker with hardware and have the knowledge, you can even expand and make your own CutiePi. 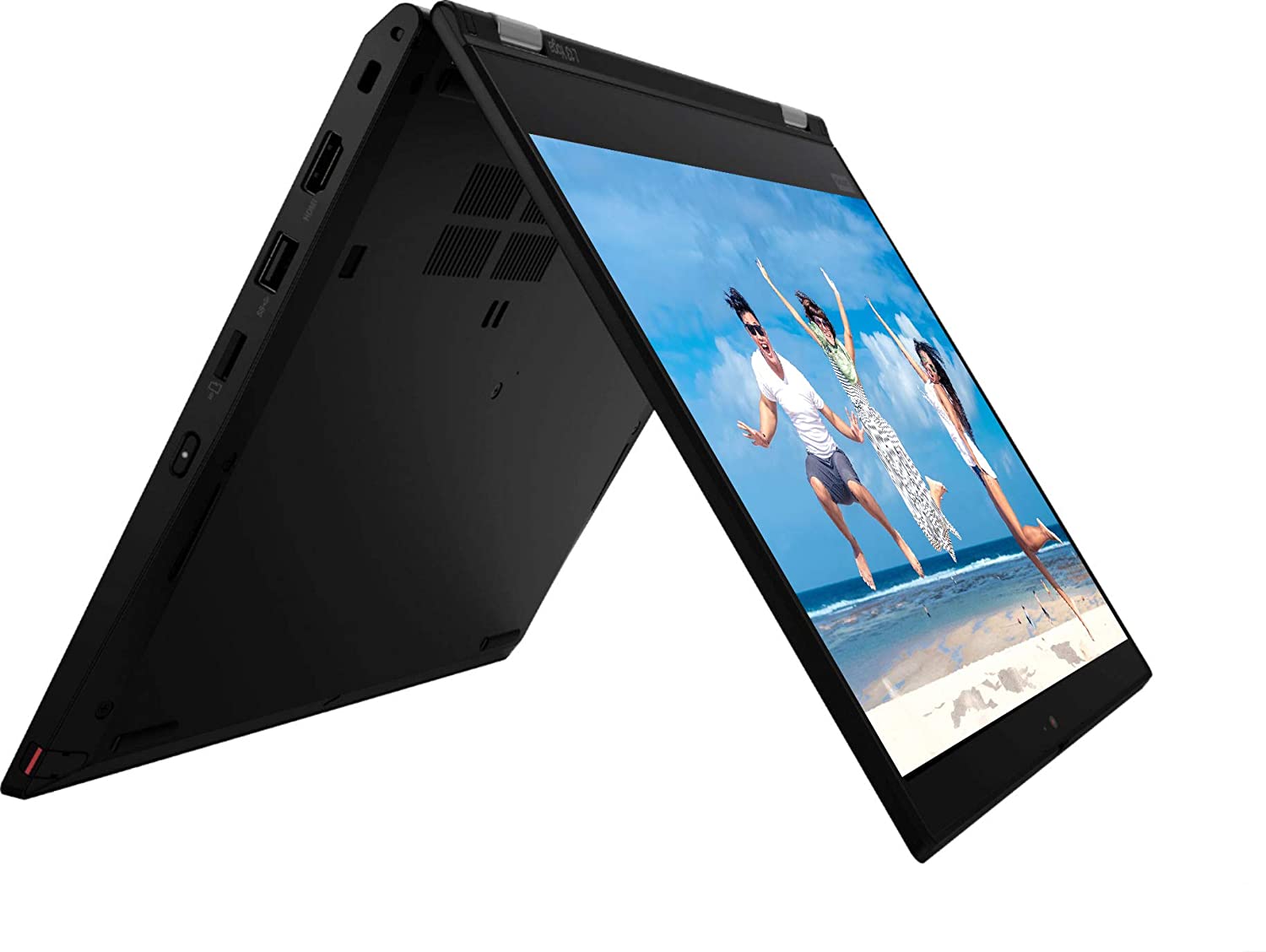 Now, this option is pretty much like Chromebook x360 because it’s a 2 in 1 laptop. Therefore, you can use it as a tablet. However, unlike it, the Lenovo’s laptop isn’t powered by ChromeOS. Instead, it ships with a Windows 10 Home operating system. You will need to replace it with a particular Linux distro of your choice.

As for the hardware, Lenovo doesn’t compromise on the specs. It’s one beast of a machine that comes with a 10th Gen Intel Quad-Core i5 processor, 8GB DDR4 RAM, and 1TB PCIe SSD storage. Moreover, you get a backlit keyboard along with a Delca 16GB Micro SD Card.

Lenovo ThinkPad L13 Yoga has a 13.3 inches touchscreen that supports FHD resolution. That makes it stand out from the other options on this list. On top of that, a full charge lasts for a good 6-8 hours session. So, you can take it anywhere you want on long travels.

If you are using it as a tablet, the only problem is its exorbitant cost. Writing this article costs north of 1000 bucks, which is a lot if you want to use it just like a Linux tablet. 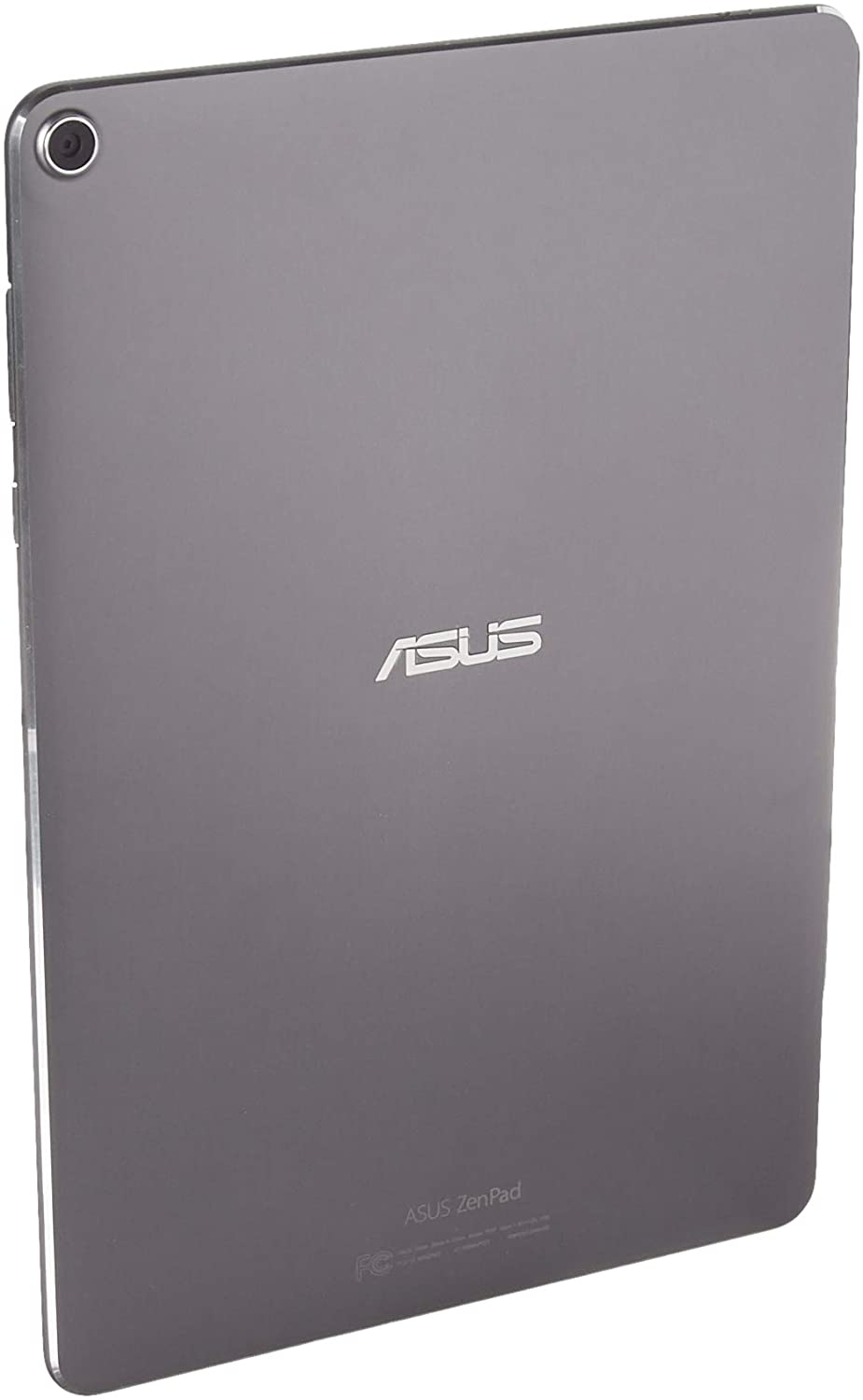 The ZenPad 3S 10 from ASUS is a 9.7 inches tablet that brings excellent 2K visuals in your hands. It’s made for gamers and multitaskers who will definitely appreciate its 6-core processor, 4GB of Ram, and IMG GX6250 graphics card.

The Asus ZenPad has a sharp HD display, and its design is both comfy and modern. The sleek, compact feel makes it very pleasant to hold for longer binge-watch or work sessions. The fingerprint scanner adds an extra layer to the security. The storage is also decent for the price. What’s more, it also has a microSD card slot to increase storage.

The only problem with this option is that it’s a Windows machine, and you cannot install Linux on it in the usual way. However, you can easily utilize a Linux Deploy to have a Linux install running as an application.

That said, the ZenPad 3S 10 is a smart purchase if you are more into visuals and still want an affordable tablet for your Linux sessions. Though it doesn’t come pre-installed with a Linux distro, and it’s not a Chromebook, you can use Linux as an app on this tablet with a little tinkering with the settings.

ingPad A1 is powered by a Linux-based mobile OS: JingOS, which can both run Linux desktop apps and Android apps. JingPad A1 is a flagship tablet built with industry-leading components and specs, it is the world’s first consumer-level Linux tablet for Linux enthusiasts and consumers alike. 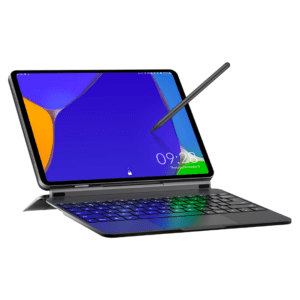 Get into the specifications, JingPad A1 brings an Unisoc Tiger T7510(12nm octa-core chipset with 4x Cortex-A75 cores clocked at 2.0GHz and 4x Cortex-A55 cores clocked at 1.8GHz), 11-inch AMOLED & Multi-Touch display, 8GB LPDDR4 RAM, 256GB UMCP Storage Capacity to the package. It also supports Bluetooth, a touch screen, a built-in battery that can last up to 10 hours of web surfing or watching videos.

The signature feature of JingPad A1 is the 2K 4:3 screen. The display has 2368 x 1728 physical pixels with a pixel density of 266 pixels per inch (PPI). The 4:3 format provides 20% more screen height compared to 16:10 screens. It is especially advantageous for working but also very convenient for entertainment.

With JingPad A1, they also offer JingPad Keyboard and JingPad Pencil – the Stylus. JingPad Keyboard is an 11’’ 6-rows keyboard with a full layout. It has a built-in trackpad that gives you the full laptop experience with JingOS. JingPad Pencil is the first stylus with 4096 pressure levels in the Linux world. JingPad A1 can support you for coding anywhere with a portable, versatile, and powerful device.

Best Linux Tablet – Trying to Install Linux on Your Tablet?

There aren’t many Linux Tablets available in the market. Even the ones that support Linux out of the box are hard to get a hold of. In this scenario, the logical option is to look at 2 in 1 laptop – either Chromebooks or Windows machines. In this section, we hope to fill you in with what you should know before trying to install a Linux distro on your tablet.

Linux doesn’t work on all Tabs

Tablets come in so many different processor and architecture configurations that it’s pretty hard for any Linux distro to support them all. What that means is, your particular Tab may not have Linux distro support. Simply google your model and check for its Linux support. If you cannot find a resource, then you are out of luck.

When you are using a Linux distro on any machine that doesn’t natively support it, you are bound to run into hardware support issues. Sometimes, a configuration will install fine, but you won’t find drivers for your hardware. Other times, you may get the hardware to work, but it will take considerable effort on your part to look for solutions.

While the situation improves with some of the popular Linux graphical systems like Gnome 3 and Unity, Linux’s limited touch support remains a major turnoff. Many touch apps won’t work very well with Linux because the OS isn’t designed for your fingers.

Forget Installing Linux on an iPad

Just in case you don’t know, Apple doesn’t play well with anything open source. They lock their devices pretty tightly. Apple limits user access to do a lot of stuff like flashing the drive. While there are some hacks available online, it’s too much of a headache for a novice. Therefore, if you have an iPad, forget about installing any Linux distro.