(This post contains affiliate links. It is a way for this site to earn advertising fees by advertising or linking to certain products and/or services.)

Hardware wallets are tamper-proof electronic devices whose purpose is to store your cryptographic assets securely. They are the best option for serious and long-term cryptocurrency investors who don’t want to risk losing their hard-earned money because of a malware infection, hack, hard drive failure, or theft.

There are many hardware wallets for Bitcoin to choose from these days, and they offer the same basic functionality but differ in extra features, design, security, and the number of cryptocurrencies they support. We’ve picked three best Bitcoin hardware wallets based on user reviews and our own experience. 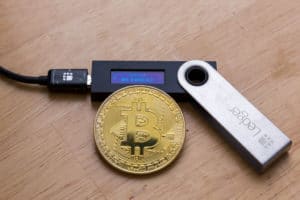 The Ledger Nano S has won the world over with its elegant design, support for a number of cryptocurrencies, including Bitcoin, and outstanding security. The company behind it has been around for a while, successfully demonstrating its commitment to continuous improvement.

During all of this, your private keys are kept isolated and encrypted within a state-of-the-art Secure Element and locked by a PIN code. Should you ever lose or damage your Ledger Nano S hardware wallet, you can effortlessly restore it using a recovery sheet on any compatible Ledger device or wallet. 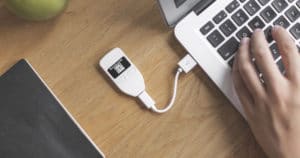 Launched in August 2014, the Trezor wallet established itself as the first Bitcoin hardware wallet in the world, setting an example for others to follow. Measuring 2.4 x 1.2 x 0.2 inches and weighing 0.42 ounce, Trezor may not be as elegant as the Ledger Nano S, but its timeless design and easily readable OLED screen have both held up to this day.

It takes just a few minutes to set up the Trezor wallet, and using it is just as easy. If you lose it, you can recover it to a new Trezor wallet by going to TREZOR Wallet and clicking on the TREZOR recovery button.

Because the Trezor wallet was the first Bitcoin hardware wallet to hit the market, it’s supported by countless Bitcoin businesses, including BitStamp, BitPay, CoinPayments, Bitwala, and others. Soon, the Trezor wallet will also become a password manager, allowing you to securely store all your passwords in a secure offline environment and log in with a press of a button. 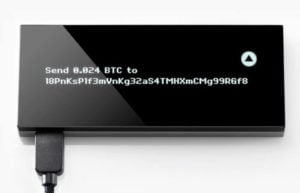 The KeepKey was released in 2015, supporting not only Bitcoin but also Litecoin, Dogecoin, Namecoin, Bitcoin Testnet, Ethereum, and Dash. This polarizing hardware wallet stands out both with its beautiful, large OLED display and also with its rather sizeable dimensions.

Being two times in size than the Ledger Nano S and the Trezor wallet, the KeepKey is hardly convenient. That’s a shame because it otherwise provides the same functionality as the two other hardware wallets, with support for a fewer number of cryptocurrencies.