We are living in the era of the Great GPU Shortage. It’s not just the latest AMD and Nvidia cards that are hard to find. Even the mid-range ones from the previous generation are going out of stock. Plus, finding budget-friendly graphics cards seems like an uphill task these days. Fortunately for you, we have surveyed the market and come up with 5 best graphics cards under 300 (MSRPs).

Thanks to a highly competitive GPU market, there is no dearth of GPU models manufactured by different manufacturers. Each manufacturer adds their own unique twist to their product and fine-tunes their performance. Therefore, expect a slight performance difference when you get Nvidia Quadro P400 (for example) by PSY and the same model by ASUS. That said, let’s take a look at our top picks. 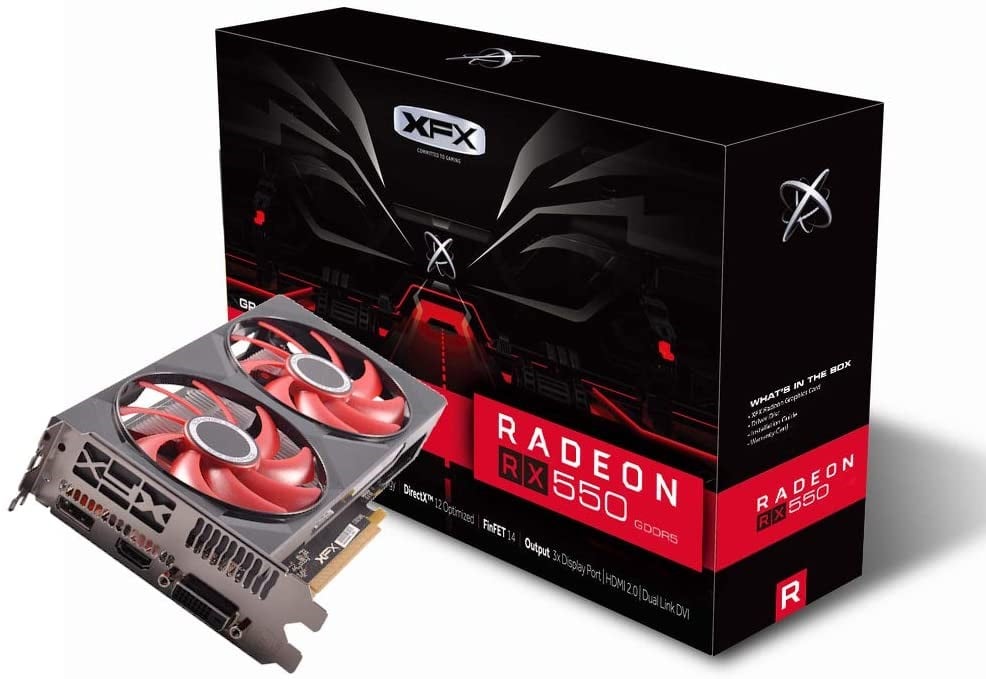 The XFX Radeon RX 550 is a 4GB DDR5 double dissipation graphics card with a memory clock speed of 6GB. A low-profile form factor allows easy installation in the motherboard without the need for any additional wires. The recommended PSU wattage is 350/400 watt which is really low. No need to power it through any external source. The GPU runs cool and quiet through even the most CPU-intensive sessions.
Furthermore, it offers a modern ecosystem for media technologies. The HDMI 2.0 b and DisplayPort 1.4 connections can seamlessly handle 4K resolution and HDR video. The GPU’s capable of HEVC encoding and decoding. You can also connect up to three monitors, thanks to the three DP connections.

While this card can run some modern titles, it’s slightly outdated. Plus, it’s not d3d11 compatible. This means games like Valorant or Fortnite won’t run smooth. Therefore, this tiny graphics card is an intriguing option for a home theater PC and frequent gaming. However, it won’t run modern AAA titles in 4K resolution. 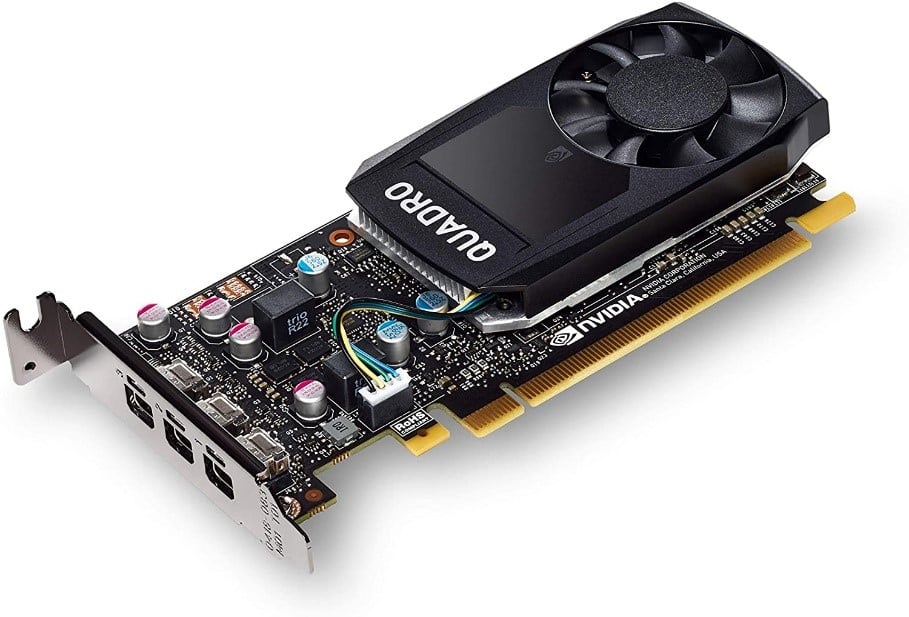 NVIDIA has a strong reputation for releasing GPUs better than its last model. The Quadro P400 based on Pascal architecture is impressive. It drives almost double the visualization performance than the Quadro K420. It’s very powerful for such an economical card. But this is not a gaming level GPU, so don’t expect any performance boost for games.

The NVIDIA Quadro P400 from PNY has a low profile form factor. Even with a single-slot cooling solution, the graphics card measures just 145 mm. No additional wires are needed. The graphic card has a 2GB GDDR5 memory, giving the GPU an operating frequency of 1070 MHz. You can increase this operating frequency up to 1170 MHz when memory is running at 1752 MHz.

Moreover, it features three DisplayPort outputs, providing more display connectivity than the previous generation’s models. The accelerated video is a nice performance boost over the onboard GPU for those that use more video services or live video meetups.

Although the P400 loses a mini-DisplayPort compared to the previous generation, this device’s value is a real win for everyone in the computer-aided design industry. It’s a primary entry-level graphics card for 3D graphics, server, and developer workloads. No ray tracing, though. 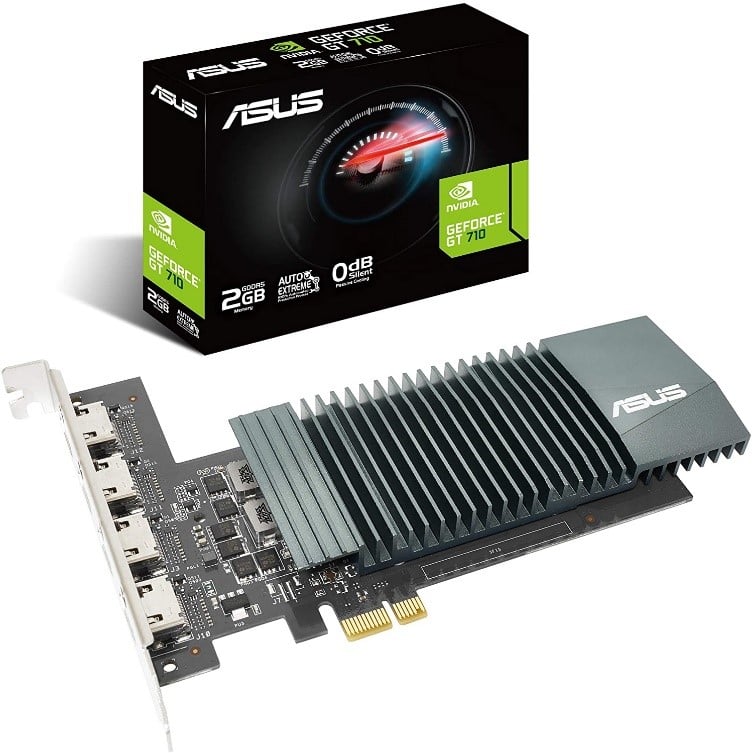 Asus’s seventh variant of the GeForce GT 710 is an excellent graphics card with multi-monitor support. Its design – which separates this specific version from the previous models – accommodates not two (or three) HDMI ports but FOUR. So, you can connect up to 4 4K monitors seamlessly. You can use @60fps on only a single display, though.

The Kepler-powered graphics card is based on the GK208 chip that comes sporting 192 CUDA cores. The card clocks up to 954 MHz. In toe is a 2GB of GDDR5 memory running at 5,012 MHz frequency across a 64-bit memory bus. The GPU has a very user-friendly, single-slot design with passive cooling abilities. Therefore, there is no audible noise at all.

What’s more, this graphics card also comes with modern OSX support. In fact, it is one of the cheapest macOS 10.15 compatible graphics cards available in the market, opening up a new vista of applications in different scenarios.

Overall, the GeForce GT 710 isn’t the type of graphics card you would use to game on. Instead, it’s an affordable option for users looking to upgrade integrated graphics, play with basic servers, simple hackery, VM Pass-throughs, or use multiple monitors simultaneously. 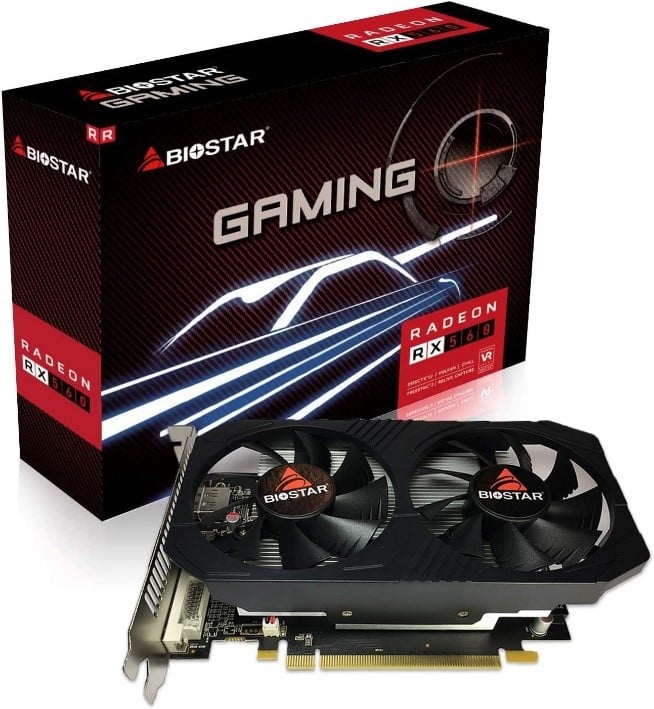 If you are in the market for the best GPU under 300 that plays modern video games, too, then Radeon RX 560 is your guy. It can play games like GTA V, Minecraft, Fortnite, and Borderlands 3 with ease on medium settings.

The BIOSTAR Radeon RX 560 has a base frequency of Up to 1176 MHz (Up to 2.6 TFLOPs performance) and has a 4GB memory size. It supports all the modern rendering formats, including HDMI 4K, 4K H264 Decode & Encode, and H265/HEVC Decode & Encode. It also comes with a DisplayPort 1.4 HDR and Dual Link DVI-D ports for connectivity. You can also connect up to 3 display monitors.

Thanks to the dual cooling fans, temps don’t go beyond 65 degrees Celsius on the CPU or GPU. You can hear the cooling fans running under load, but they remain at a reasonable level. Last but not least, it’s compatible with the older mac book pro machines. It also fares great on Linux. You don’t even need to install the drivers from AMD official website because the Open Source driver provides much better performance.

That said, the Biostar Radeon RX 560 is a great budget card for the casual gamer. But keep in mind it needs at least 600Watts PSU.

The VisionTek’s Radeon 7750 is a cheap 4K solution for your home entertainment center. Not only does it lets you have two displays, but it improves your computer’s power by upgrading the graphics. Beware, though, PCI-E extension cards aren’t always the easiest to work with. If you are a novice, look up a tutorial before ripping up the insides of your PC.

This card can put out a 4K 60Hz image to a 65 inches 4K TV. Now, a few things we noticed about this model. First, you need the right cable to get that resolution. Make sure you purchase or already own a similarly capable 4K 60Hz DP 1.4 and/or HDMI 2.0 compatible cable to get the job done.

Second, as this is an AMD chipset, their driver setup can be a chore sometimes. You will have to download the newest version from AMD. Next, you will need to figure out how to create a CUSTOM RESOLUTION and specify 3840 x 2160 @ 60hz resolution. This is the only way to push it to 60hz.

We have only one complaint, though. The fan on this card has a pretty disturbing whirr to it. Even when the case is closed, you can still hear the whizzing sound.

This section offers information you need to purchase your ideal GPU within your budget. Read on!

Of course, the biggest question is this: What’s better, Nvidia or AMD? While both are churning out some great models, AMD outperforms Nvidia in performance per dollar spent. It focuses more on the raw gaming performance of a card. Nvidia, on the other hand, adds extra features to make their cards more versatile. Its graphics cards have superior video encoders along with ray tracing for better in-game immersion.

Though both of these terms refer to the number of images, they’re totally different things. Refresh rate refers to images on a hardware level, i.e., monitor. In contrast, frame rate determines images on a software level, i.e., by the application itself. For example, a game can support 200+ fps. But you won’t be able to enjoy that glory if you are playing it on a 30 Hz refresh rate monitor. Some of the cards on this write-up, such as Radeon RX 560 and RX 550, can push past 120 in modern games.

Even the best GPU under 300 won’t offer Ray Tracing. Unfortunately, due to the pandemic, there is a severe shortage of GPUs. Due to which their prices have skyrocketed. Therefore, if your budget is $300, don’t expect ray tracing or playing games past 1080p. Besides, don’t be surprised if you have to lower the settings to maintain that coveted 60fps refresh rate.

If you have a standard mini, micro, or ATX computer case, don’t worry about the GPU dimensions. Most cards will fit with ease. You will also have two or more extra slots. However, if you are using a slim desktop PC or a prebuilt one from Dell (or any other company), you may not be able to fit a full-sized GPU. In that case, you will need a low-profile GPU.

Make sure your card has as many video ports as possible. This will ensure maximum connectivity. Most older cards have a VGA port. Newer ones have DVI-D, HDMI, and a DisplayPort to use with a monitor. Some cards also use a USB-C port for virtual link connections with VR headsets.

And that’s pretty much all the info you need on the best GPU under 300. As of writing this article, the GPU market is under stress. Therefore finding a good budget GPU is like finding a needle in the haystack. We hope everything you learned here sticks with you to make an informed purchase in the future.