Chromebooks have been making a name for themselves across digital art communities for a while now, steadily siphoning customers from the Apple ecosystem. But simply running Chrome OS does not a beautiful canvas make.

The last thing you want is to pick up any old Chromebook laptop only to realize the hardware doesn’t support your digital discipline or that it simply doesn’t gel well with your creative methods.

So, to save you wasting your time, money, and effort, I dedicated the last few weeks to researching the best Chromebooks for artists of all kinds, and I’m finally ready to share my findings with you.

Reviews of Chromebooks for Artists

Weighing little over 2lbs, the Pixelbook Go is the perfect little canvas to take with you when you hit the coffee shop or on a day trip to a beauty spot to sketch some natural scenes.

At 13.3”, the 1080p display is neither artistically limiting nor so big as to be unwieldy, and best of all, it’s touch-sensitive, so you can draw directly onto your drawing/painting app of choice.

Under the hood, you get 16GB of RAM to play with, which is more than enough to iron out lag, ensuring the Pixelbook flows with your creativity rather than against it.

I’d prefer 512GB, but the 256GB storage has you covered for about a year’s worth of artwork. Besides, that’s a small price to pay for a Chromebook with an i7 CPU at the helm, capable of taking your art into uncharted territories.

Due to their dimensions, Chromebooks typically have a 1080p native resolution, but Samsung has gone above and beyond with their Galaxy Chromebook, fitting it with a 4K AMOLED touchscreen. Needless to say, it’s perfect for creating luscious, hyper-detailed artworks.

Better still, the Galaxy comes with its own stylus designed from the ground up to enhance the usability and interactivity of its immaculate display.

The 256GB SSD should keep you going for a while, and the hyperthreaded, quad-core i5 processor offers enough silicone muscle to support multiple art programs simultaneously.

It comes with 8GB of RAM, so you can enjoy super accurate, low latency digitization that has no problems keeping up with your creativity, making it great for those working to deadlines, like tattoo and concept artists.

The Acer Spin is a 2-in-1 Chromebook, meaning it can be used as a tablet or as a full-blown laptop, whichever format is best for the task at hand. The ability to flip the keypad out of the way and use the tablet as a canvas makes for a much more comfortable drawing experience, and that will no doubt translate into your art.

With 8GB of RAM and an impressive 10th generation, hyperthreaded, i5 processor, it’s capable of supporting parallelizing workflows without breaking a sweat, but you will have to supplement the 128GB SSD with an external hard drive.

The 2256 x 1504 resolution is lovely and crisp, a definite boon for the artists with an eye for intricate detail. It measures 13.5” altogether, which strikes a healthy balance between screen real estate and portability, although, at 4lbs, it’s a little on the heavy side.

It’s also a touchscreen display, but unfortunately, it doesn’t come with its own stylus, so you’ll have to shop around for a compatible aftermarket substitute. 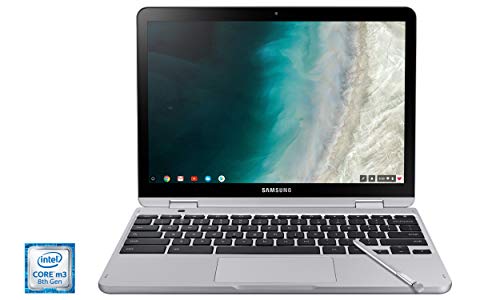 If you liked the idea of the comfortable drawing experience a 2-in-1 Chromebook can bring to the table, but you want an integrated stylus, the Samsung Plus V2 is the one for you.

The specs aren’t quite as beefy as some others on the list, but the 12.2”, 1900 x 1200, touchscreen display is a joy to work with, especially as you can flip that irksome keypad out the way.

Featuring 4GB RAM, it has enough oomph to run any illustration or painting software in the Chrome OS system, but if you overload it with heavy multitasking, you may experience some lag.

It’s the Intel M3 CPU at the helm here, which isn’t bad for 2-D applications, and it’s super energy efficient, which is why the battery on the V2 lasts for 10 hours.

As for storage facilities, it comes with a 64GB eMMC drive, which isn’t as capable of shouldering large files as SSD, but it’s actually faster when loading small files, so it’s a pretty great choice for artists.

The X360 is another convertible Chromebook, so you can get the keypad out of the way and use the tablet format as a more traditional drawing or painting surface.

Much like the Samsung Plus V2, it has an eMMC drive capable of reading and writing small files even more efficiently than SSD, but unfortunately, it tops out at 32GB, so you’ll need to pair this purchase with a separate hard drive.

It has 4GB of RAM, which is perfectly fine for most digital art software, but it can get a little laggy if you overwhelm it with multiple applications, especially as it only has a dual-core processor.

At 14”, the touchscreen display is nice and large, offering a sense of freedom during a sketch, but the resolution isn’t up to all that much, which, if I’m being honest, lets the side down a bit. However, it’s still a fantastic Chromebook for the burgeoning artist on a budget. 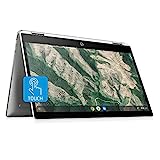 As an artist, you probably already know of certain things you should be looking for in your Chromebook…a high-res display, for instance.

But computers are deep devices with lots of co-dependent features, so it’s easy to forget about or underestimate some of them, which is why I composed this buyer’s guide.

Let’s start with the obvious stuff. Digital artwork requires clarity, and clarity is determined by the pixel count (or resolution) of a display. As a rule, you should never settle for anything less than a 1080p resolution.

You’ll also need something practically oozing with deep, rich, accurate colors, so keep an eye out for 99% sRGB color space coverage and as much Adobe RGB space coverage as possible. Some sort of integrated color calibration software will also be a huge bonus.

Unless you’re going to be hooking your Chromebook up to a discrete drawing tablet, you should opt for a touchscreen. It feels far more natural to draw on a single surface than to draw on one and have the line appear on another.

The CPU is the workhorse at the core of all your Chromebook’s functionality. The beefier it is, the more your laptop will be able to support.

A weak CPU will only lead to terrible things like a laggy performance, crashes, and ultimately, wasted inspiration.

On the Intel side of things, you should be aiming for i5 and above, and for team AMD, a Ryzen 5 or above.

Don’t worry about GPUs. Most Chromebooks come with integrated graphics facilities, and they’re practically guaranteed to support 2D digital artwork. You’ll only need to direct some extra funds this way if you plan on doing any video editing or 3D modeling.

RAM is a computer’s fast-access memory. It helps to speed up general system performance. Visual art software usually requires quite a bit of RAM to support the editorial features and the layered nature of digitized art.

Go with 4GB at the very least, but for a truly lag-free performance, it’s better to choose a Chromebook with 16GB RAM.

The storage facilities of your Chromebook are where all the important, permanent bits and bobs go — we’re talking program files, music files, visual files…anything that you’ve got saved on your computer for recollection at a later date.

As you’re going to be churning out masterpiece after masterpiece, you’ll need a Chromebook with a fairly decent capacity. 512GB – 1TB will be perfect, but 256GB isn’t exactly a dealbreaker. It’s just that you may eventually have to invest in an external hard drive.

One of the best things about Chromebooks is their compact, lightweight design. You can take it on the road with you and whip it out whenever inspiration strikes.

However, you’ll also need a large display, so finding a balance between display dimensions and portability is key.

I know you’re dying to digitize some artwork, but while you’re still here, let’s run over some relevant FAQs.

Are Chromebooks good for artists?

Most Chromebooks are pretty great for artists due to their convenient size, touchscreens, and wide software support, but the ones on this list make particularly excellent tools for the digital artist.

Do Drawing Tablets Work On Chromebooks?

Yes, as long as the devices share compatible I/O ports you can hook a drawing tablet up to a Chromebook, but tablet functionality will be limited as they’re usually only made to support Windows and Mac operating systems.

Can I Use Adobe Illustrator On A Chromebook?

Unfortunately, Adobe Illustrator will not run on Chrome OS, but there are some amazing alternatives such as Gravit Designer, and Sketchbook by AutoDesk, which is widely considered the best drawing app for creative industry professionals.

Do Chromebooks Come With A Stylus?

A built-in stylus is becoming a popular design feature, but there are still plenty of Chromebooks out there that still don’t come with one.

What’s The Difference Between A Chromebook And Any Other Laptop?

There you have it, all you Picassos and Kahlos out there. With one of these dynamite Chromebooks in your bag, you can introduce your artwork to the digital realm with style.

The Google Pixelbook Go wins the top spot by a country mile and should be the Chromebook of choice for serious and professional artists. The only thing that even comes close to the Pixelbook is the Galaxy, with its amazing 4K display.

If you’re still finding your feet as an artist, or perhaps you’re new to digitization, I’d recommend one of my 2-in-1 featured Chromebooks like the Acer Spin, as drawing on a tablet feels a lot more natural and easy. You can then upgrade as and when you feel you’re ready.