`read` command is used to take user input in a bash script. We can take input in bash script by using various types of options with the read command. Sometimes we need to write the script in such a way that the script will run until a specific key is pressed or the particular script will execute based on the specific key or the program will wait for the specific amount of time until any key is pressed. How you can write bash script to wait for any particular key or any key to some tasks is shown in this tutorial by using different examples.

Create a bash file with the following script. When you will run the script, it will continue until the user presses any key. The script will wait for the user’s input in every 3 seconds and if the user doesn’t press any key then it will print the message, “waiting for the keypress“.

Create a bash file with the following script. An infinite while loop is used in this example that will terminate when the user will press ‘q’. If the user presses any key without ‘q’ then the value of the counter variable will be increased by 1 and print the value.

Create a bash file with the following script. The script will terminate when the user will press ESC key. This script will print the keys pressed by the user until ESC key is pressed.

Create a bash file with the following code that will wait for ENTER key to terminate the script. The script will take a server name as input and will try to ping the server in every 2 seconds. If ping command gets the response from the server then it will terminate the script by displaying the output otherwise it will wait for the user’s response or ENTER key by printing the message, “Trying to connect with…”. 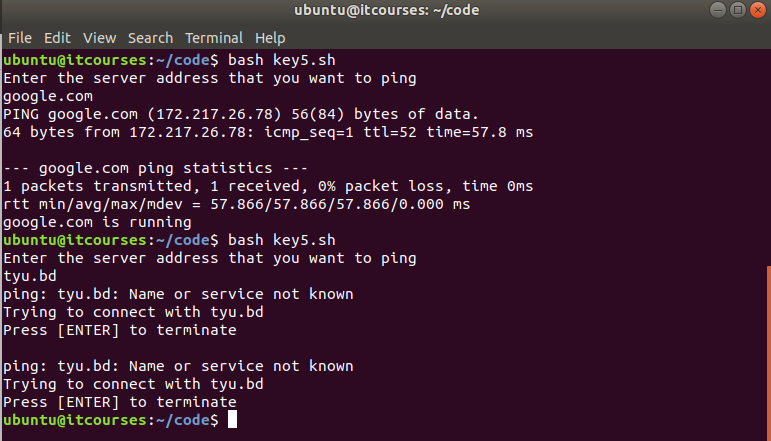 This tutorial shows how you can write the bash script in various ways that will wait for the user’s input to do any specific task or terminate the script. Hope, after practicing the above examples, you will be able to write the script in such way that can wait for any keypress and do the particular task based on the key pressed by the user.