A built-in bash command that is used to execute a command when the shell receives any signal is called `trap`. When any event occurs then bash sends the notification by any signal. Many signals are available in bash. The most common signal of bash is SIGINT (Signal Interrupt). When the user presses CTRL+C to interrupt any process from the terminal then this signal is sent to notify the system.  How you can use trap command to handle different types of signals is explained in this tutorial.

Trap command without any option and arg

Run the following command from the terminal to display the list of all signal names with number.

The output of the above command will show the list of 64 signals with numbers.

The following output will appear after running the above commands.

Now, if the user opens the terminal again after exit and executes `ls` command then temp.txt file will not exist.

The signal number of SIGUP, SIGQUIT and SIGKILL are 1, 3 and 9. The following first command will set a trap for these three signals. When any of these signal will occur then the message “Trap command is executed” will print.  Run the following command from the terminal.

When the user will press Ctrl+C to generate the signal assign by `trap` command then the `echo` command of trap command will execute and the following output will appear.

Set `trap` command for SIGTERM in a script

SIGTERM signal is used to terminate the process immediately by releasing its resources. Create a bash file named ‘trapscript.sh’ with the following code. An infinite for loop is declared in the script that will print a text continuously until SIGTERM signal occurs. The user has to press Ctrl+Z to generate SIGTERM signal.

# Set a trap for SIGINT and SIGTERM signals
trap "echo The program is terminated." SIGTERM SIGINT

#Initialize counter variable, i
i=1

#declare infinite for loop
for(;;)
do
#Print message with counter i
echo “running the loop for $i times”
#Increment the counter by one
((i++))
done

Run the script by executing the following command and press Ctrl+Z to generate SIGTERM signal. The following similar output will appear.

You can associate a `trap` command with any user-defined function. Create a bash named trapfunc.sh and add the following script. Here, a custom function named func() is declared to print a simple message, “Task completed”. A for-in loop is defined to read and print the list of all files and folders of the current working directory. `trap` command that is defined in the beginning of the list will call the function, func() when the program terminates.

Run the script from the terminal.

The following output shows that, “Task completed” text is printed after printing all files and folders of the current directory. 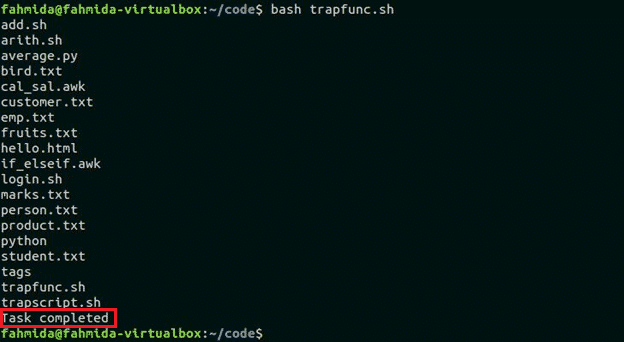 This tutorial shows how `trap` command can be used in Linux to do any automated task based on generated signal. It helps users to trace different types of errors and take proper action that can be assigned before by using this command. Many programs or scripts allocate some particular resources when running in the system. If any running program or script exit or terminate abnormally then the resources used by that program are blocked. `trap` command can be used to solve this issue. Resource cleaning task can be done easily by using this command. Hope, the reader will get a clear idea of the uses of this command after reading this tutorial.