Select command is used in scripts for menu creation. Different types of menu generation tasks can be implemented with the select command such as: creating menu based director list, creating a menu from file content etc. How you can implement these types of tasks using bash select command are shown in this Linux Hint tutorial.

Create a bash file named select1.sh with the following bash script. Here, ‘select’ command will retrieve each data from the list and print the data as a menu. The following script contains the brand names of mobile phones and after executing the script it will create a menu of mobile brands and ask the user to choose any brand. It will print the name of the selected brand.  The user has to press Ctrl+c to terminate from the script.

The following output will appear after running the script and selecting the menu item number 1 and 4.

The different output will appear for different selection. Here, 1 is selected the first time that is Ubuntu. it matched with first case value print the message “I also use Ubuntu”. 4 is selected next time and the menu item is Windows7 but there is no case value with this name. So, this time it printed “Invalid entry” and terminate from the script. 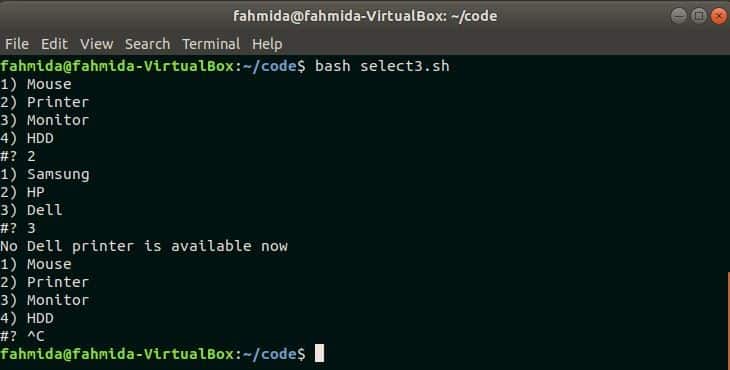 Example-4: Create a bash menu with an array

An array variable can store multiple data. So, you can use an array as a data list for creating a base menu. How you can use an array with a select statement to create a menu is shown in this example. Create a bash file named select4.sh with the following bash script. Bash subroutine is used in this script to create a menu from the array. An array with three elements is used and menu_from_array () is called to create the menu. The script will check the selected menu item number is between 1-3 or not. If the number is not within this range then it will instruct the user select it within this range, it will print select menu item with other text.

# Call the subroutine to create the menu
menu_from_array "${linux[@]}"

To understand this code we should learn a few tricks 😉

Bash menu creation task by using a select statement is explained in this tutorial as simple as possible. There are many simple and fancy ways to use SELECT in bash when creating menus and we hope these examples give you a starting point to create your own combinations.