A “for” loop is a fundamental part of almost every programming language. It helps write the code you want to be repeated in the desired number of times. For Linux-based systems, Bash also features dedicated syntax that enables its users to leverage loops for automating their day-to-day tasks through scripts.

Before we explore the scenarios, let’s create our Bash file, which will contain our Bash script. Simply navigate to your desired directory in the terminal and create a file using the “nano” or “touch” command.

For this guide, I will create a “test.sh” file in my “Documents” directory.

This will open your Bash file using the nano text editor. 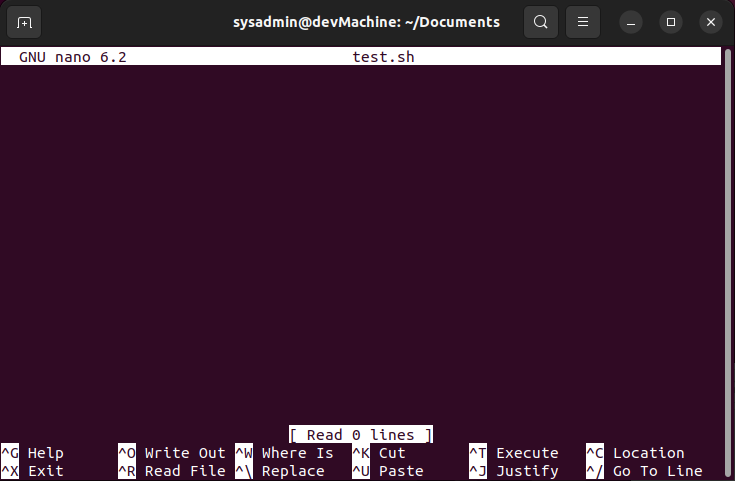 Here, you can start writing the code that you want in your script file. Let’s start by exploring the scenarios.

Using the “for” Loop To Display the Contents of an Array

With your Bash file opened up in the editor, we can start adding code to it. To specify that this is a Bash file, you need to indicate the following:

First, we need to define an array and assign five values to it. Let’s assign the names John, Jane, Jim, Jack, and Janis.

Now comes the fun part; we need to set up the for loop, which using the iterator “i” will iterate through the array’s contents and perform the display function. You can do it as such:

In Bash scripting, the syntax dictates that we specify our function within the “do” and “done” keywords. So, as we are trying to display the contents of the array, we will type it out as shown below:

This will go through all the contents of the array and display them one by one. Now, our script looks like this:

Press “Ctrl+O” to save the contents of this script file and “Ctrl+X” to exit from the nano editor.

With all the code in place, you might wonder how you can execute this code to see the output. In your terminal, type:

Here, you can see the names displayed as we have defined them.

This scenario works well in cases where we get the output of a specific scenario in an array, and we have to output the contents of the array for future reference or another calculation.

So, let’s take the code that we’ve written in the previous scenario and modify it. Instead of printing each entry in the array one by one, we need to write it out in a text file. Open up your script file using:

Now, as we have the array named “writers”, we will be writing them out to a file named “writers.txt” using the >> symbols. So your code should look like this: 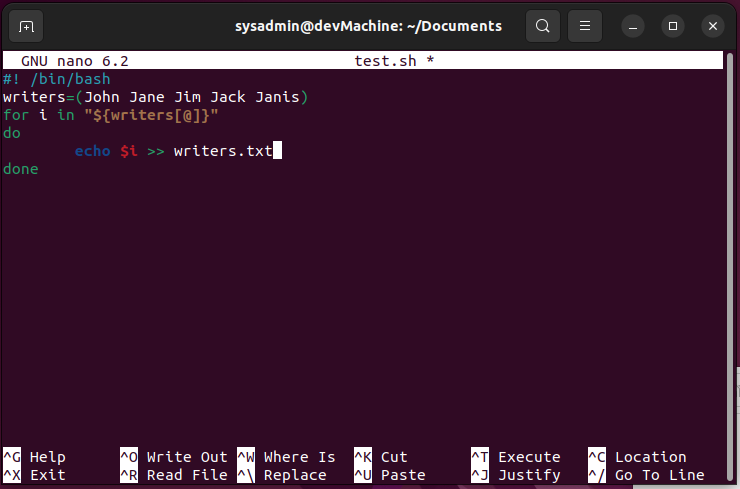 Save and exit from the file to run the script.

Similar to the previous scenario, you can run the updated script using:

This time when you run the code, you will see that there will be no output in the terminal. This is because the code is outputting everything to the text file. A text file would have been created in the same directory.

Upon opening the file (you can just double-click on the file to open it), you will see that the names have been added to the file:

We will use the same Bash script for this scenario and extend it further.

The main structure of our code will remain the same, and we will need to update the contents of the loop code. Using the same script, we will see if our provided name matches with any of the names in the array; if it does, we will greet them. For the other names of the array, it will just display them.

Now, we’d want to update the code between the do and done keywords to the following:

This code will check at the time of execution if any of the names in the array match “Janis”, then display “Hi Janis”. Otherwise, just display the names. Your code should look like this: 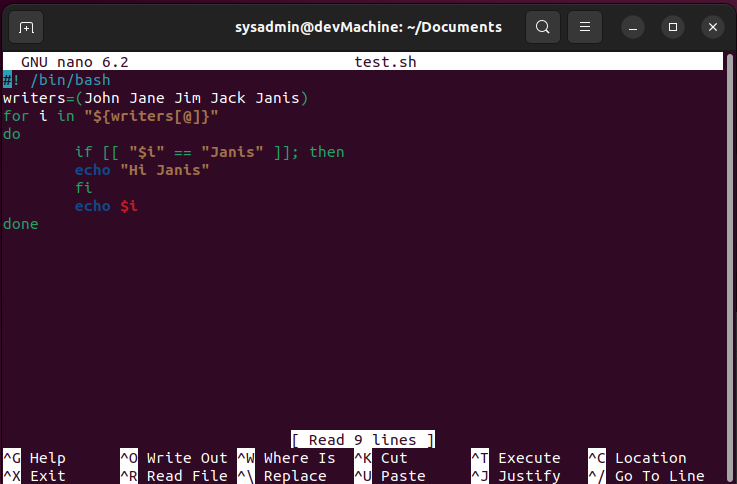 In order to be able to run this code, you need to save the file and exit from the text editor.

When you are back in the terminal, you can use the same to execute your modified Bash script:

These three are very primitive examples of using the “for” loop in your Bash scripts. As you continue learning more about what these scripts can do, you’ll see that this loop comes in very handy and can be utilized in very complex codes. To better understand scripting and use it in your day-to-day operations, you need to understand these basic components of the code and what the syntax does.

If you run into any issues with any of these scenarios or want to learn more about loops or Bash scripting, feel free to engage us through the comments section, and we’ll be glad to help you out. Cheers.