for loop can be used by two ways in bash. One way is ‘for-in’ and another way is the c-style syntax. Both syntaxes are shown below.

List of predefined strings or array can be read easily by using ‘for’ loop which is shown in the previous tutorial of for loop. How the content of an input variable can be read by using ‘for’ loop is shown in this example. Create a file named ‘forloop1.sh’ with the following script. An input value of a text of multiple words will be taken after running the script. Here, for loop is used to split the text into words based on white space and print each word with the position.

Here, a text of 5 words is taken, so five lines of output are printed.

Example-2: For loop with a break statement

‘break’ statement is used inside ‘for’ loop to terminate from the loop. Create a file named ‘forloop2.sh’ with the following code. ‘for’ loop is used here to read a  list of four person’s. Two conditions are tested here. If the person name is ‘Amir’ and the color is ‘Blue’ then the loop will terminate after printing the person’s name and color. The color values of the second for loop will be printed until the color value, ‘Blue’ is matched.

The following output will appear after running the script. First, two colors, ‘Red’ and ‘Green’ are printed. When ‘Blue’ value appeared then it printed the person’s name and color value and terminated from the loop for the ‘break’ statement.

Example-3: For loop with continue statement

‘continue’ statement is used inside the ‘for’ loop to skip any statement based on a particular condition. Create a file named ‘forloop3.sh’ with the following script. Here, a variable named $courses is used to assign a text value. ‘for’ loop is used to read the variable, $courses. The text value will be split-ted based on the space and read by the ‘for’ loop. When the value, ‘Oracle’ is matched with $course then it will print ‘Oracle is not available now’. For other values, ‘The class of $course is running’. The course that is not available will not execute the last statement of the ‘for’ loop for the continue statement.

courses="Java PHP Oracle VB.net"
for course in $courses
do
if [ $course == 'Oracle' ]
then
echo "$course is not available now"
continue
fi
echo "The class of $course is running"
done

Any bash command output can be used in the ‘for’ loop by using backtick(`). Create a file named ‘forloop4.sh’ with the following script. Here, `ls *.txt` command is used in the loop. This command will generate a list of the text file from the current directory. ‘for’ loop will iterate each filename from the command output and store it in the variable $filename that will print later. Here, $n variable is used to display the file number.

Example-5: For loop to read a range

‘for’ loop can be used for reading range of data. The following example read a range of character and search each character is exist in the text or not. Create a file named ‘forloop5.sh’ and add the following script. Here, the range, [A-Z] is used in ‘for’ loop. That means ‘for’ loop will iterate for 26 times for each capital letter. Each character is searched in $text by using ‘awk’ command. If any character found then it will store the value in $result. Next. $result is checked for any content. If it is not empty then a message will print.

Here, the alphabets, ‘B’, ‘L’ and ‘S’ found in the text, “Bash Scripting Language”. So, three lines of output are printed.

Example-6: For loop to read a range with the increment

The example shows how you can use ‘for’ loop to find out all even numbers within a particular range. Create a file named ‘forloop6.sh’ and add the following script. Here, a range of [2-20] is used in the loop where each step is incremented by 2. The loop will iterate for 10 times and print the number in each step.

All the even numbers within 2-20 are printed after running the script.

Example-7: For loop to work with file

This example shows how you can ‘for’ loop to read a list of specific file. Create a file named, ‘forloop7.sh’ and add the following script. Here, the loop is used to the list of all text files from the current directory and replace the file extension from ‘.txt’ to ‘.doc’.

echo "Replacing the file extension of all text file to doc file."
for filename in *.txt; do
mv "$filename" "${filename%.txt}.doc"
done
echo "Replacement is done successfully"

Create a text file first if no text file exists in the current directory. Here, a text file named ‘newfile.txt’ is created by using `cat` command.

Run the script mentioned above.

Next, check the extension is changed or not by using `ls` command.

Example-8: For loop with sequence command

The following example shows how you can use ‘seq‘ in ‘for’ loop to print a list of sequential number. ‘seq’ command works similarly like the range with increment. Create a file named ‘forloop8.sh’ and add the following script. The loop will print the numbers between 1 to 30 by omitting three number each step.

The infinite loop can be used to do any repetitive tasks many times until a specific condition appears. Create a file named ‘forloop9.sh’ with the following script to check the use of the infinite loop. Here, no termination condition is defined in the loop. The loop displays the menu of 5 lists until the number 5 is pressed. It will print a particular message for other numbers from 1 to 4 and display the menu again.

Here, 9 is pressed the first time that does not exist in the list. For this input, it is printed “Wrong selection” and display the menu again. Next, 1 is pressed and it displayed a message, “Successfully completed”. Next, 5 is pressed to terminate from the program. 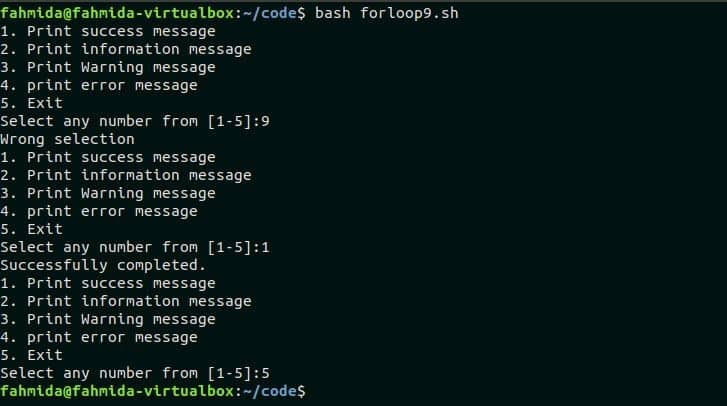 ‘for’ loop can be used without any list or array or command output. How you can use  ‘for’ loop to read command line arguments is shown in this example. Create a file named, ‘forloop10.sh’ and add the following script. The loop will iterate based on the number of command line arguments. $counter variable is used to find each step of the loop that is incremented by 1 in each step.

Example-11: Reading files and directories by using for loop

‘for’ loop can be used to print the list of files and folders of the current directory. Create a file named ‘forloop11.sh’ and add the following script. Here, ‘*’ symbol is used in the ‘for’ loop to read the files and folders of the current directory. The loop read each file or folder name in each step and print it in the terminal with a ‘tab’ space.

printf "Pinting the files and folders of the current Directory...\n\n"
for list in *
do
printf "$list\t"
done
printf "\n\nDone\n"

File and folder names of the current working directory are printed after running the script.

Example-12: Using a comma in the bash C-style for loop

Many effective uses of ‘for’ loop is tried to explain in this tutorial. After practicing the above examples, hope the readers will get clear knowledge about ‘for’ loop and 0able to use this loop properly in the bash script.