Different types of bash commands need to be run from the terminal based on the user’s requirements. When the user runs any command from the terminal then it shows the output if no error exists otherwise it shows the error message. Sometimes, the output of the command needs to be stored in a variable for future use. Shell command substitution feature of bash can be used for this purpose. How you can store different types of shell commands into the variable using this feature is shown in this tutorial.

***Note: Don’t use any space before and after the equal sign when using the above commands.

Single command output to a variable

Bash commands can be used without any option and argument for those commands where these parts are optional. The following two examples show the uses of simple command substitution.

bash `date` command is used to show the current date and time. The following script will store the output of `date` command into $current_date variable by using command substitution.

`pwd` command shows the path of the current working directory. The following script stores the output of `pwd` command into the variable, $current_dir and the value of this variable is printed by using `echo` command.

Command with option and argument

Bash `wc` command is used to count the total number of lines, words, and characters of any file. This command uses -c, -w and -l as option and filename as the argument to generate the output. Create a text file named fruits.txt with the following data to test the next script.
fruits.txt

Run the following commands to count and store the total number of words in the fruits.txt file into a variable, $count_words and print the value by using `echo` command.

`cut` is another bash command that uses option and argument to generate the output. Create a text file named weekday.txt with seven-weekday names to run the next script.

Create a bash file named cmdsub1.sh with the following script.  In this script, while loop is used to read the content of weekday.txt file line by line and read the first three characters of each line by using `cut` command. After cutting, the string value is stored in the variable $day. Next, If the statement is used to check the value of $day is ‘Sun’ or not. The output will print ‘Sunday is the holiday‘ when if the condition is true otherwise it will print the value of $day.

You can store the output of command substitution into any loop variable which is shown in the next example.

Create a file named cmdsub2.sh with the following code. Here, `ls -d */` command is used to retrieve all directory list from the current directory. For loop is used here to read each directory from the output and store it in the variable $dirname which is printed later. 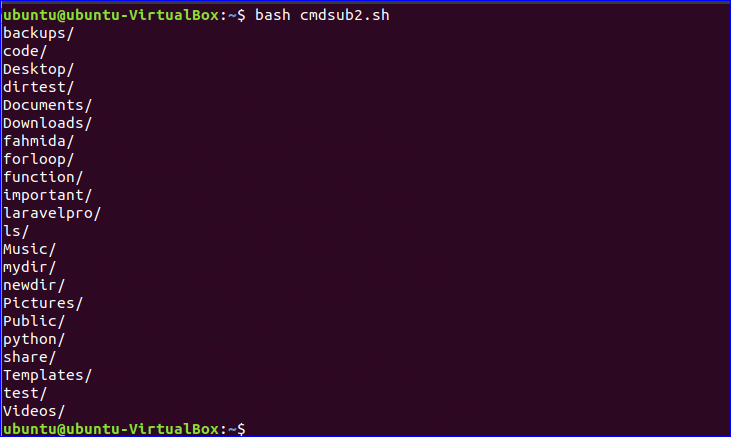 `whoami` command shows the username of the currently logged in user. By default, this command is stored in /usr/bin/ folder. Run the following script to run `whoami` command using path and store in the variable, $output, and print the value of $output.

Run the script with the following argument value.

Here, the basename of the path, Desktop/temp/hello.txt is ‘hello.txt’. So, the value of the $filename will be hello.txt.

Various uses of command substitutions are shown in this tutorial. If you need to work with multiple commands or depended commands and store the result temporary to do some other tasks later then you can use this feature in your script to get the output.

More info in the video: