How to use bash aliases

Most of the users like to use shortcuts for running commands. There are many commands in Ubuntu that we need to use regularly. It will be very helpful for us if we are able to run those common commands by typing shortcut commands. Using bash aliases, Ubuntu users can easily create shortcut commands of the large commands those are used frequently. Bash aliases not only makes task easier but also save the time of the users. The user can declare alias temporary or permanently. The temporary aliases can be used as long as the session of the user exists. If the user wants to use shortcut commands every time the session starts then he or she has to create permanent alias by using ~/.bashrc and ~/.bash_profile files. How you can create and use bash aliases in Ubuntu is shown in this tutorial by using some examples.

Test the shortcut of ls -ls

After creating alias, the output of “L” and “ls -la” commands will be same.

If the user close the session and again start new session then alias command will not work.

To solve the above problem you can create permanent alias command. Suppose you want to create a shortcut of “mkdir” command with alias name “C” and use it permanently. Open ~/.bashrc file in any editor, add alias command in that file, save the file and run command to re-execute the file with added alias command.

Open the file in nano editor.

Add the alias command in the file and save it. 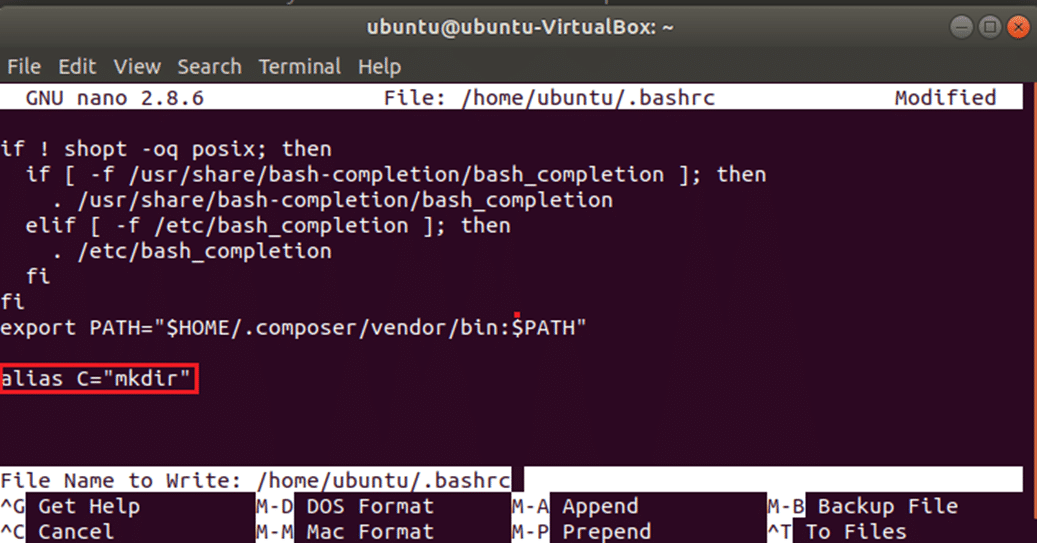 Re-execute the file to make the command active.

Test the shortcut command of “mkdir”

Check the command is working or not.

Remove or comment the line that is used for creating alias command from ~/.bashrc file and re-execute it for deleting permanent alias.