Are you about to begin with Bash programming? Then, this article is for you. Bash, actually, is a Unix shell developed by Brian Fox. In command-line interface (CLI) programs, commands are processed as lines of text. The interface itself is called a command-line processor or command-line interpreter or more popularly, a shell.

If you’re a complete code newbie, this guide might help you understand how code is written. Initially, you’ll write simple programs to get comfortable with the programming language and to know the syntaxes and tools available to perform a certain task. If you’re somehow familiar with Bash, then your learning process will be easier.

In Bash, you mostly use Linux commands. The syntax is Bash. We’ll discuss Bash, but before that here’s is a quick overview of the shell.

What Exactly is Shell?

A shell is a program that receives commands and gives them to the OS for performing tasks. In other words, it interprets the commands given by the programmer. After results are returned, the shell shows it in the terminal. So, through the terminal window, you interact with the shell.

Bash is the shortened word of Bourne Again Shell. So, Bash programs can be called Shell programs. Bash shell was built upon the original Unix shell, sh, created by Steven Bourne. Apart from Bash, other frequently used shell programs for Linux systems include csh, zsh, ksh, and tcsh.

Bash is for lazy coders. Through Bash, you can issue commands in a simple and straightforward manner. A Bash program acts as an efficient tool to save your time and effort while writing programs. You can use simple programs to perform a long chain of tasks.

Bash can be used in a variety of ways, such as running customizing admin tasks, performing task automation, running a shell command, executing multiple commands, and a lot more. Hence, knowing the basics of bash programming is primary for Linux users.

Like any other programming language, Bash deals with variables, arguments, arithmetic operators, and various syntaxes used to write programs. We’ll have a quick overview of each one of them. To make your learning easier and get used to with Bash programs, we’ll try to explain the concepts using simple code examples. You can see the output at the end of every program so that you can try and check the programs with your results when you practice. Also, you’ll create your first bash program.

You can declare your own variables in Bash. This helps track the results of the commands given. Variable is declared as follows.

This is a common practice of declaring variables. You can use both uppercase and lowercase letters in variable names. Bash is case-sensitive. So, be consistent with your choice of letters. Also, make sure to choose a variable name that describes its purpose well.

Remember, you should never put space on the equal sign (=) and either of the words. Now, let’s see a simple example of variable declaration and its output.

In the 2nd and 3rd lines, values are assigned to two variables, firstvar and secondvar. In the 4th line, echo checks the variable values.

After that, another echo is run with no arguments. This creates a blank line to get some space out of the code. Then, another variable mydir is created as a path to a directory.

You use the Unix shell to run commands. It allows its users to pass run-time arguments to those commands. The arguments are known as command line parameters. This has two usages: flow control and specifying the input for the command.

There are some predefined variables to represent the arguments. $1 refers to the first argument, $2 refers to the second argument passed to the script, $3 represents the third argument, and so on. Following is an example. Take a look at the output for your reference.

As you can see from the output, $1 and $2 have been assigned to “the” and “sky” respectively.

To perform the basic arithmetic operations in the Bash shell, the double parentheses technique is used. The method is to use double brackets without or with a $ in the beginning. The syntax is:

Let’s have a quick look at some of the basic arithmetic operations with the following example. 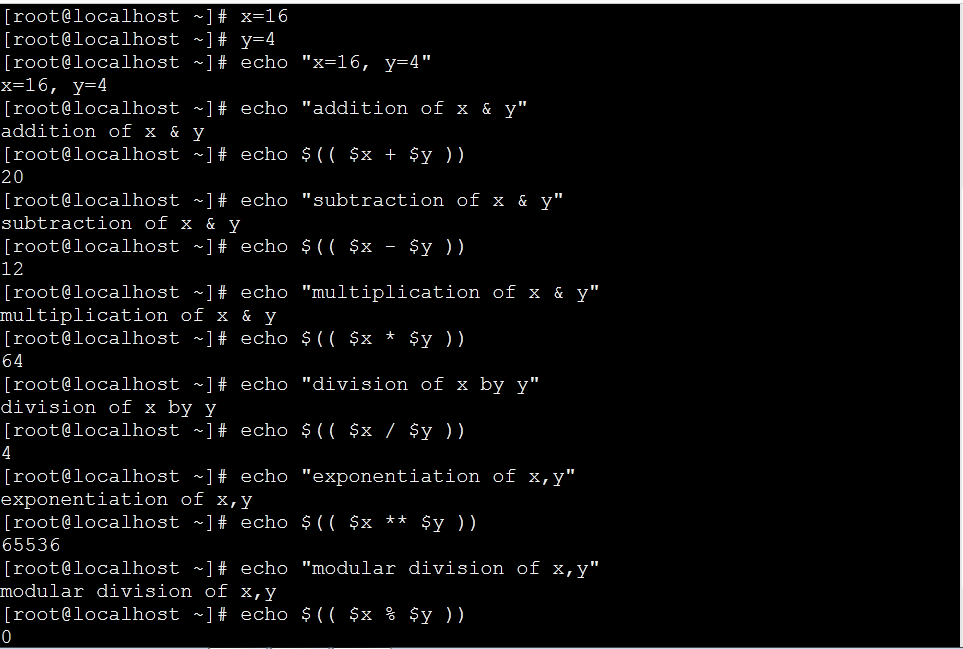 I'm an Engineer by degree and a Writer by choice. I like to learn and explore a good range of topics including Linux, programming, open-source, games, and computers. My content write-ups in LinuxHint can be your source of knowledge, guide, and values.