How to use Here Document in bash programming

Suppose the command is `cat` and HereDoc delimiter is ADDTEXT. Open text editor and create a bash file named hd-example1.sh with the following code. When you use HereDoc in any script then it is necessary to keep the same name for both the starting and ending delimiter.

Now, go to the script folder and run the following command to execute the script. Here the script is stored in Documents folder.

HereDoc uses ‘–‘ symbol to suppress any tab space from each line of heredoc text. In the following example, tab space is added at the start of each line and ‘–‘ symbol is used before the starting delimiter. When the script executes then all tab spaces are omitted from the starting of each line but it creates no effect on normal space. Here, a new file named hd-example2.sh is created to test the function of ‘–‘.

Run the following command to execute the script and show the output.

Create a new bash script with the following code. Here, two variables named start and end are declared. These variables are used within the hereDoc text. If you use quotation mark at the starting delimiter of HereDoc then the value of the variable will not print in the console.

When you will execute the file then the following output will be shown.

In the previous examples, how you can use HereDoc in any bash script are shown.  You can also create new bash file using HereDoc which is shown in the next part of this tutorial. Create a new bash file named hd-example4.sh with the following code. Here, NewFile variable is declared to set the file name of new bash script which will be created after the execution of hd-example4.sh file.  After the execution, a new bash file named output.sh will be created. If you want, you can also run this file. The task of the new file is to multiply two numbers and print the result. 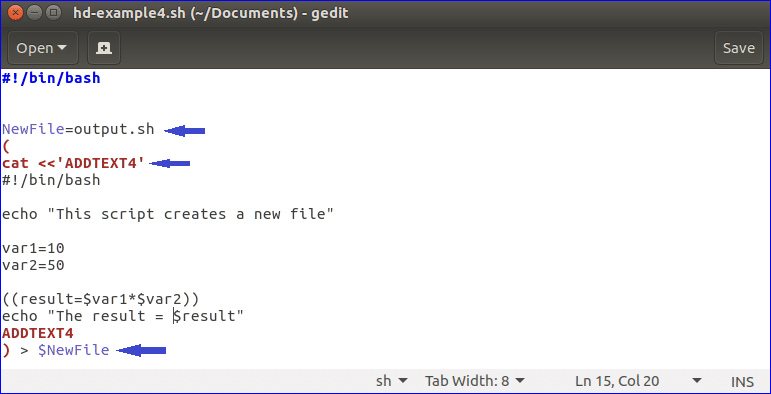 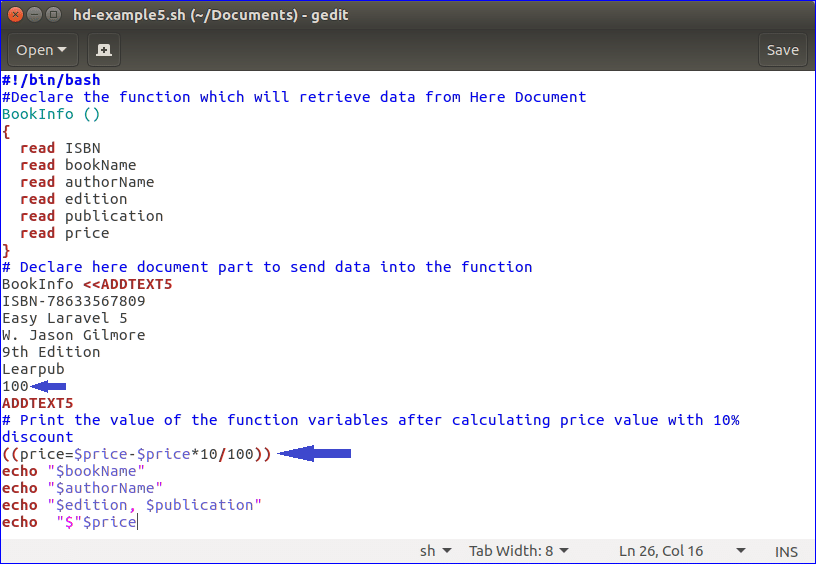 Now, run the following command to execute the script and check the output.

Here, the value of the price variable will set 100 from the HereDoc text. After setting 10% discount on price value, the value will be set as 90. So after execution, the following output will display in the console.

`cat` command is used in the most of the above examples. But you can also use any other bash commands with HereDoc. In the following example, another bash command wc is used to count the total lines and words of HereDoc text.

There are three lines and nine words in the above HereDoc text. Run the scripts to check the output.

The examples which are shown in this tutorials will help you to understand the use of HereDoc in bash script. The use of here document in the bash script helps you to make the development task easier.