A Bash function is a collection of commands that can be executed repeatedly. The goal of the function is to make the Bash scripts easier to read and prevent you from typing the same script often. Bash functions are considerably constrained in comparison to those of the majority of programming languages. For step-by-step execution, this file contains various commands. Although these commands can be entered simply into the command line, it is more convenient to save all interconnected commands for a given operation in a single file from a reusability perspective. We can utilize that file to run the specified set of commands, a single time or multiple times, depending on our needs. We will go through the fundamentals of Bash functions in this lesson and demonstrate how to use them in shell scripts.

A function is a section of code that can be called several times to carry out specific tasks in programming. Code length is decreased, and program modularity is provided. The most basic illustration of a function’s application in Bash scripting is shown in the following:

The output of the Bash basic function is printed on the terminal:

The terminal shell after the script execution is shown in the following image:

Most programming languages support the idea of functions returning a value. It implies that the function must return the data to the place from which it is called. Bash functions don’t support returning a value when they are called, unlike functions in real programming languages. However, they give us the option to establish a return status, which works similarly to the exit status used by a program or command to terminate.

The variable “$?” is allocated the word “return”, which can be employed to describe the return’s current state. The function is ended by the return statement, which also serves as the exit status for the function.

The Bash script output the value specified to a return command as follows:

In a script, a global variable is a variable that may be accessed from any location and has no restrictions on its scope. Even if a variable is declared inside a function, it is automatically defined as a global variable. Variables can also be created locally. Once they have been allocated for the first time, local variables can be specified inside the function body using the keyword “local.” Only that function allows you to access them. The same name might be given to local variables created in other functions. 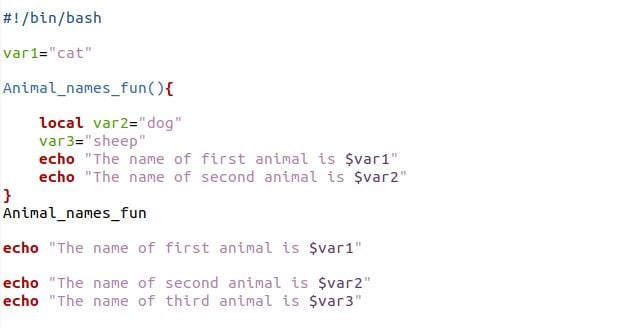 You can notify the output of accessing the local and global variables in the bash program as follows:

This idea of overriding Bash commands may be helpful in some circumstances, such as when we want to utilize a command with particular options. Additionally, there are situations when we do not want to repeat the entire command with options within the script. We can use options to alter the built-in Bash command in these situations. Let’s use an example to understand better the idea of overriding commands in Bash Shell Scripting:

In the previous Bash script, we have a function echo. Within the echo function, we overrode the echo command and inserted the built-in timestamp method as an argument to the echo command.

The output of the Bash override function is displayed in the following image:

We discussed the Bash function on this topic. A chunk of reusable code explicitly created for a given task is called a Bash function. Once defined, it can be used several times in a script. Bash engages with the operating system to carry out commands received from the shell after reading them. One fantastic feature of Bash is that it allows you to combine a lot of its commands and functions into a single executable script, which makes it easier to organize your work.