We all know that many of the basic concepts of programming contain many data structures, variables, statements, and loops. Loops are very well-known among all of them when running a series of instructions or doing some tasks under certain conditions. The most famous and most used loop is the “for” loop. So, today we will be looking at the syntax and working of the “for” loop for a series of numbers, i.e., 1 to 10. Let’s start by opening a terminal shell with the help of a “Ctrl+Alt+T” command on the Ubuntu 20.04 desktop system.

Our first example will cover the “for” loop for its most used syntax in the programming language, i.e., simple brackets. Let’s make a bash file first with the utilization of a “touch” query in your shell as per the output below.

The bash file has been successfully created in the basic home folder of Ubuntu 20.04. Open it within some editor tool to create a bash script in it. You can also use the “vim” editor instead of the “nano” editor.

Now the file is opened in the GNU nano, 4.8 editors. We have added the bash support in it at the start of a file. We want to run certain commands by using the “for” loop for up to 10 iterations. The “for” uses simple brackets as the first syntax and specifies the condition in it. The loop’s start value is “1” as per the iterator “I”. It will continue to run until the iterator value becomes less than or equivalent to 10. On every iteration, the iterator value would be incremented by 1 until the iterator becomes 10. Within every iteration, the “do” clause will be executed. It will run the “echo” statement to show the iteration number using iterator “I”. Save this code by “Ctrl+S”.

Press Ctrl+X to exit the editor. Run your code using the “bash” keyword along with the name of a file. You can see the output shows the result of 10 iterations achieved by a “for” loop. 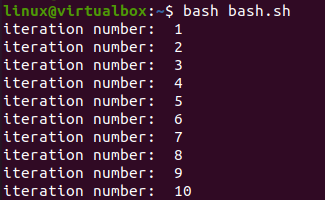 The second easy method to use the “for” loop is to mention its iterations within the curly brackets. Open the same bash file once again with the “nano” command. Add the bash extension in it first. After that, the “for” loop has been initialized with the word “for”. Now, you have to specify the iterator variable “I” after the word “for”. To mention, the range of iterations in brackets must be followed by the word “in” as per the below image. The range has been defined from 1 to 10 with two dots in between. The “for” loop will continue to run until 10 iterations, i.e., the “do” clause of the loop. The main point about this syntax of the “for” loop is, there is no need to specify the incrementation as it will automatically be incremented by 1.

The execution of this syntax for the “for” loop leads us to run the echo statement within the “do” clause 10 times with the iteration number mentioned below. 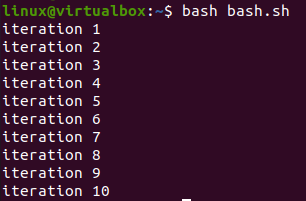 Another method to use the “for” loop in a bash script is quite similar to the above method with a little change. In this technique, we will not be using any brackets within the “for” loop. So, after the bash support, start the “for” loop with the iterator variable “I” followed by the keyword “in”. After the word “in”, you must specify the range as we have done within the code below, i.e., 1 to 10. This loop will work as the above examples do and display the message of the echo statement 10 times with the iteration number on the terminal.

The code runs the “echo” statement 10 times with its iteration number as expected. 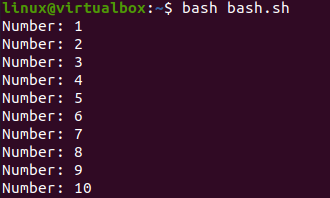 Another unique way to define the “for” loop is using the “seq” expression in it. So, open the same file and add the bash extension to it. The syntax of the “for” loop has been shown in the snap attached below. The “for” loop has started with the iterator variable “I” followed by the keyword “in”. Then we have used the expression “seq” to define the range of this loop, i.e., 1 to 10. The “seq” expression has been substituted by the single expression colons, i.e., ““”. Until the sequence value reaches 10, the echo statement of a loop will continue to be executed with the sequence number mentioned in it. You can see this method has no increment expression mentioned in it. This means it will automatically increment an iterator by 1.

After the execution of this “for” loop, the output is shown below. The display shows the 10 iterations with the iteration number in the output line. 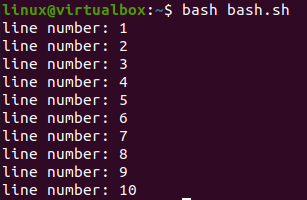 The last example is a bonus illustration of the “for” loop. The for loop has been started, and the iterator “a” has been specified. This iterator is taking English alphabets as their next consecutive iterator value. We have chosen the first 10 English alphabets here, i.e., A to J. The “do” clause will continue to run the echo statement that is used to display each alphabet every time until the end of the loop. The loop ends here, and there is no proper increment variable defined in this method as well.

Upon executing this bash code with the help of a bash command along with the name of a file, we have got the 10 statements as an output showing alphabets from A to J. 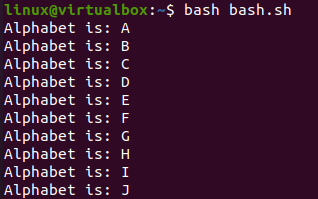 The guide has covered a total of 5 methods to use the “for” loop in bash script. All the examples used in this article are very simple to understand and easy to implement by any naive bash user. Hence, we firmly believe that this article will help every bash user.