While working in many programming languages, you may have used different conditional statements like if-else, switch, and many more. Within the Bash programming, we tend to use a “case” statement in which only one matching block gets executed after the execution of the case statement. The Bash also provides us the opportunity to perform the fallthrough in the case statement like executing the several matching blocks or all blocks.

Before starting our examples, we need to create the Bash file. For this, you must launch the consol application that is built-in in each Linux distribution. To launch the console application, you can try the shortcut “Ctrl+Alt+T”. Use the Linux list “ls” query to list down all the folders in the current home directory. There are no Bash files available, so execute the “touch” instruction to generate a new Bash file named “fall.sh”. After this, list the contents of the directory again and the file “fall.sh” is listed in it.

After the file creation, it’s time to open it within some built-in editor to start adding the Bash script in it. You can utilize the text editor if you are new to Bash for your convenience. Otherwise, prefer to use the “Gnu Nano” editor for quick edits and execution of the Bash script. Execute the “nano” command in the shell to open the “fall.sh” file within the Nano editor in a second. The command is as follows: 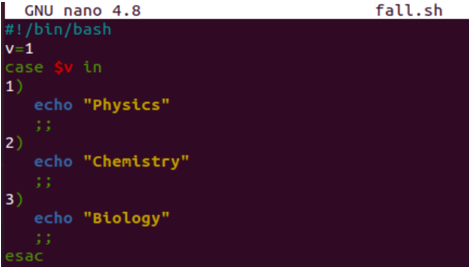 Within the console query area, we execute the Bash instruction to run the “fall.sh” Bash file and see its results. The output displays the result of the first case – “Physics”. This is because the first case matched with the condition in the case statement start – variable “v” has a value of 1. 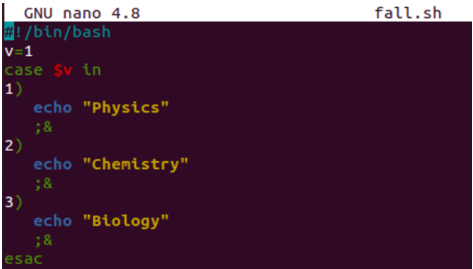 We tried the “Bash” instruction with the updated “fall.sh” file name in the query area of a console application of the Ubuntu 20.04 system. The use of “;&” special characters leads to the case fallthrough where each echo statement from each case is executed and displayed the respective result due to the fall-through that happened in the code.

Within the example, we will use a pattern matching to perform the fall-through in the case statement. We update the value of variable “v” with some string value, “gmr”. The case statement used in this Bash script uses the variable “v” to search for specific patterns in each case. All three cases are different from the previous two examples containing patterns to be matched. The first case matches only the middle character, the second case matches its first character, while the third case matches all the three characters with the variable “v”. As the first two cases got satisfied, their respective “echo” statements are executed and the console displays “Physics” and “Chemistry”. This is because we utilized the pattern matching along with the “;;&” special characters. End this program with a Ctrl+X shortcut after saving the Bash file with the “Ctrl+S” shortcut. 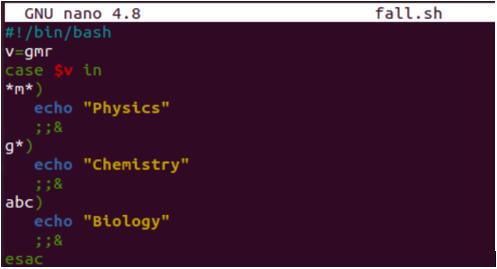 Our code is saved and is ready to be executed. We tried the Bash instruction in the Ubuntu 20.04 console along with the “fall.sh” file as presented. It displayed the result of the first two cases after matching the pattern while utilizing the fallthrough in the case statements “Physics” and “Chemistry” . The third case was not executed because the pattern didn’t match.