“awk” is a very powerful Linux command that can be used with other commands as well as with other variables. This command is essentially used to read the content of a file. The process of file reading has never been this much easier as it is with this efficient command. File reading and writing are very repeatedly used especially if you are a programmer. The read file can then be used to process its content, to modify it, or even to simply print it.

However, there are situations in which you do not intend to read the entire content of that file rather you are only concerned with a specific portion of that file. In such a situation, it is highly not recommended to read the entire file since it will occupy extra space and will also take a longer time for processing rather you should directly hit that particular portion of that file. In this article, we aim to walk you through the different methods of using the “awk” command to print the last column from a file.

Different Ways of using the “awk” Command to Print the Last Column from a File:

There are two different methods in which we can use the “awk” command to print the last column from a file. Although, these two methods can be used interchangeably because after all, they render the very same output, however, the first method is more suitable for the situation where you know the exact number of columns of a file and the second method is helpful when the total number of columns is unknown. Let us take a look at both these methods one by one.

Note: We have used Linux Mint 20 for demonstrating both of these methods, however, you are free to select any flavor of Linux of your choice.

Method # 1: When you know the Total Number of Columns of a File:

This method can be used when you know the exact number of columns in a file e.g. 3, 5, 10, etc. For demonstrating this method, the following steps should be performed in the specified order:

Create a text file with any name of your choice in your Home folder. In this scenario, we have named it as awk.txt. Now double click on this file to open it and type the data shown in the image below in your text file. There are a total of three different columns and the columns are separated from each other by tab space. You can also type any random data of your choice. 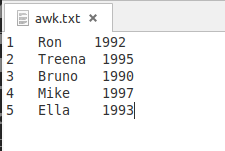 After creating this file, you have to save it and close it. Now launch the terminal in Linux Mint 20 by clicking on its icon located on the taskbar. The Linux Mint 20 terminal is also shown in the following image:

Now type the below-mentioned command in your terminal and then press the Enter key to execute it:

As soon as you will hit the Enter key, all the values of the last column of the file awk.txt will appear on your terminal as shown in the following image. The awk command will read this column whereas the print command will be responsible for displaying its values on the terminal.

Method # 2: When the Total Number of Columns of a File is Unknown:

This method is generally used when you do not know about the total number of columns in a file. For printing the last column of a file through this method, you will have to proceed as follows:

We are using the same text file that we have created for the method above. All we have to do is to launch the terminal and then type the following command in it:

Here, NF is a variable whose job is to explicitly print the last column from a file. For example, if there are 10 or 20 or even more columns in a file but you do not know their exact number and you still want to access the last column, then this variable can prove to be very helpful for you. Again, you need to replace “file” with the name of your text file. In our case, since we have used the same file as that of Method # 1, therefore, we have replaced file.txt with awk.txt.

After typing this command in your terminal, you need to run it by pressing the Enter key. You will notice that the output of this command is identical to the output of the command used in the method above i.e. the last column of the text file which contained the year data has been successfully printed on the terminal.

In this article, we gave you the guidance about printing only the last column from a file while making use of the “awk” command. There are a lot more aspects of this command which can be explored in detail i.e. this command can also be used in conjunction with other different commands to render a different kind of output. However, for the scope of today’s discussion, our concern was only to demonstrate its usage for printing the last column from a file. We presented to you the two different ways of doing the same thing. Now it entirely depends on your situation that which of these methods you choose to follow.