The process of sending text messages can be automated easily using the Python Programming Language by writing a few lines of code. Python provides modules like PYAIRMORE that can be used to send text messages from android device. This module has many functions but we will discuss about sending messages. Sending messages using PYAIRMORE is same as sending messages from your android. The only difference is we perform this task by writing a script and by means of scripting, you can automate a lot of stuff. To perform this task, you must have an android device with AirMore app installed on it.

To automate the sending of messages from your android device on another android device, first of all we have to install PYAIRMORE module. We can install this module by running the following command in the terminal.

The above command will install this module and now we can use this module to send text messages on Android.

AirMore is a very useful app to transfer data between mobile and PC. It supports both android and iOS. This app can connect a mobile with PC and we can control our mobile from PC. In this article, we will discuss only one function of this app, that is sending text messages on android device by writing a script.

After installing PYAIRMORE, now we will connect our Android with PC so that we can send messages from android by writing a python script in PC. This can be done by installing AirMore app in Android. To install AirMore app in android, click on the link given below. 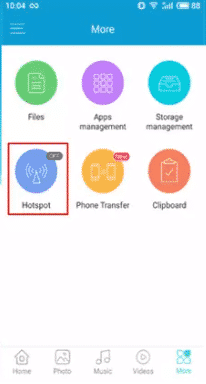 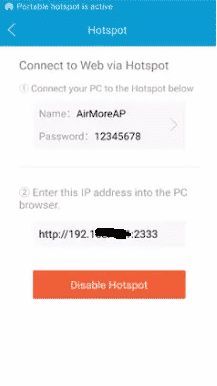 After this, connect your PC to the hotspot of your Android device and provide the password. Now open browser on PC, enter IP address, we got from AirMore app in the search box and press enter. A blue box will appear on the android screen to confirm connection. Confirm connection and now your PC is connected with Android.

NOTE: Note the IP Address and Port Number shown in the above figure, as they are required in the script we will write later.

After installing AirMore app in your android, go to the following link and click on “Launch AirMore web to connect”.

A window, as shown in the following figure, will be opened.

\\ importing module for ip address
>>> from ipaddress import IPv4Address
\\ importing module to create a session between android and PC
>>> from pyairmore.request import AirmoreSession
\\ Creating an instance of IP address
>>> androidIP = IPv4Address("192.xx.xx.xx")
\\ creating a session between android and PC
>>> androidSession = AirmoreSession(androidIP)
\\ checking whether the connection is established or not
>>> print(androidSession.is_server_running)
True

If the android  is connected with PC then output of the code will be “True”, otherwise it will be “False”. After successful connection, now we write a python script to send messages.

So far we have connected our android device with PC and authenticated the connection, now we move to the python script to send message from android to another android. Following is the complete python code to send message

So the above script will send a text message from android device via python script. But it will work when we run this script. To run this script automatically, we will add this to crontab. Run the following command in the terminal to edit crontab file.

A file will be opened in your favourite editor. Go to the end of the file and add the following command to automate the task

This will run the script at exact 08:00 AM every day. If you want to run this script at another time, it can also be done. In the above command, the first digit from left indicates the minutes, next indicates hours, then days of week, then number of month and last indicates the day of the month.

We can schedule this task at any time, any day and any month by using this command.

In this article, we discussed about sending text messages using your android cell number by writing a python script. First, we installed PYAIRMORE module then we discussed about AirMore app and how to install AirMore in android. There are some other modules in Python as well that can be used to send SMS messages via your SIM card. Similarly, if you want an SMS service for your business and you don’t want to use a SIM card, then you can buy a commercial API service such as Twilio and that can save you a lot of effort.