You are a graphics designer or a gamer who is looking for a compact yet powerful laptop that can do your daily tasks and gaming with ease right? This calls for trouble as there are many laptops available but which one to buy? Well, to solve this problem of yours we will be reviewing an amazing laptop that packs awesome features for your long hours of graphics intense work and gaming marathons. The laptop we are talking about is the Asus Rog Flow X13.

Asus is a brand that is mostly known for its gaming-centric hardware which includes PCs, monitors, graphics cards, motherboards, and laptops. The company started its operations in 1989 and since then, it continuously moved forward which ultimately led them to become one of the top brands in the gaming world.

Asus Rog Flow X13 is one powerful laptop with an amazing cooling system that doesn’t let it get hot which can affect your laptop’s performance and you don’t want that to happen right?

Asus Rog Flow X13 packs AMD Ryzen 9 5900Hs processor which is paired with NVIDIA RTX 3050Ti + RTX 3080 (can be connected externally through ROG XG Mobile External Graphics). It has 16GB of 3200MHz DDR RAM and it comes with 1TB PCIe 3.0 NVMe which makes your programs and games load faster to save your time. 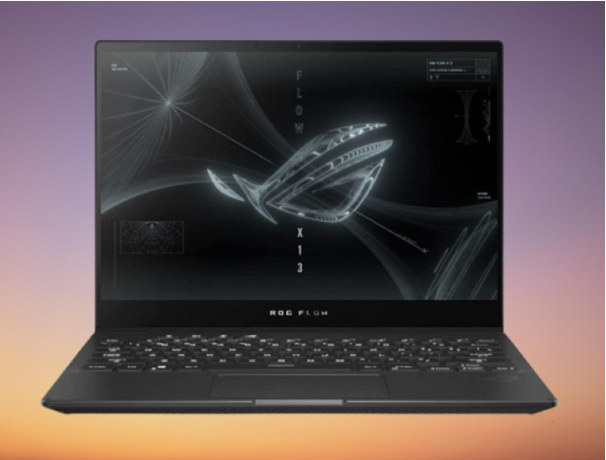 The specifications of Asus Rog Flow include:

Pantone is a term mostly used in the graphics designing industry and it refers to Pantone Matching System (PMS). Each color in PMS has a unique number like PMS 205 is pink and the main benefit you can get from a PMS validated display is you get the best representation of the Pantone color.

Asus Rog Flow X13 is equipped with AMD Ryzen 5900Hs which is clocked at 3.0GHz and can go up to 4.6GHz with turbo boost.

It has a built-in NVIDIA RTX 3050Ti with 4GB of DDR6 VRAM and you can connect another external GPU which is RTX 3080 (included) through ROG XG Mobile External Graphics VRAM which is also called eGPU and it has 16GB of DDR6 VRAM.

You can buy this laptop with an external GPU by using the link below.

Asus Rog Flow X13 remains cool even in situations like rendering or playing that graphic intensive gaming as it has self-cleaning flat heat pipes which are later connected to larger heatsinks. It also has more fans and there is some sort of liquid metal (as claimed by Asus) that keeps the CPU at optimal temperatures.

Asus Rog Flow X13 features a full keyboard and each key is curved to support your fingertips during typing. There is a 1.7mm travel distance between the keys so that you don’t make mistakes while typing.

Asus Rog Flow X13 has 16GB 3200MHz onboard DDR4 RAM which means it is soldered and cannot be removed and YOU CAN NOT UPGRADE IT but 16GB is more than enough isn’t it?

The system also has 1 TB M.2 2230 PCIe 3.0 x4 NVMe SSD which is there to give you the speed you need when it comes to loading whether it is your work-related software or gaming.

Asus Rog Flow X13 is a small laptop that can be connected with an external GPU (eGPU) when you feel like your internal GPU isn’t enough for you. It has good audio features and a super-comfortable keyboard. The colors looked good on the display but the brightness is just average.

The battery of Asus Rog Flow X13 doesn’t work well with eGPU but it can give you around 8 hours of video playback which looks just fine looking at the size of the battery don’t you think the same? And you can purchase it without eGPU if you feel okay with RTX 3050Ti.