In C++, if we have to declare an array of pointers, we create an array that contains the address of the elements present inside it that points to some address values.

Working of pointers array in C++

The pointer value points to the address of the values present inside the array. If you are willing to access the values, we can access each value by using their address because it only points to that specific address. The use of pointers makes the functionality operations more efficient and also affects the performance level. Now we will see that how to declare a pointer array.

As we have used a sample declaration of pointer array above.

In this above line, we have declared an array of pointers having 5 elements. This array will contain the address of the values in it. The address is the location of the element where the array is stored inside the memory. This memory address always turns the point to the element that is stored at that location.

Creation of array of pointers in C++

First, we create an array having elements. Suppose we have 5 elements.

After that, we create a pointer array that stores the address of elements of the array.

After that, the address of elements is stored into the arrays of pointers by using the loop.

Now we can access the elements in the array with the pointers; it will provide the same value.  Now we will use some elementary examples here that will help you in the understanding concept.

In this example, we have simply displayed the values inside the array. But this time, it is not done by displaying the values through the inside number but by using pointers. So first step in the main program, we dynamically create the array of size 5.

After that, as we have described before in the topic’s part “creation of an array of pointers in C++”, the array is initialized with the numbers. We will use for loop to enter the values in the respective indexes. This is done through the pointers. ’10’ is a constant here that is used to multiply the value with the upcoming one; this is a smart approach to assigning the values.

Now the value of p is 1, so after multiplying, it will be 2, at the point. 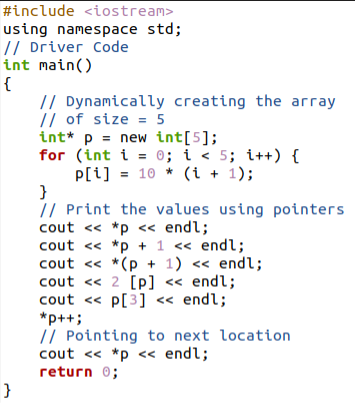 For instance, when the loop iterates for the first time, the value of “I” will be ‘0’, so when in the parenthesis, it will be added with 1, it will become 1, and after multiplying with the constant, the result will be equals to the constant itself.  For the second index, in the next iteration, when the value of I is ‘1’, after addition with 1, it will be 2, so when it is multiplied by 10, it will become 20. And then so on in each iteration till the value to be entered is 50. In the case of displaying the values through pointers, we have used different techniques; these will surely be beneficial for you in understanding perspective. First output providing statement contains:

As we know that this ‘*’ symbol displays the address, one thing should be kept in mind: when we use a pointer to display the value without using the index, it automatically assigns the first value by default, the result will be 10. The next is:

It will simply add the default value with one, so the answer is 11. Moving towards the next value,

Similarly, other results will be displayed. In the end, the pointer is terminated as we have also taken the result of that incremented value.

For the resultant value, go to the terminal of Linux and use the g++ compiler to compile and execute the code.

This example relates to the displaying of addresses using arrays and pointers to display the difference between them. For this purpose, in the main program, we declare an array having a float data type. The float pointer variable is declared.

Now with the help of this pointer, we will be able to display the address. But first, let us display the address of the elements by using an array. This is done through a FOR loop. This is the easy and generic way of displaying the array’s content through the index number. 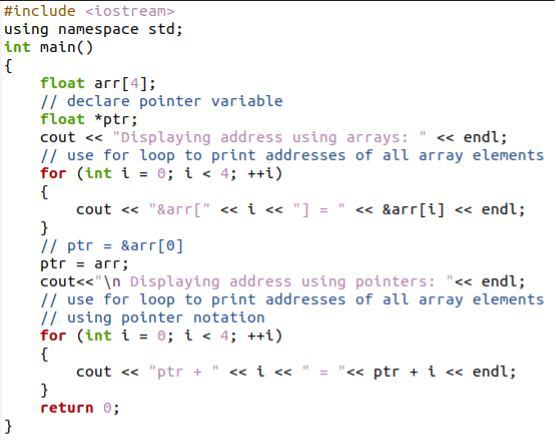 Again use the g++ compiler to compile and then execute the code in the Linux terminal to display the resultant values. 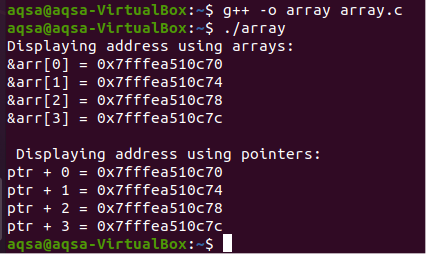 As you execute the code, you will see that the answer for both the methods is the same; either through an array or through the pointers, the same result is obtained.

An array of pointers is used in C++ in the Ubuntu Linux operating system to elaborate on fetching data through the address and arrays. This article was all about the array of pointers in C++. We have elaborated on the syntax and a few examples related to pointers. These examples can be implemented on any compiler as per the user’s choice.