Is your GPU busted? Or you are looking for a GPU upgrade and you’ve sold your current GPU? Well, that calls for trouble due to the shortage of graphic cards and this will take time to buy another GPU but what will you do until then? Don’t worry about that because we got you covered as we will be reviewing AMD Radeon HD 7950 which will surely be a good fit for you until you find the GPU of your dreams.

AMD has been releasing Graphics cards for quite a long time now and it is one of the most trusted brands today in the gaming community.

Announced back in 2012, AMD Radeon HD 7950 is packed with 3GB of GDDR5 memory which is clocked at 5000Mhz, the 384-bit memory bus width, and performance wise it lies somewhere between NVIDIA’s GTX 670 and GTX 770. The core clock frequency is at 860MHz which can go up to 925MHz and there are many other built-in features that we will discuss below:

Although there are many variants, we will be using the Sapphire Radeon HD 7950 for our review. 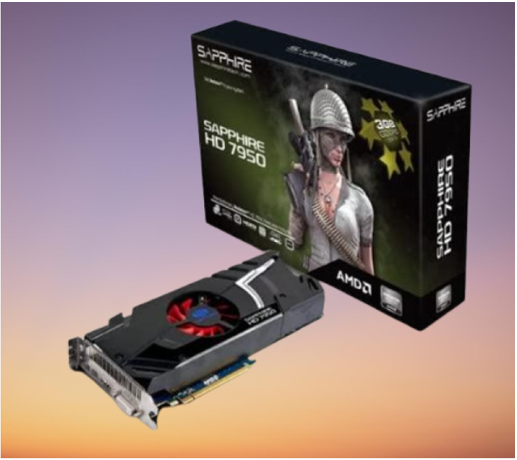 We will now discuss the specifications of Sapphire Radeon HD 7950:

Sapphire Radeon HD 7950 doesn’t have any promising features as compared to the latest GPUs but is it good enough? We will let you decide after you go through the following section of features:

AMD Eyefinity 2.0: AMD Eyefinity 2.0 enhances your productivity by providing you the connectivity of up to 3 monitors so that you won’t need to switch between tabs and with Sapphire Flex Technology.

TRIXX Utility: TRIXX Utility enables you to achieve higher FPS and it also upscales the image.

AMD HD3D: AMD HD3D is there to optimize 3D gaming and enhance your video-watching experience.

The features look good enough for anyone who is looking for optimal multimedia performance.

Looking at the table below you can see the performance of AMD Radeon HD 7950 in the most in-demand games:

Looking at the table we can conclude that Sapphire Radeon HD 7950 performs decent enough in most of the in-demand games.

AMD Radeon HD 7950 could be a good alternative if you want to upgrade in the future and already sold your current GPU. It performs well in the games that we have run and shared the average FPS in a table. It is somehow noisy and a bit more expensive compared to the competitors but it performs better when overclocked and destroys the competition.

It could come in handy when you are looking for something that you can use while you are waiting for the release of your favorite GPU and in this review, we conclude that Sapphire Radeon HD 7950 is an above-average GPU in 2022 that performs well enough to be called worthy in 2022.