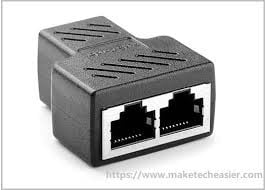 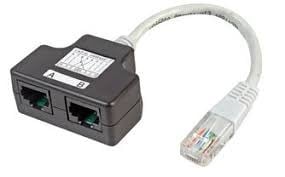 Numerous networking devices expand a network like switches, hubs, and ethernet splitters. The simplest among these devices is the modest ethernet splitters. Ethernet splitters are inexpensive, minuscule network devices that split one Ethernet signal into two. These are also one of the most uncomplicated networking equipment, which does not require a power supply and no special buttons or status lights on its body. This tiny device is pretty straightforward, consisting only of three ethernet ports, two on one side and one on the other side. Some types have a short ethernet cable with an RJ45 connector on one side and two ethernet ports on the other side.

The splitters have been in use in the networking space for a long time, but many can still set them up properly. Contrary to what most people think, ethernet splitters should always come in pairs. Making a direct connection from one end of the splitter to the router and then connecting two devices to the two ethernet ports on one side simply won’t work. There’s a proper way to set-up ethernet splitters in a network for them to work perfectly.

Ethernet splitters are useful in connecting two devices in a different room from where the main signal is coming. They help save cables, network wall outlets and provide reliable connections in most cases. As was mentioned previously, ethernet splitters come in pairs. One splitter merges two signals from a device (in most cases, the router), and one unmerge the signals into two lanes, allowing two devices to be connected.

You have a router in Room A, and you have two computers in Room B, but you only have one ethernet wall jack in each room. In this case, you take one splitter, connect two cables to the router, connect the other end of the cables to the splitter, and then connect one end of the splitter to the wall jack in Room A. This is where the two signals from the router are merged into one. Next, take the other splitter and connect the side with one port to Room B’s wall jack. Room A’s merged signal will now be unmerged back into two, and now you have two ethernet ports for the two devices in Room B.

As you can see, one splitter is used to unsplit two signals and another one to split them, which is why the splitters should always come in pairs. The number of cables and number of wall jacks is also reduced as there is no need to add another ethernet wall jack in each room and no need to use two cables in between these jacks. This is just one of the simple scenarios where ethernet splitters serve their purpose best.

Perhaps the common question when using ethernet splitters is, “Will it slow down the connection?” The answer would depend entirely on the type of network where the splitters are used. Ethernet splitters are based on the rather old 100BASE-T standard or more commonly known as Fast Ethernet, which carries the 100Mbps nominal traffic rate.

In a Cat5e ethernet cable, there are 4 pairs of wires, which means a total of 8 wires in one cable. In Fast Ethernet, only two pairs out of four are utilized; the other two pairs are just sitting there, unused. The splitter will take two 100Mbps signals from a router, which means two ethernet cables, and merge them on one end. These signals will then be unmerged into two 100Mbps signals on the other end. Each port on the receiving end of the splitter can therefore carry a max speed of 100Mbps. To answer the question then, if the splitters are used in a 100Mbps network, no, they will not slow down the connection. However, if your router can provide a speed of 1Gbps and you use a splitter in between, then the speed will be greatly reduced to 100Mbps, theoretically. In this case, the splitters did reduce the speed, and the connection will be slower.

Ethernet splitters may come in handy in certain circumstances, but they have a lot of drawbacks. For one, they can only provide a maximum speed of 100Mbps per ethernet port. In a network that can provide more than 100Mbps, the resources won’t be fully optimized due to this limitation. Moreover, the number of devices you can connect to is limited to just two, so if there are more than two devices connected, ethernet splitters will not be the best option. In addition, if you only have one remaining ethernet port in your router, it would be impossible to use the splitters at all; some sacrifices have to be made. Furthermore, although they reduce the number of cables to connect two networks, two splitters are still required for the setup to work.

Ethernet splitters have been around for ages, but simple as they are, there isn’t much improvement to overcome their limitations. They’re still based on the aging Fast Ethernet standard that may no longer be as significant in today’s demand for faster speed. Although they have their own set of pros, they still simply won’t a viable option in most cases. With today’s technological advances, there’s still a lot of hope for the future of ethernet splitters. Some genius might just be able to raise it to a Gigabit Ethernet standard.