Even if most of the tech experts actively claim that RSS (Rich Site Summary) is dead especially after Google Reader was discontinued 5 years ago but it isn’t yet as still many people rely on RSS to get the latest news, podcasts, videos etc. and almost every website is still offering an RSS feed.

Many users who are new to the Linux environment might find it difficult to choose the best RSS reader for Ubuntu. So today we are coming up with top 10 RSS readers for Ubuntu from which you can choose the one that best suits you.

Liferea, also known as Linux Feed Reader, is a simple online news feed reader. Liferea is free, lightweight, and fast news aggregator for Linux which is very easy to use. 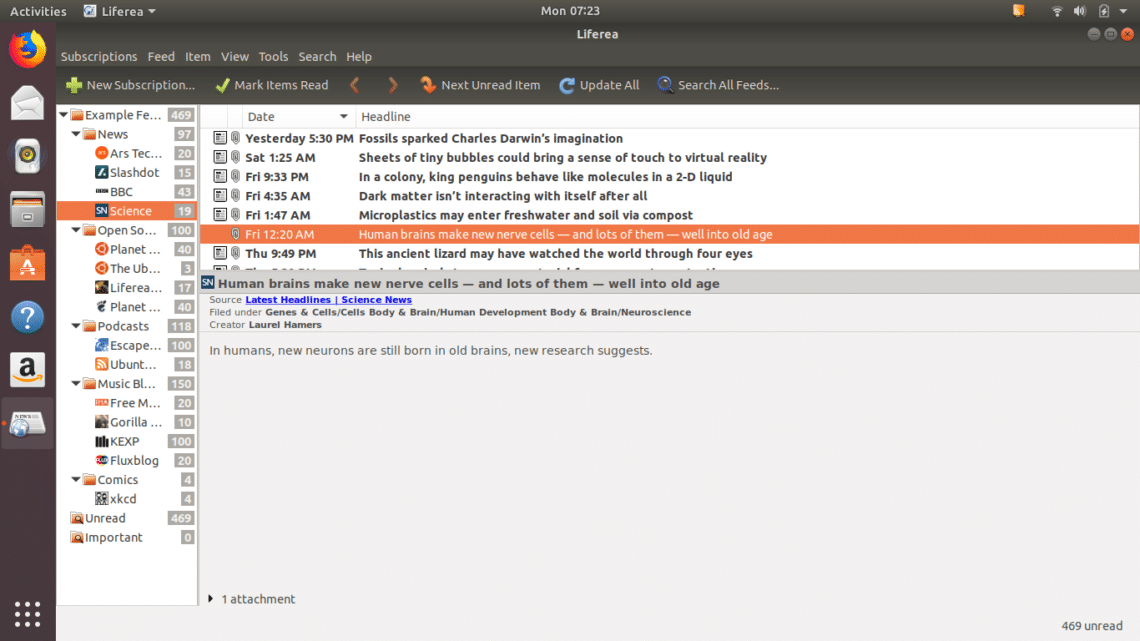 Liferea offers features such as sync support with TinyTinyRSS and it also lets you read feed content offline too. To install Liferea you can go to Ubuntu Software Centre or you can also install it by running following command in Terminal:

Just like Thunderbird, Evolution is also a professional mail client with RSS feed support. It is developed under the GNOME project and available in various Linux repositories. It has a very simple user interface and it is very easy to use. 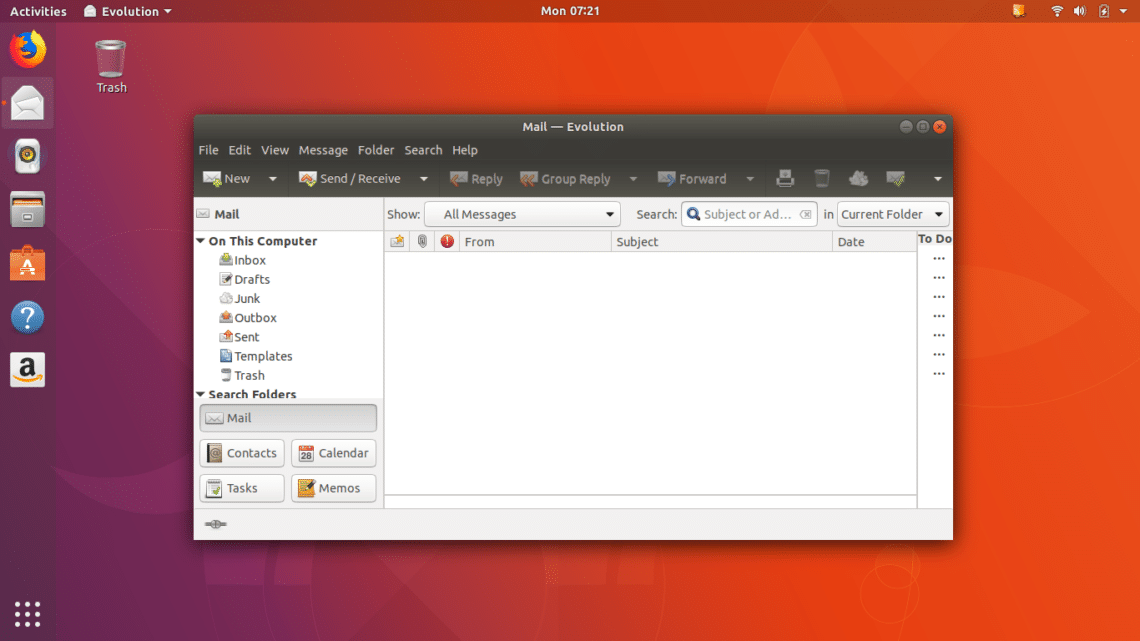 Evolution comes with all the features every basic RSS reader comes with including sync support and offline reading. You can install Evolution using Ubuntu Software Centre or by running following command in the Termainal:

Thunderbird is a popular mail client on the Linux environment and comes with RSS reader support. Mozilla Thunderbird comes pre-installed with most of the Linux distributions. It is a feature rich RSS reader and has very slick user interface which is very easy to use. 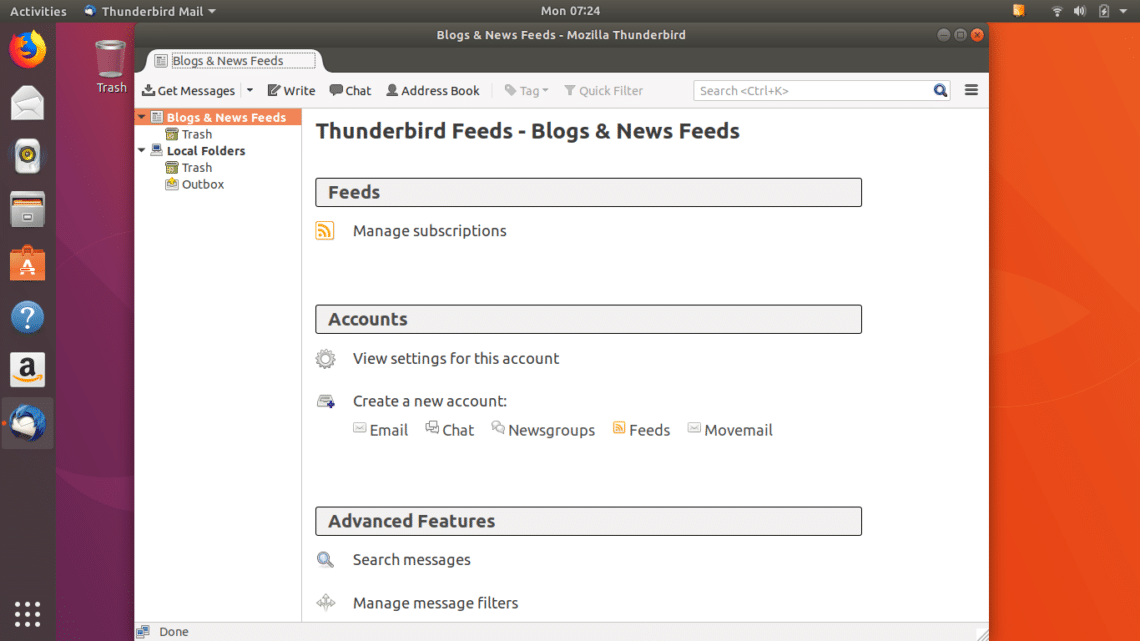 If Thunderbird doesn’t come pre-installed in your Linux distribution you can download and install it using Ubuntu Software Centre or running the command given below in Terminal:

Akregator is a RSS reader developed by KDE project and it is a default RSS reader in KDE Plasma Environment. It is a feature rich RSS reader which uses KDE’s Konqueror browser so that you don’t need to switch between apps and it also offers features like notifications, automatic feeds and many other features. 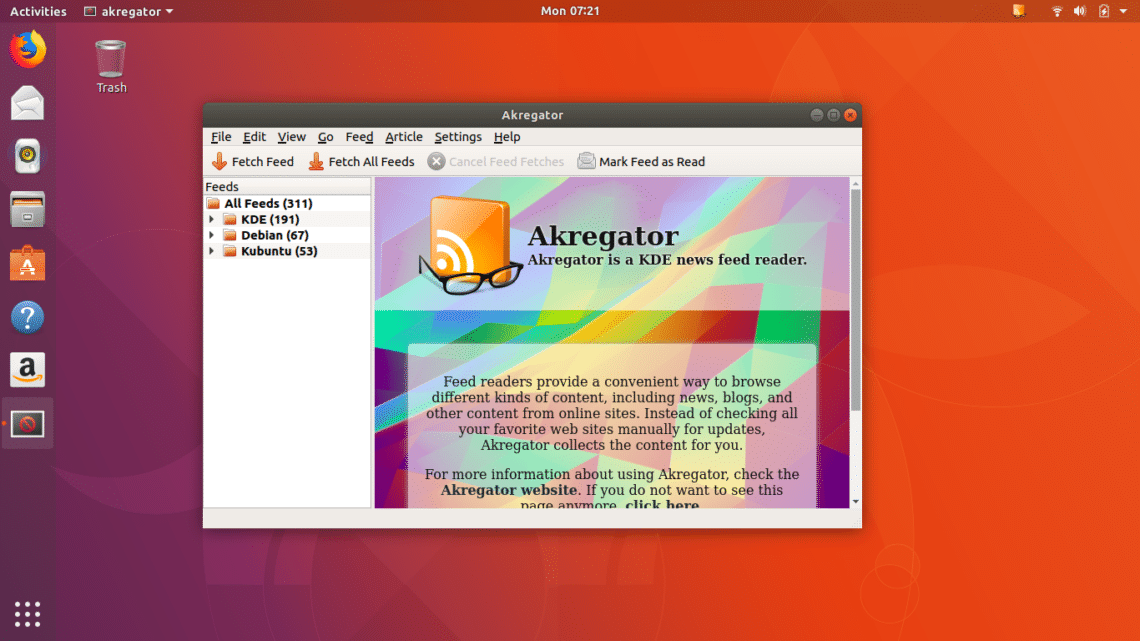 Akregator is surely one of the best RSS readers available for Ubuntu as it has a simple user interface and it is very easy to use. To download and install Akregator run following command in Terminal or go to Software Centre.

Blam is a very basic RSS reader and it runs on minimal use of resources. It has a very simple user interface and can be used for reading feeds and import/export feeds. 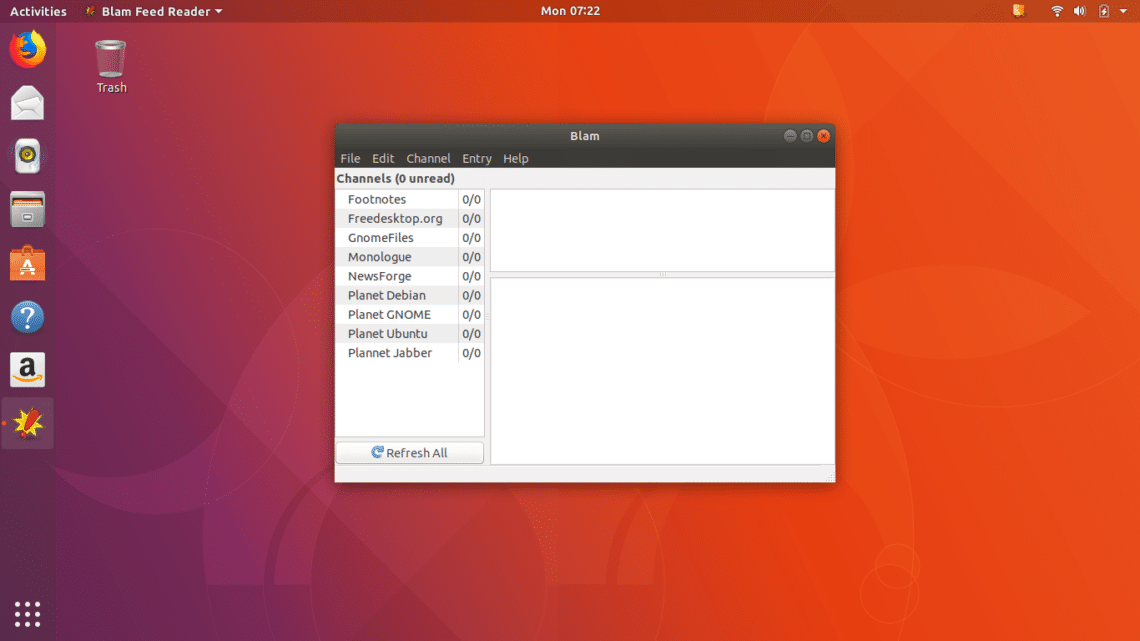 If you are looking for simple RSS reader then Blam is perfect for you. It can be downloaded and installed from Software Centre or by running following command in Terminal:

QuiteRSS is a cross-platform and open-source RSS feed reader which is distributed under GNU General Public License. It is one of the best RSS readers which you can use anywhere and comes with lots of features. It comes with a very good user interface which is very easy to use even if you are new to QuiteRSS. 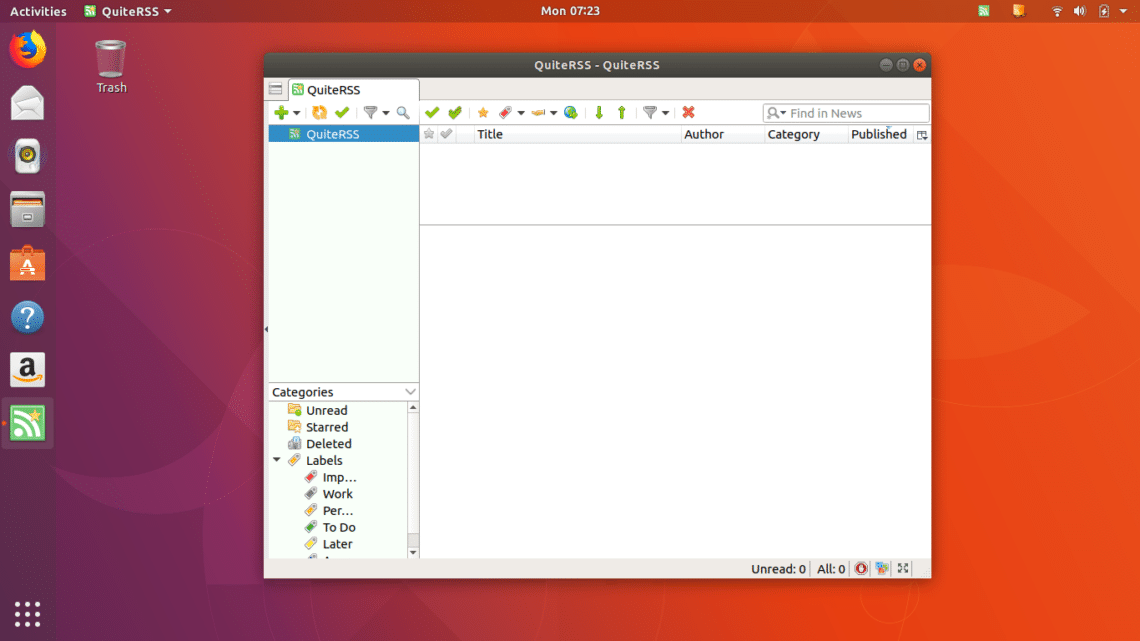 QuiteRSS offers features like automatic scheduled feeds, content blocking and a webkit browser so that you can perform all the tasks in one single app. It is available in Ubuntu Software Centre from where you can download and install it.

Yes you read it correct! Mozilla Firefox comes with support for RSS reader and it is very simple to use. You can access news feeds using Bookmarks Toolbar. 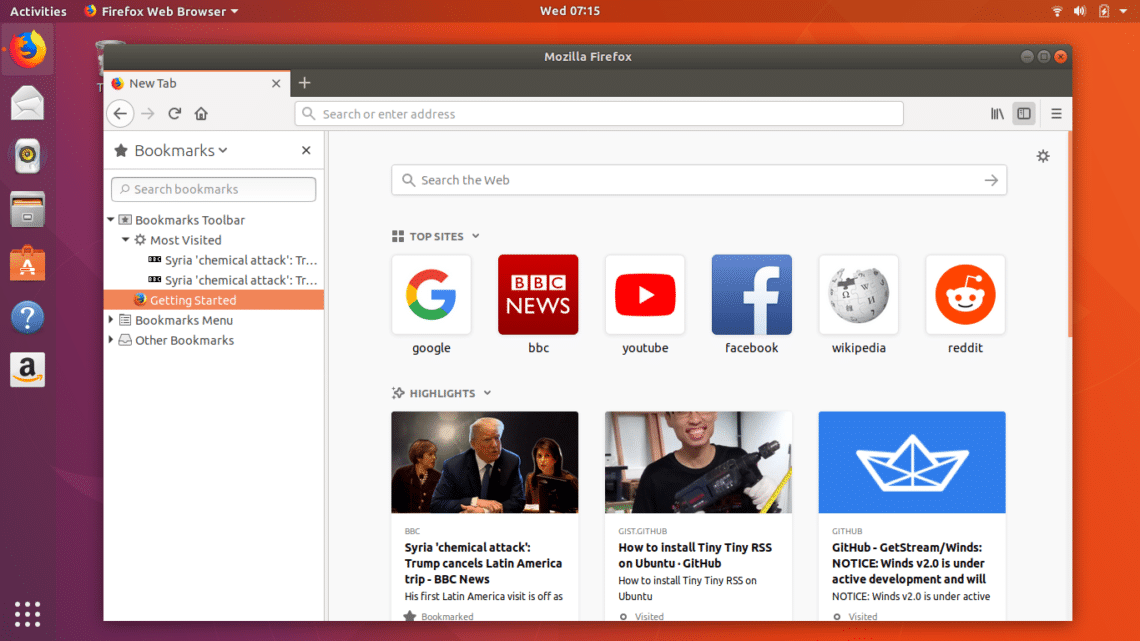 You don’t need to do any separate installation for RSS reader in Mozilla Firefox because it comes pre-installed with RSS reader.

Winds is a modern RSS reader for Linux which comes with lot of features. It has a very stylish interface which is easy to navigate. It shows you news feeds according to various categories. 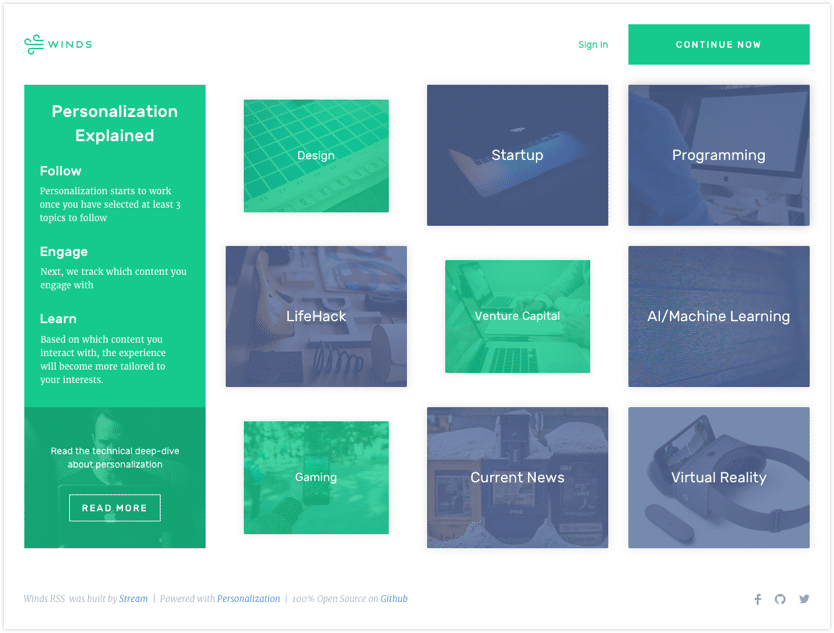 Tiny Tiny RSS is an open-source web based RSS reader which needs to be installed on web server. It offers features like OPML import/export, additional plugins and themes, podast, keyboard shortcuts, etc. 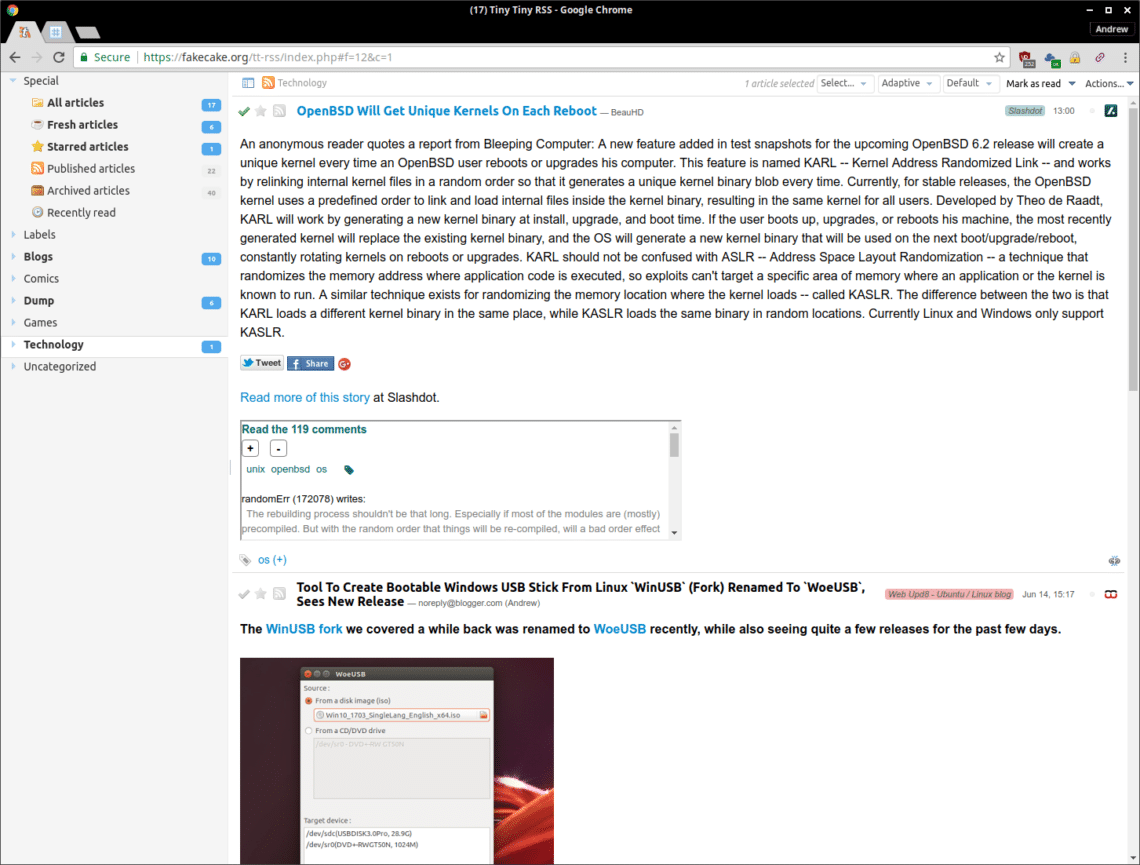 Apart from these features Tiny Tiny RSS has its own official Android client so that you can sync feeds between desktop and mobile phone.

Tickr is a free open-source GTK based RSS reader. It displays RSS feeds in Tickr bar at the top of your desktop as smooth scrolling line. Other important feature is its graphics which is highly customizable. 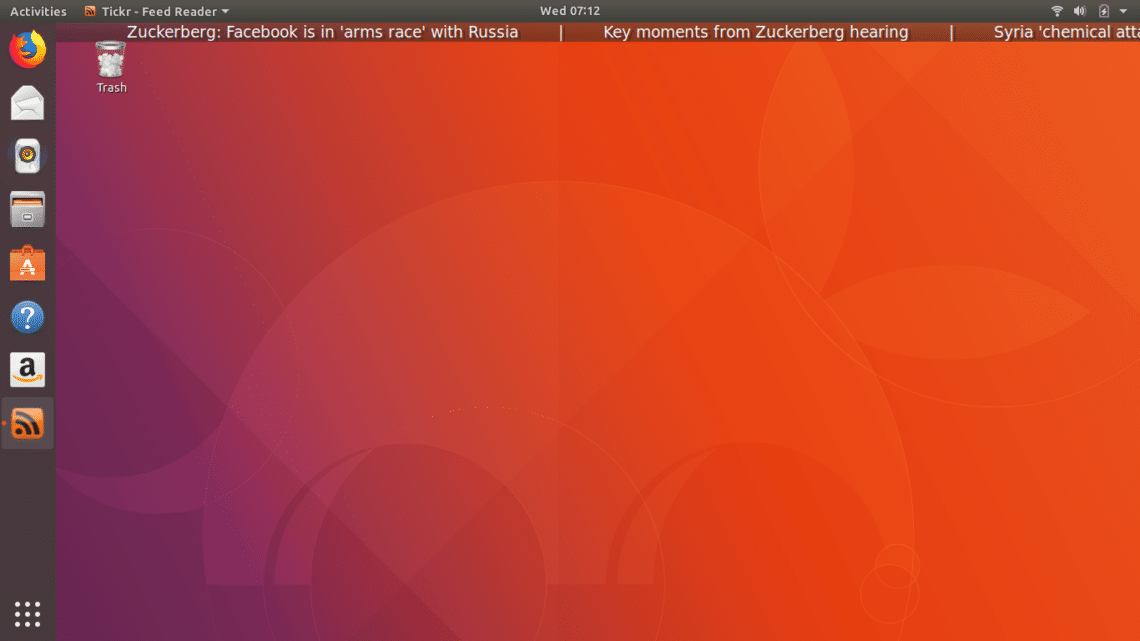 You just need to click on headline scrolling at the top of your desktop then Tickr will open it in your preferred web browser. Tickr is available to download in Ubuntu Software Centre.

So these are the Top 10 RSS Readers available for Ubuntu. If you guys use any other RSS reader for Ubuntu then share your experience at @Linuxhint